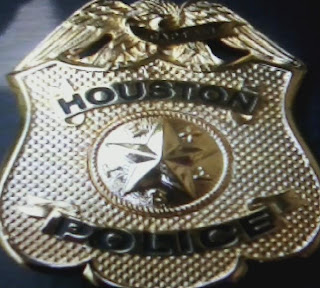 Houson, Texas police officer Matthew Jacob Marin responded to a call for a man in a wheelchair causing a disturbance at a group home.

Houston, Texas police department spokeswoman Jodi Silva said the man, later identified as Brian Claunch, cornered the officer in his wheelchair and was threatening the officer while waving a metal object.

That object turned out to be a pen.

Silva said at the time, officer Marin did not know what the object was that Claunch was waving.

She told the Associated Press, "Fearing for his partner's safety and his own safety, he discharged his weapon."

Silva said Claunch came "within inches to a foot" of the officer and did not follow instructions to clam down amd remain  still.

John Garcia, the group home's owner said Claunch, who was in his 40's, had a history of mental illness and that he had been living at the house for about 18 months.

According to Garcia, Claunch had told him that he had lost a leg above the knee and all of one arm when he was hit by a train.

"He sometimes would go off a bit, but you just ignore it," Garcia said.

According to Silva, Marin is a five year veteran of the department.

This is not the first time in Marin's career as a Houston police officer that he has fatally shot someone.

In 2009, Houston police investigators said Marin shot a man who had stabbed his neighbor to death.

Sadly, this is just another example of police officers not knowing how to deal with situations involving emotionally disturbed individuals.

As a writer and activist exposing police misconduct and corruption, I have covered many cases involving police officers unnecessarily killing mentally-ill persons.

Just this past June, in my hometown of Rochester, NY, Israel "Izzy" Andino, a mentally-ill young man was shot at least 11 times by 7 Rochester, NY Police officers.

Andino was despondent, and was walking down the street with a rifle.

RPD officers had several opportunities to subdue Andino or at least try other non-lethal measures, but instead chose to execute Andino on his 20th birthday, in a modern-day firing squad, in the middle of a residential street full of young children.

Despite the Rochester Police department having an Emotionally Disturbed Persons Response Team (E.D.P.R.T.), the team, whose creation in 2005 was lauded in the media by the RPD, is seldomly deployed, and was never called in the Andino incident.

Perhaps Clinical Psychologist Dr. Ed Reitman, speaking on the Houston, Texas police shooting of Brian Clounch, said it best. "This was an incident that didn't have to take place if the individual -- a police officer -- had been trained in dealing with emotionally disturbed individuals."