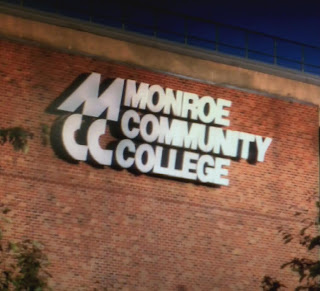 As Jumoke was driving Shavonte's car, he came to a stop near MCC's exit A, when he noticed an MCC Campus Security car behind him.

At first he didn't think much of it, as it's common to see MCC Security vehicles on campus.

As he turned onto East Henrietta Rd., it was then that he noticed the security vehicle was following him and had its lights flashing.

Looking for a safe place to pull over, he made a right onto a small access road next to the college.

What happened next is not only disturbing, but makes one ask the question -- Just what kind of individuals are being hired by colleges as security officers?

"Before I was able to bring the car to a complete stop, he was running and punching the car, it was loud bangs, I mean he was punching the rear and trunk of the car hard with his fists," said Vieux.

After Buttman punched Shavonte Barfield's 2009 Honda Civic so hard that he left dents on the car, he then came up to the driver's door and started pulling on the door latch.

When Vieux opened the door, Buttman immediately grabbed him by his arm and pulled him out of the car, then slammed him into the side of the car.

Buttman then punched Vieux in the face.

Jumoke Vieux said he couldn't believe how upset Buttman was.

"He was so angry, I mean this guy has issues," said Vieux.

Jumoke Vieux said he had no choice but to defend himself against what he called a completely unprovoked attack.

Vieux says that a passerby stopped his car and rushed over, but ended up helping the security guard instead of him.

Vieux was pepper sprayed and slammed face first into the street pavement, where Buttman handcuffed him.

Vieux suffered injuries from the assault, including contusions to his head from hitting the street.

Perhaps what is most disturbing here is that even though Vieux was the victim of an overzealous, out of control wannabe cop security officer, he ended being charged with failure to stop for a stop sign, failure to yield right of way to an emergency vehicle, resisting arrest and assaulting a police officer.

Vieux was arraigned in Brighton Town Court and released on $500 bail.

Friday September 28, 2012 is supposed to be Gregory Buttman's last day working at MCC.

He is expected to begin working for the Fairport, NY Police department.

Attempts to reach MCC's director of campus security David Moore, who just so happens to be the former Rochester, NY Police Chief, were unsuccessful.

On Friday morning, I called the Fairport, NY Police department and spoke with "Barb", a secretary, who asked me "Why do you want a comment?"

I explained to her that since Gregory Buttman is a new Fairport, NY Police officer, the community, especially Fairport residents have a right to know what the Fairport Police has to say about this incident.

The secretary told me "Police Chief Maureen Chisholm will call you if she sees fit."

Exactly one week later, no one, including Fairport, NY Police department Chief Maureen Chisholm ever returned my calls.