After Rochester, NY Police officer Stalks Woman and Smashes her Cell Phone, She Moves out of State Fearing for Her Life 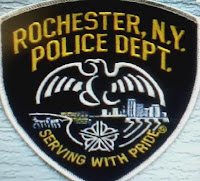 A woman who was interviewed by Rochester, NY television news media after 7 Rochester, NY Police officers shot and killed a mentally-ill young man this past summer, feared for her life so much, that she moved.

Not only leaving Rochester, but New York State.

But the woman, who has asked me not to use her real name, instead to call her "Beba", didn't just leave because of the interviews.

She left as a result of what happened immediately after she appeared on the news.

On June 21, 2012, Twenty year old Israel Andino, known as "Izzy" was executed by 7 RPD officers on Locust St., off Dewey Avenue on Rochester's northwest side.

Andino, who had mental health issues was walking down the street with a rifle.

According to Rochester, NY Police Chief James Sheppard, Andino turned and fired at officers who then, simultaneosly opened fire on Andino, hitting him at least 11 times, and riddling at least four houses, with bullets, where young children were just waking up.

Sheppard claimed that officers had no other alternative but to shoot and kill Andino, on his 20th birthday.

One neighbor pleaded with police to please allow him to talk to Andino, but police simply ignored him.

Others said that the RPD officers had several opportuinties to subdue Andino, but instead waited for the right time to kill him.

"You gave him no escape. You know you're going to die if seven policemen shoot you in the chest,” said Joel Fuentas, Andino's stepfather.

Another outspoken person was "Beba", where she made the 5, 6, 10 and 11 o'clock news denouncing the Rochester, NY Police department's execution-style killing of a mentally-ill young man.

She was also at the "Rally for Izzy" that I held on Locust St., where she recorded the rally on her cell phone.

Well, she would soon learn that the Rochester, NY Police department doesn't forget a face.

"After the interviews I noticed I was being followed by police and I had decided to leave Rochester out of fear, every time I looked over, there seemed to be a Rochester Police car, it was like they were following me," she said.

They were following her.

Approximately two weeks after she appeared on the news, already having decided to move out of Rochester, she was sitting on her Lake Ave. apartment building steps when a Rochester Police cruiser drove by slowly.

Then, the car stopped, and a Rochester, NY Police officer gets out, and walks over to her and asks her "Where do I know you from?"

The woman, uncomfortable and thinking the officer was perhaps trying to flirt with her, replied "I'm not from around here."

Then the RPD officer asks her "Are you trying to be a smart ass?"

The officer then snatched her cell phone from her hands and smashed it on the sidewalk.

"I asked him why he did that, but he laughed and got in his car and just drove away," she said.

She added, "There is no justice."

When I asked her why she left Rochester, she replied "I feared for my life, and after that I couldn't live in Rochester peacefully."