Wegmans Food Markets Consumer Affairs Manager: "I am sorry... this whole situation was handled completely inappropriately from the get-go." Then offers me a $100 Gift Card after I get Sick from eating Raw Chicken

According to Wegmans Food Markets if you get violently sick, including vomiting and diarrhea, after eating partially raw, undercooked chicken wings from their pizza dept., then get a run-around from store management, it's worth a $100 Wegmans gift card.

On Friday January 4, 2012, I purchased a pizza and chicken wing combo from the Wegmans on Monroe Ave. in Pittsford, NY.

My 12 year old niece was having a sleepover 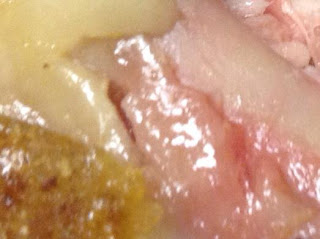 and her, and my sons ages 9 and 11, wanted
a night of pizza and movies.

Upon returning home, we were so hungry that I
set up the movie, opened the pizza box and the
plastic container of chicken wings, and we
dived in.

Fortunately, the kids are not crazy about wings.

About 15 minutes later, after I had eaten most of the wings, I asked my niece why she hadn't touched hers, that was still on her plate.

"Uncle, it had blood." she replied.

I turned on the living room lights, went into the kitchen and could not believe what I saw on my plate.

I immediately called the Wegmans store and was transferred to the perishable foods manager, Mr Dan Karr who was somewhat non chalant about my experience.

I explained to him what had happened and asked him if he could provide me with an email address so I could send him photos I had taken of the undercooked, raw chicken.

I had to ask him a second time for an email address before he provided one.

I asked him to please contact me as soon as he received the photos so I at least knew he had gotten them.

He assured me he would contact me in a few minutes.

I woke up early Saturday morning around 4 am feeling sick.

I ran into the bathroom and threw up twice, what I describe as very violent vomiting, you know, when you vomit so hard that it comes out before you get a chance to make it to the sink or toilet?

I went back to sleep only to wake up around 8 am to throw up again, this time not as bad as the first.

I had chills and my stomach hurt really bad.

I called my doctor's office answering service and a few minutes later, the doctor on call returned my call.

I asked him if I should go to the ER, and he told me to sit tight and let it get out of my system.

He explained that although uncomfortable, the fact that I had thrown up several times was a good thing as it was getting out of my system.

He told me to drink slot of fluids and rest.

When I woke up Sunday, just when I thought it may be over, the diarrhea started.

Although the vomiting had stopped, my stomach muscles hurt bad.

Perhaps from throwing up so much.

Throughout the entire weekend, apart from the fact that I had purchased and consumed raw chicken, and had gotten sick, what bothered me the most was how Wegmans, a company I have always respected and patronized, had handled it thus far.

I mean, the fact that a customer calls the store to report to them that he has just eaten food that was not properly cooked, then sends the manager photos and then never hears back from the manager, despite being told that he would call, left a very bad taste in my mouth--no pun intended.

I mean where is the 'customer service'?

Is this how a Top 100 company deals with a situation where a customer has just eaten raw food?

Monday morning I called Wegmans Corporate offices and was transferred to the Consumer Affairs department.

A woman took down my information and then said that someone would be calling me.

About an hour later I received a missed call from the Dan Karr, the perishable foods manager at the Pittsford store.

Interestingly, he never called me on Friday like he said he would, but he calls after I contact Corporate... hmmm.

I called the store and after about 10 minutes of being on hold and having at least three different employees come on the phone, asking me who I was waiting for, I was put on hold again.

Finally someone picked up only to tell me they couldn't locate the manager, and to please hold, again.

I called Corporate again and told them my patience was running out.

I told them just how disappointed I was.

I explained to them that as a loyal Wegmans customer of over 30 years, this was completely unacceptable.

A woman told me she would talk to her manager and that someone would be contacting me.

A while later, I spoke with a woman named Terri in Consumer Affairs.

And then, just when I thought it could not possibly get any worse... it did.

To say that what Terri said to me was 'adding insult to injury', would be an understatement.

Terri told me that she didn't think my getting sick had anything to do with the fact that I had eaten raw chicken.

I couldn't believe it.

After I had spent the entire weekend either hunched over a toilet or sink, throwing up or having diarrhea, or in bed, now this?

Not only to do I get a run-around from management, but now this woman has the nerve to tell me this?

After my conversation with Terri was over, I called Consumer Affairs again, this time asking to speak to the highest person in charge.

I spoke to a woman named Michelle.

I explained to her what Terri had just said to me.

Michelle apologized and told me that her manager would be calling me.

As I was picking my children up from school, Mary Joan Stryker the Consumer Affairs manager left me a voice message apologizing for what she refers to as "This whole situation was handled completely inappropriate from the get go."

I then called Ms. Stryker back and we some for a while.

She continued to apologize and even told me that Terri's comments were out of line and uncalled for.

She even apologized after she asked me if the first time I had called the store, on Friday, if the manager had ever offered to refund my order, and I replied, "No he did not."

Then, towards the end of the conversation, after having seemed very empathetic to my experience, Ms. Stryker asks me, "So, how can we make this up to you?"

I replied, "I don't know, ma'm, how would you want it handled if it were you or your loved one?"

Mary Joan Stryker then said "There's no price for what you went through, how about a gift card for $100 ?"

After consulting with my attorney, he recommended that I explain to them that perhaps, had it been properly and professionally handled from the beginning, a gift card would have sufficed, but given that there were actually two wrongs here, first, undercooked raw food, second, poor customer service, it was worth a bit more.

At the end, I was given a $250.00 gift card which includes the refund for my original purchase of raw chicken.

It will be a while before I eat Wegmans chicken wings again.

It continues to bother me just how Wegmans, a Top 100 company, has responded to this incident.

Listen to how rude Colleen Wegmans secretary, Ms. Rebecca Lessing was with me when I called to speak with Mr. Danny Wegman.