What Rochester, NY Police Chief James Sheppard Did Not Want the Public to See 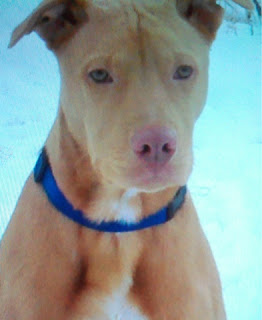 WARNING: The photos below are very graphic in nature. They show Codi, an innocent, scared, lost pet which was executed by Rochester, NY Police officer Chris Burgstrom.


PLEASE SUPPORT MY WORK EXPOSING INJUSTICES SUCH AS CODI'S.

AMERICANS DONATE MILLIONS OF DOLLARS EVERY YEAR TO ORGANIZATIONS LIKE THE HUMANE SOCIETY, WHO DOES NOTHING WHEN AN INNOCENT FAMILY PET IS EXECUTED BY POLICE.

AS AN ACTIVIST, I EXPOSED ROCHESTER POLICE OFFICER CHRIS BURGSTROM WHEN MAINSTREAM CORPORATE-RUN MEDIA REFUSED TO.

IF YOU BELIEVE IN MY WORK, PLEASE SUPPORT IT BY MAKING A DONATION UP TOP.

Tuesday morning, exactly a week to the day that Codi, a scared, injured, lost dog was executed by Rochester, NY Police officer Chris Burgstrom, while his owner Steven Jodoin Benus searched everywhere for him, Codi's remains were finally released to Steven.

But not before Rochester, NY Police Chief James Sheppard did everything he could in order to avoid releasing Codi's remains.

Chief Sheppard even had the nerve to get in front of television cameras and question the fact that Steven was Codi's owner.

Codi was just 5 months old when Steven rescued him from a home near his job on Rochester's northeast side.

"I actually saw Codi being born, then as he grew I realized he wasn't being taken care of. His collar was gouging his skin, he was dirty, he had fleas and worms when I got him." said Steven.

Sheppard used the fact that Steven was not Codi's original owner as a loophole to not have to release the remains.

To call what Sheppard did by putting a grieving owner through the red tape and uncertainty of being able to retrieve his dog, after his best friend was executed by a trigger-happy Rochester cop, an insult to injury, would be an understatement.

What didn't Chief Sheppard want the the public to see?

What was Chief Sheppard and the Rochester, NY Police department hiding?

The answer is now clear.

Chief Sheppard did not want Codi's remains to be released because the fact is that Rochester, NY Police officer Chris Burgstrom shot Codi from behind.

In the back of his head.

Codi was not charging anyone.

After having been struck by officer Burgstrom's police cruiser, Codi, injured, and scared, ran onto the pier at Lake Ontario Park in Charlotte, where officer Burgstrom hunted him down, shooting the innocent pet in the back of his head as the photos clearly show.

Tuesday morning, I went with Steven to retrieve Codi's remains.

I then accompanied Steven to East Ridge Animal Hospital in Irondequoit, NY, where Dr. Gino Sementa performed a gross necropsy on Codi's remains.

Although the photos below are very graphic in nature, it is important that people see what Rochester, NY Police officers do to innocent, scared, lost pets like Codi. 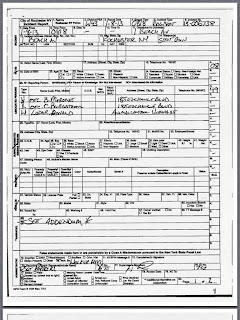 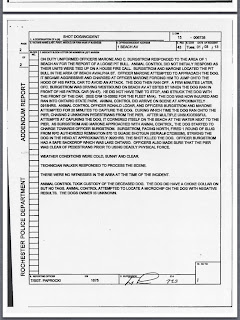 
If you believe in my work, exposing police misconduct and corruption, and covering issues mainstream media chooses to ignore, please support my work by clicking on the "Donate" button at the top right of my blog and entering your donation.