North Carolina Police Execute Alligator, then Hang it by Ropes, Showing It Off in a Public Display

A woman in Jacksonville, North Carolina was walking her 80-pound Husky dog and let it run close to the edge of water near a shopping mall, when a 500-pound alligator snatched the Husky, and ate it.

Beth Purcell, a Public Safety spokeswoman, said officials had the option of capturing and relocating the alligator, and in fact discussed it, but instead chose to kill the alligator "in the interest of public safety." 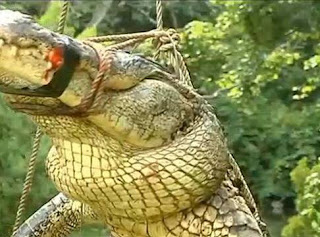 North Carolina police fired at the alligator three times with a high-powered rifle, on Wednesday, leaving the reptile to die underwater, before recovering its body later in the day.

Don't get me wrong, I love animals.

I grew up in a home where my Dad had many dogs over the years.

While it is sad what happened to the Husky, I find it disturbing that having had a choice to capture and relocate the alligator, North Carolina police and wildlife officials, instead chose to kill the animal. 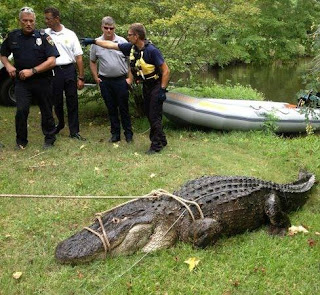 I mean when you think about it, this land, this country, belongs to them.

They were here before us.

The alligator did nothing other than do what it knows to do.

But perhaps what I find even more disturbing is police officials hanging the alligator's body by ropes and publicly displaying it like some sort of prize, while onlookers took photos and video.

Personally, I think that is more barbaric than the alligator eating the dog in the first place.

Reminds me of a saying my dad used to say.

In English: "Humans are animals with clothes."

My dad was right.

Humans are animals themselves.\

And I find the whole thing very hypocritical, I mean police officers have been shooting and killing innocent family dogs in this country for years... should people hunt them down and kill them too?