On April 2, 2012, Rochester, NY Police officer Joel Hasper who works the RPD east side division's "PSA 23" sector, was one of several Rochester Police officers who beat Jose Lugo on Flower St., as Lugo was walking to a neighborhood grocery store.

According to Hasper, and his fellow officers Kevin Flanagan, and Richard Doran, Lugo looked suspicious because one of Lugo's hands was covered by his jacket sleeve.

They also claimed they stopped Lugo because he was trespassing on an abandoned home on Flower Street. 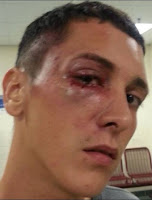 Lugo, who has lived on Flower St. since he was a child, had simply stopped to say hi to some friends, on his way to the store.

As for his hand not being visible?

His jacket had long sleeves.

Not a crime to have long sleeves, is it?

Well, Lugo was punched, kicked, and tasered RPD officers, who then arrested him in an attempt to justify their actions, and charged Lugo with assault on a police officer. 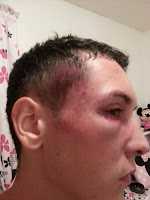 Rochester Police officers also pepper sprayed neighbors who pleaded with the officers to stop beating and tapering Lugo, including a pregnant, and an elderly woman.

Even Lugo's aunt, who was on her phone calling Rochester, NY Police Chief James Sheppard, whom she used to work with when Sheppard was the Rochester City School district director of security, was pepper sprayed, and arrested.

Lugo suffered multiple injuries, including a badly bruised eye which was swollen shut, as well as other abrasions, and contusions from being punched and kicked.

He also had several injuries from the prongs of the taser.

And again Hasper replied, "I performed a distractionary jab."

Jose Lugo was found not guilty.

One female juror, who did not want to be identified, for fear of retaliation by Rochester Police, said "The police officers were overzealous, it's like each officer was like a billboard, saying just because we are police officers we can do what we want."

The woman said she was especially disturbed by how Rochester Police officers shoved Annette Velazquez, Lugo's aunt, and pepper-sprayed and arrested not only her, but other witnesses, including the pregnant woman.

"They feel they have the advantage and since they are equipped, they think, the law is going to side with me", said the juror.

On Sunday August 11, 2013, around 6:30 pm, 23 year-old Jonathan Aquino saw his brother in law, and several of his friends, who were riding motor bikes, had been pulled over by Rochester Police officers on Hollenbeck St.

Aquino, whose English is not too good, asked a Rochester Police officer what was going on with his friends.

"The officer became angry and began yelling at me, right in my face", said Aquino, adding, "I tried to explain to the officer that those were my friends."

"The officer then yelled at me "Oh, those are your friends, and pepper sprayed me right in my face, then pushed me back", said Aquino, in a phone conversation with me.

None other than Rochester, NY Police officer Joel Hasper.

Jonathan Aquino says he then fell to the pavement, bleeding, and it was then that Rochester, NY Police officer Joel Hasper, and another officer then put their knees on the back of his head, and back.

Aquino was then transported to the RPD's east side division office on North Clinton Avenue, where a laughing officer Hasper, and other RPD officers took photographs of his injuries, before transporting him to Rochester General Hospital, where x-rays showed a fracture to his cheekbone.

Aquino also received stitches for a cut under his right eye, before being taken to Monroe County Jail, where he was booked on one count of Disorderly Conduct, and one count of Resisting Arrest.

One of those segments, titled "Rochester's Finest, RPD Officer Joel Hasper", featured Hasper talking about his job, as reporter Kevin Doran went on a ride-along.

After mentioning that his father is a minister, Hasper ends by saying "Every night I go home I can't go to sleep."

I don't think I'd be able to sleep either officer Hasper, if I beat innocent people, then violated their rights, by falsely arresting them, in order to justify my actions.