Disabled Woman Claims Rochester, NY Police officer Brian Phillips Threatened her Life; "I can kill you and get away with it." 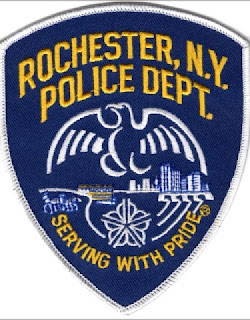 The woman's son, who works for a security company which is owned by a Rochester, NY Police officer, contacted me asking for my help.

Laurie Ramos, 48, says Rochester, NY Police officer Brian Phillips showed up to her home at 89 Grape St., on Rochester's west side, with a woman who was babysitting Ramos' grandchildren.

That woman called police after Ramos told her she would not be able to watch her grandchildren because of her disability.

Laurie Ramos suffers from fibromyalgia, as well as a herniated disc, and back problems.

She can't stand or sit for prolonged periods of time, and takes medication which often causes her to go to sleep.

Ramos says her doctor gave her strict orders not to watch young children, in order not to exacerbate her condition.

According to Ramos, she tried explaining to Rochester, NY Police officer Brian Phillips, that as a result of her condition, she would not be able to watch her grandchildren.

That's when Ramos says that officer Phillips lost it.

"He was yelling at me that I had to watch the kids," says Ramos.

"The officer kept yelling at me saying that I had no choice, that I had to watch them."

Ramos said officer Phillips then told her "I have no time to deal with people like you."

"I kept trying to tell him that I am not supposed to be watching any children, but he didn't care," said Ramos, adding, "Then he gets right in my face and tells me right in front of the children, 'You're pissing me off, you piece of shit, I can kill you and get away with it, because I'm a cop and they'll just cover it up.'

"He then told me to get in the house, and then he closed my door," said Ramos.

Ramos says that's when she called 911.

"I told the dispatcher that an officer just threatened to kill me," said Ramos.

Ramos said she asked to see a supervisor.

According to Ramos, when she came back outside her home, she could see the officer was sitting in his car talking on the phone, across the street from her house.

"I could hear him and he was talking to someone," said Ramos.

Ramos said that the officer told whoever he was on the phone with, "Yeah I told her she pissed me off and I told her she's a piece of shit."

After waiting at least a half hour, Ramos says she called again asking for a supervisor, who did come after about about another half hour.

Ramos says the officer who came, was a Rochester Police Sgt., who told her the officer's last name was Phillips.

After asking the Sgt. why would he have an officer like that working for him, Ramos says the Sgt. told her, "I didn't hire him."

Ramos said the Sgt. told her to go to the RPD's Internal Affairs Monday morning, and file a complaint against officer Phillips.

Sgt. Stewart, who I want to point out, was very professional, gave me the officer's full name, and IBM #.


If you believe in my work, exposing police misconduct and corruption, and covering issues mainstream, corporate-America run news media chooses to ignore,  please support my work by clicking on the "Donate" button at the top right of my blog and making a donation.