Those who follow me and my work exposing police misconduct and corruption, know I'm a strong advocate of the right to record, especially when it comes to photographing and video recording law enforcement officers performing their public servant duties.

Or in this case, not performing.

But rather sitting, killing time. 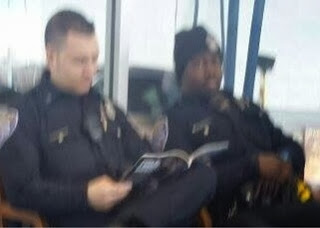 Thanks to a young woman who not only knows, but most importantly, is not afraid to exercise her first amendment right to record, we're once again able to get a glimpse into yet another example of Rochester, NY Police officers misusing taxpayer dollars.

The photo to the right shows two Rochester, NY Police officers, one reading magazine, the other staring down the young woman who took the photo, waiting for the cruiser to be detailed at a Delta Sonic located at 718 East Main Street, in Rochester, NY, Sunday, around noon.

So it's interesting how Delta Sonic employees had access to the Rochester Police cruiser.

Access to the shotgun (although usually locked), and the onboard computer, etc.

All while one officer reads the latest edition of Car and Driver magazine, and the other stares down a young woman.

In a city with an increasing homicide rate, including most recently, a triple homicide, a city which is ranked the 5th poorest city in the U.S., taxpayers should be disgusted that their hard earned dollars are paying for Rochester, NY Police officers to sit around reading magazines while having their police cruiser detailed.

There you have it, Rochester, NY, your hard earned taxpayer dollars at work.