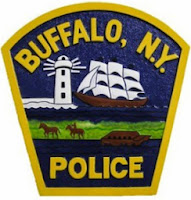 It's not clear when the 1 minute, 21 second video, which was shot in the area of Ontario and Philadelphia Streets, was recorded, although details
on YouTube posted by CopBlock read that the incident took place on April 24th.

The video shows a man lying face down on a sidewalk near a corner store, with two Buffalo cops on top of him.

One of the cops is then seeing kneeing the man at least 5 times.

Each time the officer knees the man, he goes back as if to get more impulse for the next knee strike.

Two more police officers arrive, then one of the officers is seen punching the man in his head and face area at least three times.

A 5th officer then pulls up, as one of the Buffalo cops can be seen resting his body weight on his knee, which is placed on the back of the man's head.

Towards the end of the video, that same officer gets up, strikes the man in his head, kicks him, and strikes him a second time.

At a news conference Monday morning, Buffalo, NY Police Commissioner Daniel Derenda looked more annoyed than concerned, about the disturbing video showing his officers kneeing, kicking, and striking a handcuffed man, as the man pleaded for them to stop.

Just about every question asked of Derenda, he had one answer.

About the only piece of good information to come out of the press conference was that that Derenda confirmed that the incident took place on Saturday April 19, 2014, around 10:30 p.n. on Philadelphia and Ontario Streets in Buffalo.

Derenda also said he has been in touch with the U.S. Attorney's office, as well as the F.B.I.

When asked what he thought of the video, Commissioner Derenda would not comment.

Reporters asked Derenda what is the protocol for officers when they witness a fellow officer or officers engaging in excessive force.

Derenda replied "They should be reporting it to a supervisor," adding, "We don't condone or tolerate inappropriate behavior."

"Bad actions by a few should not tarnish their badges."

Derenda said they are working on identifying the officers.

An attorney claiming to represent the man beaten in the video, identified him as John Willet.

Buffalo, NY Police Commissioner Daniel Derenda didn't make any mention of this at his morning press conference, but 6 Buffalo, NY Police officers involved in the beating have been placed on administrative leave pending the ongoing investigation.

The man who recorded Buffalo, NY cops beating a handcuffed African-American man lying face down on a city sidewalk says that Buffalo, NY Police officer John Cerulli asked him to delete incriminating footage showing him and other officers beating the man.

The man, who asked to remain anonymous out of fear of retaliation by Buffalo Police, says that as soon as he saw Buffalo Police officers push the man, who has been identified as John Willet, to the ground, he began recording with his cell phone.

And that's when officers saw him recording.

The man says that one of the officers in the video tapped a fellow officer on the shoulder, when he saw the man recording them.

And according to the man, that's when a Buffalo, NY Police officer, the same one seen in the video kneeing, kicking, and striking the handcuffed man, walked over to him.

That officer is John Cerulli.

"Give me your phone, or delete the video, or I'm going to take your phone as evidence," the man says Cerulli told him.

The man, thinking ahead, had already switched phones with a friend who was with him.

He then told officer Cerulli that he had deleted the video.

Officer Cerulli then grabbed the phone checked it, and thanked the man.

Thanks to the man's quick thinking, a video of Buffalo, NY Police officers beating an innocent, handcuffed man is now going viral.

Unfortunately what Buffalo Police officer John Cerulli did, intimidating the man, in essence threatening him if he didn't delete the video, is a very common practice among law enforcement officers.

Especially when the cop knows he of she has just been captured on video, beating someone.

Perhaps more disturbing than the typical, well known police intimidation tactics, is that many people don't realize that not only is it perfectly legal to photograph and video record law enforcement officers, protected under the first amendment, and many folks don't know that a police officer can't just take your phone away, especially without a warrant.

Not only is a police officer ordering a citizen to let them see their phone, or asking that citizen to delete photos or videos improper, but it's in clear violation of the first amendment, but also the fourth amendment, which protects against illegal search and seizures, as well as the fourteenth amendment, because that police officer would be taking someone's property without due process.

So, like I always say... COPS LIE. RECORD EVERYTHING.


WARNING: The video is especially disturbing to watch, and hear, as the blows to the man can be clearly heard, as can his cries for help.