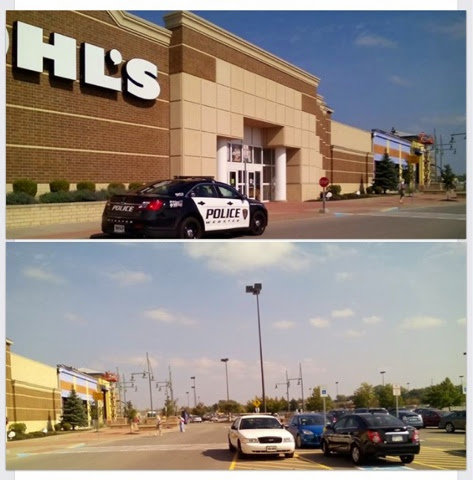 Webster, NY Cops Don't Care Where They Park
Even If It's Blocking a Handicapped Parking Zone

The first is an overall 'Above The Law' mentality.

The second is a sense of entitlement.

The two actually go together.

In fact they compliment each other.

You see, law enforcement officers truly feel they are above the law.

Ironically, the very same law which is their duty to 'enforce'.

We see it everyday.

In New York State for example, it is illegal to talk on your cellphone while driving.

Police will not hesitate to pull you over and hit you with a fine.

Yet how often do we see Officer Friendly laughing his ass off on his phone as he drives by us?

Of course, I'm sure if you were to ask Officer Friendly or any of his superiors about him using his phone while driving, before you could get the words out of your mouth, they'd justify it with two words to describe why he was on his phone.

That's just a small example of the above the law mentality.

Which leads to the sense of entitlement which law enforcement officers have.

Take, for example, the photos above which a Monroe County, NY taxpayer sent me Saturday afternoon, by a smart, alert, and concerned taxpayer who was ready to document the above the law mentality which cops have.

As you can see, the Webster Police cruiser in the top photo is illegally parked in the fire lane.

Something YOU or I are not permitted to do.

In fact, YOU or I wouldn't even be allowed to stand there to laid our vehicles, without some cop telling us to move because we are blocking the fire lane.

Now, even though the photo of the Webster Police cruiser illegally parked in the fire lane is disturbing, it's the second photo which is downright disgusting.

As you can see, that photo shows Webster Police cruiser 9149, illegally parked in a handicapped loading zone, right next to a handicapped parking space.

Those bright yellow lines are there to allow vehicles outfitted for the handicapped to unload and load wheelchairs for handicapped persons.

But that Webster, NY Police officer could care less.
Because he or she obviously feels they are above the law.
And entitled.
Contact Webster, NY Police Chief Gerald L. Pickering at  (585) 872-1216 Ext. 240
Note: if you believe in what I do, exposing police misconduct and corruption, if you enjoy reading this blog, or even if it's your first time stopping through, please consider supporting my activism and my film 'A Promise to My Dad', by making a donation.
To make a donation, look for the 'Donate' button on the top right of the page.
All transactions are secure and go through Paypal.
Thank you.