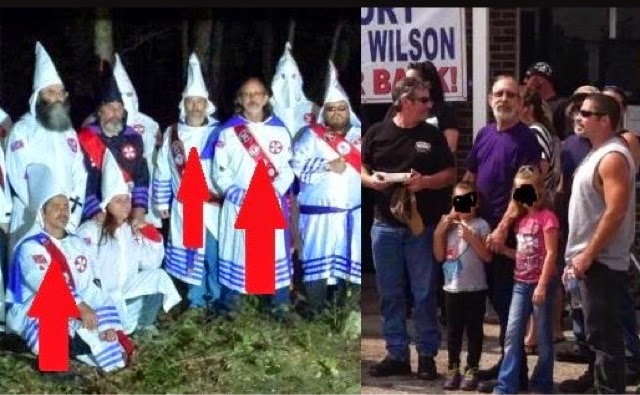 Wilson, who claimed that Brown charged at him after he stopped the teen and a friend who were walking from a nearby convenience store, shot at Brown 12 times, including a fatal shot to the head.

Despite Wilson's claims that he was in fear for his life after Brown punched him in his face several times, photos taken at the hospital show no visible injuries to Wilson's face.

Within a couple of hours after the press conference, protesters took to Ferguson streets, setting police cars and buildings on fire.

Friday, Jay Syrmpoulos, a contributor for one of my favorite sites, The Free Thought Project, wrote a great piece in which he delves into the discovery by Anonymous, who claims they have evidence that ties officer Darren Wilson, and the Ferguson Police department to the Ku Klux Klan.

Check out the piece by Jay Syrmpoulos below:

Ferguson, Mo. – The hacker collective Anonymous launched #OpKKK and #HoodsOff this past week which took down, and took over, multiple klan websites and social media accounts while exposing numerous Ku Klux Klan members by making their personal information public.