Illegal and Banned in Some States, SAP Gloves Are Law Enforcement's Equivalent of Brass Knuckles 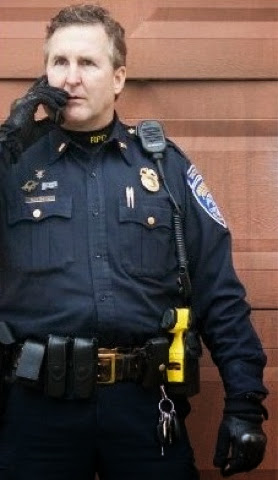 Under New York State Penal Code 265.01, if you're caught possessing a pair of brass knuckles, you'll be arrested and charged with fourth degree criminal possession of a weapon.

Not only are brass  knuckles, or any sort of metal, or hard plastic knuckles, commonly referred to as "knuckle dusters" or "knucks", considered dangerous because they can be easily concealed, but they're also considered lethal, because of the types of injuries they can inflict, which can include concussions and broken bones, and in some cases have resulted in death.

Ok, so possessing any sort of metal, or hard plastic over your knuckles, which can be worn on your hands and used to hit someone and cause them serious injury, or even death, is illegal?

Unless of course, you're a Rochester, NY Police officer.

Then, well, pretty much anything goes.

Take, for example, Rochester, NY Police Lieutenant Eric Paul, who works out of the RPD's Tactical Unit, the most corrupt division within the RPD, known for their extortion shakedowns, home invasions, violent beatings, racial profiling, and civil rights violations of innocent citizens.

As you can see in the photo above, (Click on photo and zoom to see full view), Lt. Eric Paul is sporting a pair of SAP gloves.

SAP gloves, which are illlegal in California and Masachusetts, are made from leather, or other synthetic materials, and contain lead or steel which is sewn in to special pouches covering the knuckles, as well as the back of the fingers and hand.

I reached out to my good friend Alex Salazar, to see what he thought about SAP gloves.

Alex is a former L.A.P.D. officer who owns All American Investigatiions.
Many years ago Alex saw the light, when he realized that he could no longer be part of the abuse and corruption that the L.A.P.D. is notorious for.
The same abuse and corruption that comes with the "Thin blue line" and the "Code of Silence" which law enforcement  officers subscribe to.
So Alex Salazar decided to dedicate his life to being a voice for victims of police misconduct.

"Those went out ages ago, they're illegal here in California because they're lethal."

Some SAP gloves are easily distinguishable, with the bulky lead or steel bumps over the knuckles, but some  police officers choose to wear a style of SAP gloves which look like ordinary leather gloves, in order not to raise suspicion, or give away the gloves' lethal contents.

I wonder how many innocent citizens Rochester, NY Police Lt. Eric Paul has tried his SAP gloves out on.

PLEASE SUPPORT MY FILM, 'A PROMISE TO MY DAD' 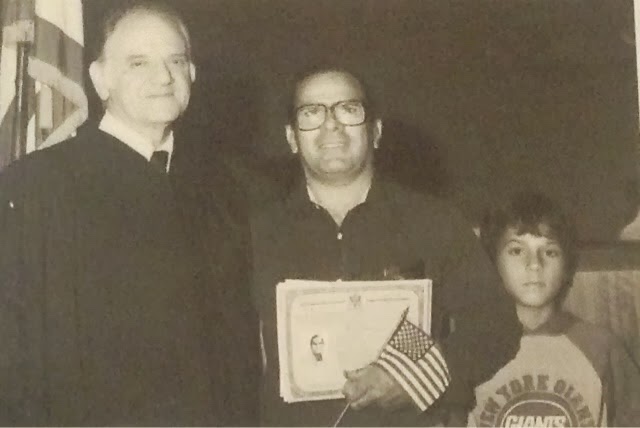 My Dad (center), me, and the judge
when my Dad became a U.S. citizen.
My Dad was so happy that day.

'A Promise To My Dad' is a documentary film about a promise I made to my father at his wake, after he committed suicide.

The short film will explore my dad  Mario Vara's life as he leaves Cuba with my mom and my brother in 1968, in search of freedom and a better life for his family.

After moving to Rochester, NY, my dad realized that despite the promises of freedom and liberty that a life in America held, the harsh reality is that there are also many injustices as well.

In fact, my Dad will soon face very similar 'police state' tactics, as the ones he escaped his homeland for in the first place.

'A Promise to My Dad' highlights an incident in the 1980's, when Rochester, NY Police officers Mark Mariano and Randall Benjamin kicked down our home's front door, and illegally entered out home, terrorizing our family at gunpoint, even threatening to shoot our dog.

As a result of this incident. my father Mario Vara became outspoken against police abuse and misconduct.

Unlike many Americans who take their rights for granted, my Dad took a stand to denounce law enforcement violating U.S. citizen's civil rights.

Having lived a communist dictatorship, my father knew all too well what it was like to live in a totalitarian police state, where simply expressing one's dislike for Castro and his government could land you in prison.

My Dad was passionate in his denouncement of rogue cops abusing and violating citizen's civil rights in the U.S.

As a teen. I would tag along with my Dad and accompany him to community meetings, rallies, and marches where my Dad demanded accountability from those whose job is to serve and protect, as well as the elected officials whose job it is to keep them in check.

'A Promise To My Dad' features me telling my Dad's story, including talking about my father's depression and how it led to my father committing suicide in 1993.

'A Promise to My Dad' follows me as I struggle to keep the promise I made to my father to continue his work against police misconduct and corruption, while at the same time trying to find my own identity as a young man, then as a father myself.

Throughout the film I will confront my own struggles with depression, my father's suicide, and the effects that my work has brought to me and my family, including my children having received death threats.

One example of this came in August of 2014, when an ex-con who is known to work with the Rochester Police Department, as a paid confidential informant (C.I.) was captured on a store's surveillance video threatening to murder, and decapitate my 5-year old daughter.

Despite the video clearly showing the individual threatening to kill and decapitate an innocent child, Rochester Police and the Monroe County, NY District Attorney's office refused to charge the individual.

Please support my film "A Promise to My Dad" by making a donation.

Just click on the 'Donate' icon located at the top right of this page and follow the easy steps.

All donations are secure through PayPal.

Just be sure to include your address when making your donation.

Click link below for more on 'A Promise to My Dad'.