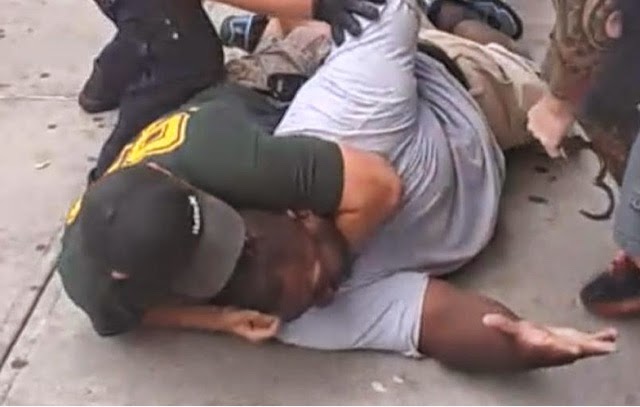 The July 17, 2014 incident which was captured on video, began when officer Pantaleo, an 8-year veteran of the NYPD, along with other officers, approached Eric Garner on a sidewalk, for what the NYPD says was suspicion that Garner was selling untaxed, loose cigarettes.

In the video, Eric Garner is heard telling officers, "Every time you see me, you want to mess with me. I'm tired of it. It stops today," Garner shouts. "I'm minding my business, please just leave me alone."

That's when NYPD officer Daniel Pantaleo comes up from behind Garner and uses a department banned choke hold, prohibited by NYPD departmental policy since 1993.

Then, while officer Pantaleo is choking Eric Garner out, cutting off his breathing, at least three more NYPD cops grab Garner, bringing him down to the sidewalk.

Gasping for air, Garner pleads with officers, as he tells them, "I can't breathe."

Eric Garner is heard making that plea to officers. telling them he can't breathe, 11 times.

The video then shows NYPD officer Daniel Pantaleo pushing Eric Garner's face into the sidewalk with his hand, as Garner continues to repeat his plea to officers.

What we see on that video at that point is Eric Garner, a man who repeatedly pleaded with NYPD officer Pantaleo as well as other officers, that he couldn't breathe, now laying motionless on the sidewalk.

What else does the video show?

It shows that the NYPD cops refused to render any kind of medical assistance to Eric Garner.

Even an EMT is seen refusing to render aid.

All over loose cigarettes.

And the video shows it.

Not only did NYPD officer Daniel Pantaleo use a chokehold which is banned by his own police force, but he used it in a situation which actually didn't call for any force.

IT WAS EXCESSIVE FORCE.

For this grand jury not to see what millions saw on the video--MURDER, and for them not indict NYPD officer Pantaleo, and have him stand trial, is DISGUSTING.

THAT POLICE OFFICERS ARE NOT ONLY ABOVE THE LAW, BUT THAT THEY CAN AND WILL CONTINUE TO KILL INNOCENT PEOPLE.

AND GET AWAY WITH IT.
I don't get it.
We all saw a video of a man being choked to death.
The same video the grand jury saw.
If a grand jury refuses to indict a cop after seeing a video which shows excessive force in the form of a police department banned chokehold, and an innocent man dies as a result, then what does it take for a grand jury to hold a cop accountable?
What does it take for a grand jury to decide that a cop should stand trial?
And what good will police body cams do, if a video of a cop killing a man with a lethal chokehold is not enough to hold him accountable and force him to stand trial?
After the incident in July, New York City Mayor Bill de Blasio, who seemed disgusted with Eric Garner's murder, had the following to say.

"I watched it the same way a family member would watch it, and it was very sad to watch," de Blasio said, referring to the video.

Wednesday afternoon, de Blasio, whose son is African-American, seemed visibly upset during an emotional news conference after the grand jury's decision not to indict Pantaleo.

"I couldn't help but immediately think of what it would mean to me to lose Dante," Mayor de Blasio said, referring to his son Dante.

Mayor de Blasio added, "We've had to talk to Dante for years about dangers he may face."

"I've had to worry over the years, Is my child safe?

"And not just from harsh realities…crimes and violence…are they safe from the people they want to have faith in?," de Blasio said referring to police.

As of 10 p.m. Wednesday night, 30 protesters had been arrested by the NYPD.

“If they engage in criminal activity, such as vandalism, actual crime, they will be arrested, quite simply," Bratton said, adding, "But we have the ability to have a level of tolerance--breathing room, if you will."

It's interesting you use the words "breathing room" Commisioner Bratton.

Because your officer didn't give Eric Garner any breathing room.