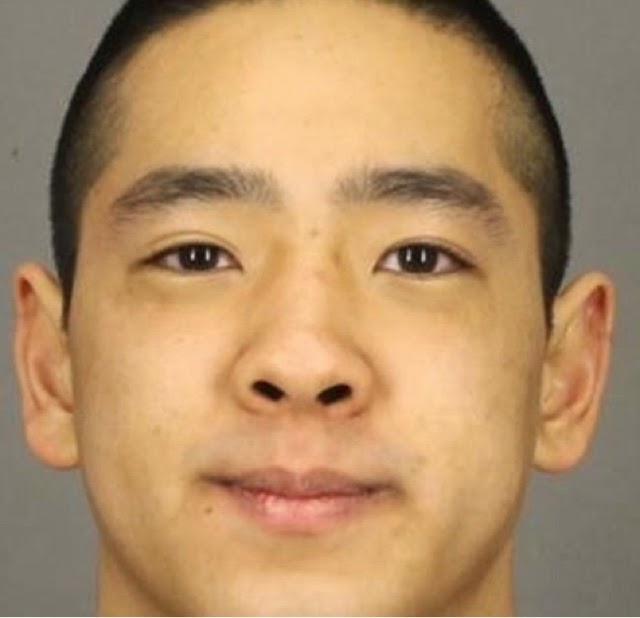 Charlie Tan
By Davy V.
UPDATED ON FEB. 14, 2014 8:46 P.M.
Long before I saw Charlie Tan smiling as he was led out of Pittsford, NY Town Court, in handcuffs and shackles after being arraigned for murdering his own father, I was disgusted.
But that sly smile did it for me.
It reaffirmed my disgust.
The Monroe County, NY Sheriff's Office says 19-year old Charlie Tan shot his father Jim Tan multiple times with a shotgun, including at least once in the face Monday night inside the family's Pittsford, NY home.
Jim Tan, 49, the CEO of Dynamax Imaging, died inside the home.
Immediately after the execution-style killing, Rochester's Corporate-America run, spin master mainstream news media, reported allegations of a history of domestic abuse in the home.
Those news reports quickly became an instant stamp of approval, and justification of a son murdering his father in cold blood.
Amd of course, with an overwhelming amount of people who are easily influenced by mainstream news media and believe anything they are told to believe, it didn't take long for those same folks to start donating money to a killer.
Within a couple of hours, there was an outpouring of support for Charlie Tan, including an online fundraiser which has raised more than $47,000 for Tan's defense lawyer, James Nobles.
Even New York State Assemblyman Bill Nojay, whose children went to school with Tan, publicly expressed his support for a killer.
A killer who executed his own father.
I know that domestic violence is a very real issue.
But it's not, and should not be an excuse for a 19-year old to murder his own father.
Perhaps there was a history of domestic abuse.
I don't know.
But what I do know is that Charlie Tan shot his father multiple times.
He executed him.
And Charlie Tan's smile as he left court says a lot.
So does the smirk on his face in his mugshot photo, taken shortly after killing his father.
Look closely at Charlie Tan's mugshot booking photo above.
Look at the smile.
Look at the look in his eyes.
You know what I think?
That's the look of a killer.
There's something very disturbing about that photo.
Like Charlie Tan is beaming with joy.
Perhaps Yaneek Brown of Rochester, summed it up best in a comment she left me regarding this piece.
"Sick child, an abused person doesn't smile the way he did."
My point exactly.
Charlie Tan is no hero.
He's a murderer.
UPDATE
I was the first, and so far, the only one to call this for what it is... BULLSHIT!
Ok, let's get you caught up a bit.
A lot has developed since that 911 call came in and Monroe County, NY Sheriff's deputies responded to Tan's Coach Side Lane home where they found 49-year old Jim Tan, dead on the floor of his Pittsford, NY home, shot by his own son Charlie Tan, who blasted his father with a shotgun, several times, including in his face.
First of all, Jim Tan may have been dead inside his home for as long as a day before that 911 call was made.
This shows a coverup, on behalf of Charlie Tan and possibly  other family members such as his mother.
Then, it turns out the shotgun that Charlie Tan used to execute his father,was purchased just days before the execution, at a Cortland, NY WalMart.
In fact, it turns out Charlie Tan tried purchasing the shotgun himself, but after being told that the process would take some time, Charlie Tan had someone buy the shotgun for him.
This shows that this wasn't selfie defense.
This was a planned, premeditated execution.
Which is why it's disgusting that despite all this, New York State Supreme Court Justice James J. Piampiano set bail for Charlie Tan, Thursday morning after Tan pleaded not guilty at his arraignment.
But not just bail.
Only $50,000 bail!
Thursday evening bail was posted for Tan and he was released.
And just like that, a cold blooded murderer, who executed his own father,, shooting him several times with a shotgun, as much as a day before that 911 call was made, a cold blooded murderer who tried to purchase a shotgun days earlier, and then had someone buy it for him, is free on the streets.
One thing is for sure.
If Charlie Tan was black or Latino, he would have NEVER been granted bail.
Follow me on twitter
https://twitter.com/davyvara
Posted by Davy V. at 3:46 PM