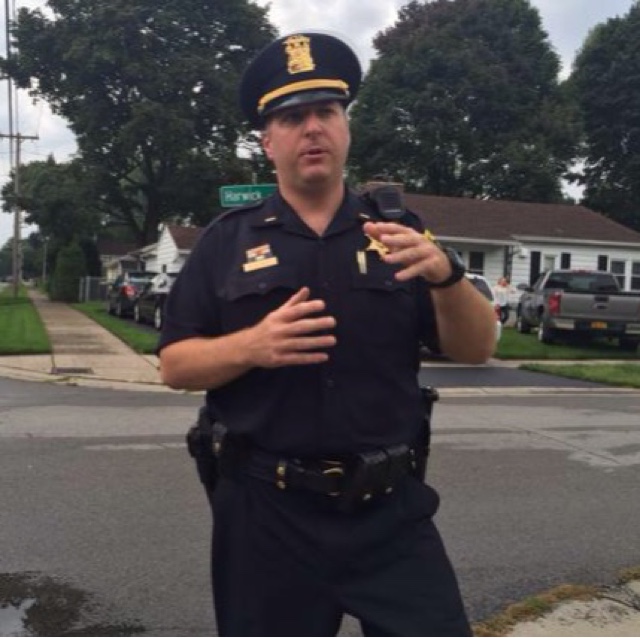 Monroe County, NY Sheriff's Deputy Orders Rochester's Mainstream News Media to Leave.
Photo: Twitter
By Davy V.
When it comes to the first amendment protected right to record, the powers that be in Rochester, NY continue to show that they will keep doing whatever they can to show their blatant disregard for it.
And for the U.S. Constitution in general.
In 2011 the the City of Rochester, NY and the Rochester, NY Police Department made international headlines when RPD officer Mario Masic violated Emily Good's constitutional rights after he arrested Good for video recording him and his fellow RPD officers conducting a racially profiled traffic stop of an African-American motorist.
The charges against Good were later dismissed, but the incident put the City of Rochester, NY, and the Rochester Police Department under an international spotlight, as the latest law enforcement agency to violate a citizen's constitutionally protected first amendment right to record.
With the video of Good's arrest being viewed throughout the world, Rochester, NY Police department Commander Sam Farina, upset about the video, decided to target a group of Emily Good supporters (myself included), after we had gathered at a support meeting for her.
Rochester Police Commander Sam Farina ordered several of his goons to do whatever they had to in order to disrupt our meeting.
What happened next can be seen in the video below which I recorded. (SEE LINK BELOW)
In a classic show of intimidation and retaliation tactics, and using plastic pink rulers, Rochester, NY cops measured the distances that our vehicles were parked from the curb, in front of where our meeting was being held, and then began issuing tickets to anyone parked more than a centimeter over the 12-inch limit.
A few months after that video went viral, once again putting the City of Rochester and the Rochester Police Department back in the spotlight, Rochester Police Chief James Sheppard and Mayor Thomas Richards announced that an internal investigation had determined that their officers had intentionally "targeted" Emily Good and her supporters at that meeting, and that as a result, there had been a change of command in the Rochester Police West Division.
Chief Sheppard was referring to Commander Sam Farina.
Farina, whose girlfriend had obtained an order of protection against him after he threatened her, resigned from the Rochester Police Department, and after laying low for a few years, was recently hired as Fairport, NY Police Chief.
Then there was Rochester, NY Police officer Jeffery Noble who I exposed after he threatened to arrest a woman for video recording him and several other RPD officers after neighborhood residents called police on a group of youths threatening neighbors who were attending a get together.
And just this past April, I exposed a Rochester, NY Police officer who intimidated a young woman after she began video recording that officer, and his colleagues harassing a group of black youths.
As you can see in the video below, the officer drives over to the young woman, pulls his cruiser right up to her, then activates a loud decbel alarm in a retaliatory attempt to get the young woman to stop video recording, thus violating her first amendment right to record.
Thankfully, the young woman was smart and held her ground, excercsing her first amendment.
And there's been other incidents of law enforcement officers abusing their authority, by harassing, threatening, and intimidating citizens who excercise their constitutionally protected right to record.
But with all these incidents, there's one common denominator.
The victims of the police abuse, intimidation, and in some cases arrest, for video recording police officers, are all private citizens.
But in the past few years that's been changing.
Yes, mainstream news media reporters, and their camera crews are slowly coming to realize a very bitter truth.
And that's that the law enforcement officers, the same folks they've enjoyed a very close relationship with over the years, a relationship which I refer to as the "Don't bite the hand that feeds you", since mainstream news media depends on police agencies feeding them scraps of info., and well, keeping them "in the loop" when it comes to major crime cases, are now themselves becoming a target of law enforcement.
Take, for example, an incident which took place Saturday afternoon in Irondequoit, NY, a suburb of Rochester.
Several Rochester news media reporters and photographers were covering a possible home invasion/burglary/standoff when Irondequoit, NY Police officers, and Monroe County, NY Sheriff's deputies told them to leave.
It didn't take long for Will Morgan, a photographer with Rochester's ABC affiliate WHAM13, to sound off on Twitter.
And rightfully so.
"More worried about media than the call!", Morgan tweeted. 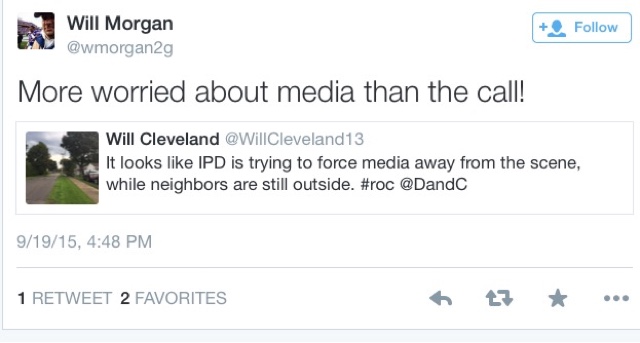 In just a few minutes, Morgan had Twitter lit up.
"Transparency."
"Why are they scared of us?" 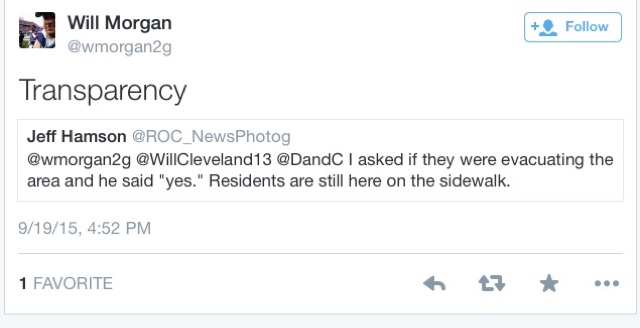 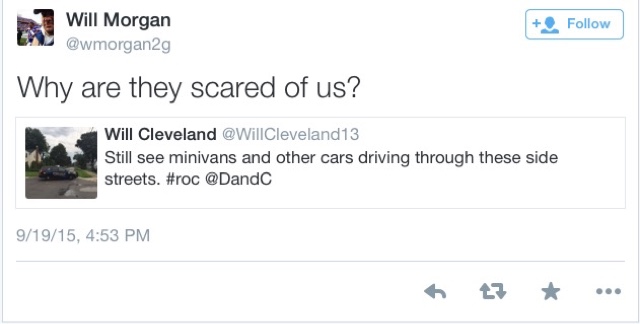 Now I have to say something here.
As many of you know, I'm no fan of mainstream news media, and the way that they help protect law enforcement, by spinning incidents of abuse, misconduct, and in some cases, cold blooded executions of unarmed innocent people.
But I have have to, this one time, give credit where where credit is due.
Like we Cubans say, Will Morgan SI QUE TIENE COJONES!
For all my non-Spanish speaking readers that means Will Morgan HAS COJONES!
Much respect for not being afraid to stand up to law enforcement.
And his next tweet explained why he isn't afraid of overzealous cops.
"IPD has threatened to arrest me at a standoff in theast. But couldn't figure out what to charge me with." 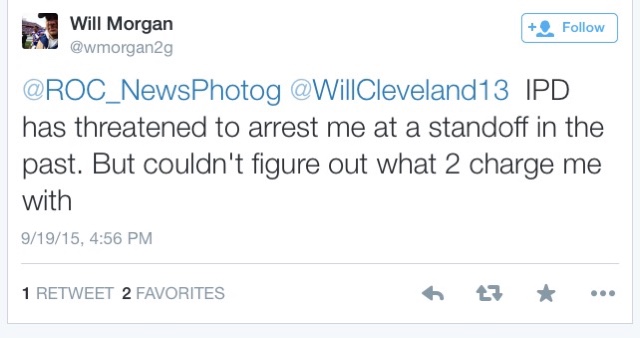 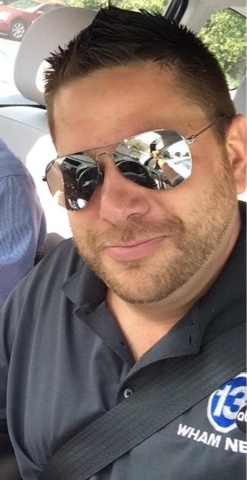 Will Morgan
Photo: Twitter
Even Will Cleveland, of Rochester's Democrat and Chronicle newspaper tweeted a photo of a Monroe County, NY Sheriff duty ordering media to leave.
"It looks like IPD is trying to force media away from the scene, while neighbors are still outside." 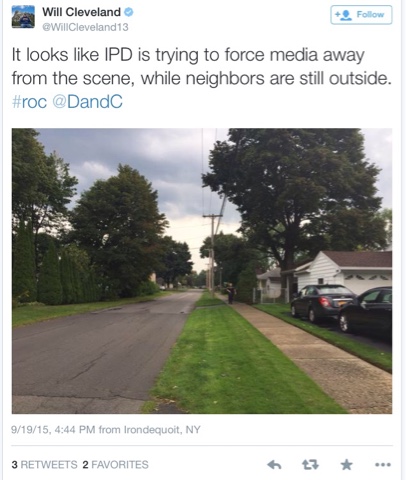 "Another MCSO deputy requesting that we leave. IPD doesn't want us here." 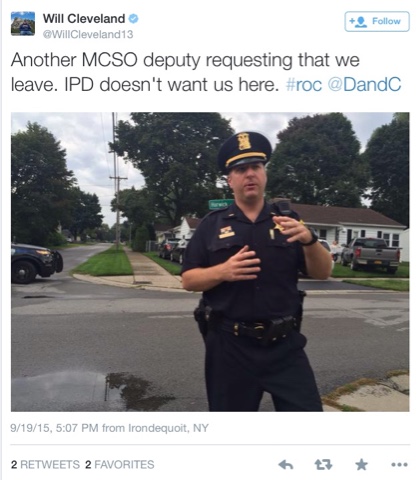 But Morgan and Cleveland weren't alone.
Rachel Barnhart, a reporter at Rochester's lowest rated news channel, the CBS affiliate, News 8 also took to Twitter.
"Media can go where public can. That isn't right", Barnhart tweeted.
"Ridiculous. We are no different than Joe Public. If he can walk around, so can we." 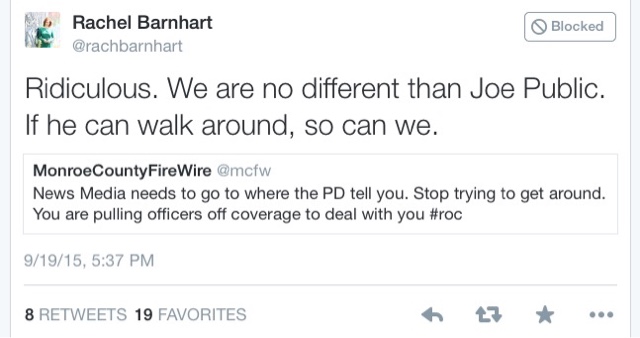 Barnhart was referring to police allowing the public, including neighbors to stand right up against the yellow take which police had set up to cordone off a perimeter.
Which is interesting, because it soon became clear that police was targeting, and slinging out news media.
Someone then tweeted Will Cleveland, and they weren't pulling any punches either; "we don't get even simple crime reports from IPD everything is a secret with IPD.", tweeted Janet Watson

Even Monroe County Fire Wire, who uses Twitter to tweet 911 calls for services in Monroe County, added fuel to the fire, in a very disturbing Gestapo-like tweet;
"News media needs to go where the IPD tell you. Stop trying to get around. You are pulling officers off coverage to deal with you."

Wow.
Yes, obey government officials!
Do as they say!
I wonder if Rochester's news media also had to show their papers? 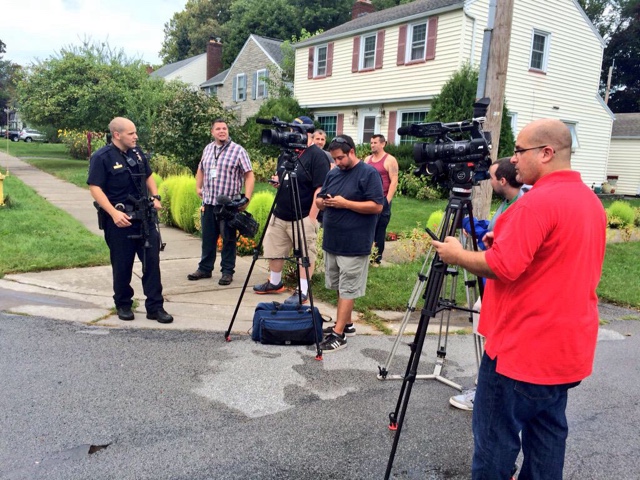 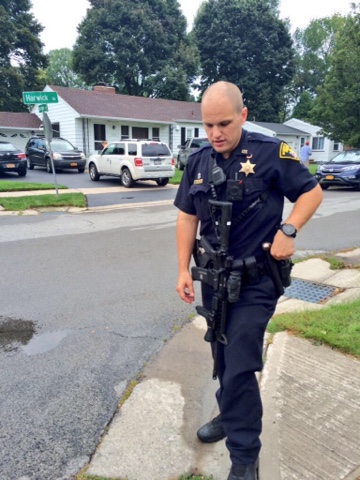 Monroe County, NY Sheriff's Deputy.
Photo: Twitter
One thing which may explain why the Irondequoit, NY Police Department seems to have it out for Rochester's mainstream news media, may be my March 18, 2015 expose of Irondequoit, NY Police detective Jim Frascati.
After I exposed Frascati on my blog for racist posts he made, including one where he targetted First Lady Michelle Obama, with a photo of African women in tribal dress, with the caption, "Michelle Obama's class reunion.", Rochester's mainstream news media outlets took my story which I broke, and did their own reporting, albeit with a soft, kids glove approach, but nevertheless they ran several news stories.
Shortly after I exposed Irondequoit, NY Police Detective Jim Frascati, Irondequoit Town Supervisor Adam Bello and the Irondequoit Tpwn board voted to terminate the veteran cop.
However, a slick Frascati later announced his retirement.
Obviously retiring looks better than being fired.
Only one station, Rochester's NBC affiliate, News10 NBC, and one reporter, Berkeley Brean, ran pretty good pieces on their newscasts which included an interview they did with me.
And let's just say that Irondequoit, NY Police Chief Richard Tantalo was furious.
And that's what I think may have happened.
The Irondequoit, NY Police Department, with the assistance of the Monroe County, NY Sheriff's Department flexing their muscle on Rochester's news media as a little payback for running my expose about one of their own.
So there you have it.
Once again, law enforcement in Rochester, NY, also known as "The World's Image Center", "The Birthplace of Photography", the home of Kodak (or what's left of it), once again infringing on the first amendment protected right to record. 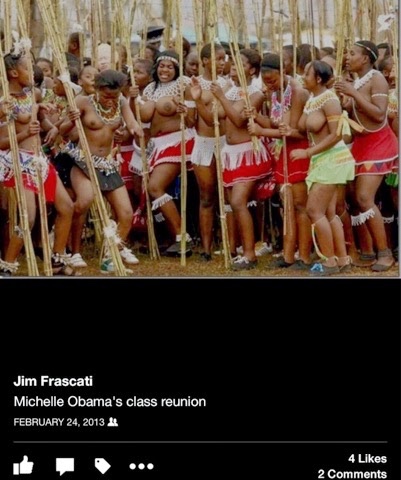 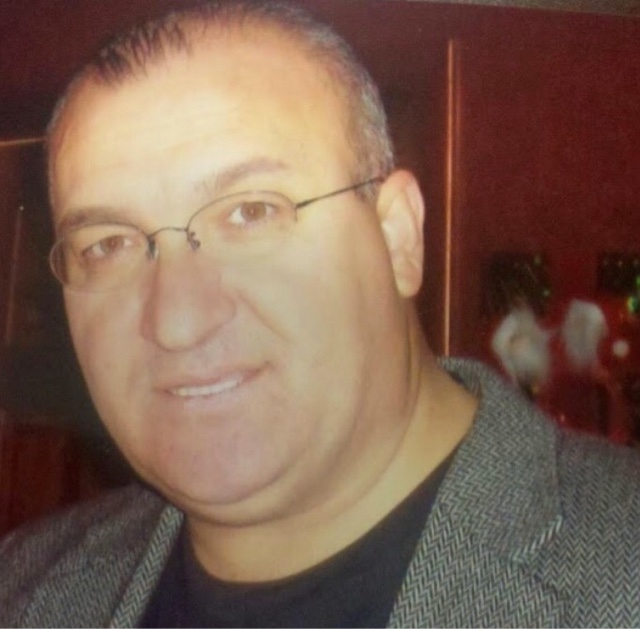