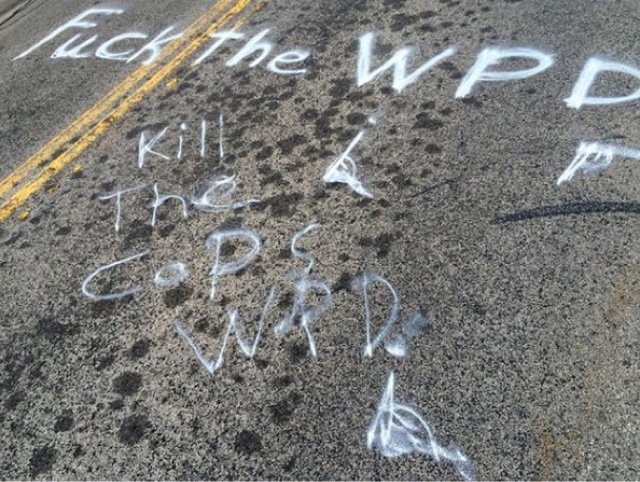 Spray painted death threats target Webster, NY Police
By Davy V.
The Webster, New York Police Department has become the latest police force to be targeted with death threats.
The threats, which included messages such as the ones seen in the photo above, reading; "FUCK THE W.P.D.", and "Kill The Cops W.P.D." were spray painted on several streets in the Town of Webster, NY, a suburb of Rochester, sometime late Friday night or early Saturday morning.
Not surpringly, Rochester's mainstream news media was quick to blame the death threats to Webster, NY Police officers on the popular N.W.A. biopic film "Straight Outta Compton", and their hit song "Fuck Tha Police."
I guess it's easier to have someone to point the finger at, and blame the messenger, than it is to address the real problem.
Let me be clear, in no way do I condone violence against police officers.
However, I'm willing to bet that whoever is behind these threats to Webster, NY Police officers are more than likely suburban teens.
And I feel it's important to realize that the ill will that many police officers have put out throughout the country with their complete disregard for citizens rights, profiling, abusing, and in many cases killing innocent, unarmed minorities, has no doubt brought about a very dangerous atmosphere where police officers themselves are now being targeted.
The death threats to the Webster, NY cops come just days after several police officers have been killed access the country, and just a day after the one year anniversary of the death of Rochester, NY Police officer Daryl Pierson, who was shot and killed on September 3, 2014 while chasing a parolee.
Webster, NY Police are said to be taking the death threats very seriously and are looking for those responsible.
PLEASE CLICK THE LINK BELOW TO SUPPORT MY FILM, A PROMISE TO MY DAD
www.gofundme.com/APromiseToMyDad
Follow me on twitter
https://twitter.com/davyvara
"Like" and Follow me on Facebook
https://www.facebook.com/davyvara
Posted by Davy V. at 11:57 AM