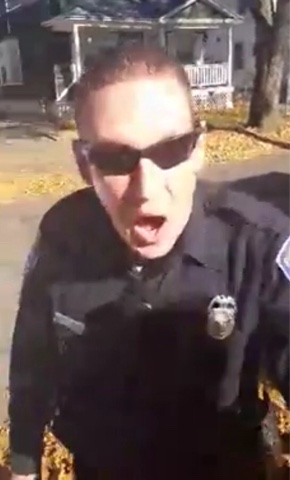 Rochester, NY Police cop yells at woman video recording
UPDATED BY DAVY V.
TUESDAY NOVEMBER 10, 2015 1:00 P.M.
According to Rochester, NY Police Captain Korey Brown, he supports his officers stopping a citizen, physically grabbing them, conducting an illegal search of their person without their consent, falsely arresting them, putting them in handcuffs, and unlawfully detaining them, taking away their freedom, until they realize they have the wrong person.
That's exactly what Rochester, NY Police officers did to Daryl Appleberry Monday afternoon as he and family members were enjoying a beautiful fall day on the porch of their Grafton St. home.
Appleberry's arrest was captured on several cell phone videos.
But it's what happened shortly before Rochester, NY Police officers released Appleberry from his false arrest, which once again shows how Rochester Police officers, primarily white officers, mistreat black citizens in the city where Frederick Douglass, known as the founding father of America's civil rights movement, is buried.
Throughout Daryl Appleberry's false arrest, his neighbor, Scean Gordon was also video recording with his cell phone.
And Rochester, NY Police officers did not like that.
So they falsely arrested Gordon as well, but not after several officers assaulted him, pepper spraying, tasering him, and slamming him on a driveway.
They then charged him with resting arrest, obstruction of governmental administration, and disorderly conduct.
RPD Captain Korey Brown commanded his officers.
"They used great restraint," Captain Brown told Rochester's mainstream news media, adding, "I'm surprised they didn't arrest him earlier."
Captain Brown also said that his officers arrested Gordon because he was loud and cursed at officers.
None of which are illegal. 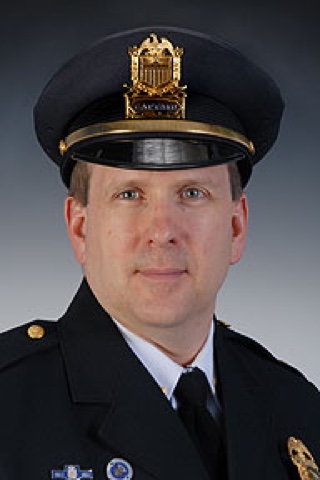 Rochester, NY Police Captain Korey Brown
SEE MY ORIGINAL PIECE BELOW
By Davy V.
Darryl Applegate has followed my work since he was 15 years old.
That's why when Rochester, NY cops unlawfully arrested the 30-year old Appleberry, kidnapping him, and putting him in the back of their police cruiser, even though they knew they had the wrong guy, he contacted me as soon as they set him free.
Appleberry told me he was on the porch of their Grafton Street home, on Rochester's east side, when Rochester Police drove down the street and slow down as they passed his home.
"They slowed down, turned around, and then came back," Appleberry told me.
"Then they jumped out of the police car and they grabbed me, they even searched my pockets."
Rochester, NY cops then placed Darryl Appleberry in the back of their police cruiser.
"They had the wrong guy, it wasn't me who they were looking for, I didn't do anything," Appleberry told me.
Well, after secrets, minutes of Appleberry being under false arrest, handcuffed in the back of an RPD cruiser, he was finally released.
No warrant.
Nothing.
Wrong person.
It's a kidnapping.
An abduction.
By armed thugs.
The only difference is that these cops are able to do this because their corrupt, illegal actions are done under the color of law.
Under the guise of a "law enforcement" officer.
So they get away with it.
Every single time.
But the story doesn't end there.
As disturbing it is to be on your porch, enjoying a beautiful fall day, and have two police officers grab you, illegally search your person, and then put metal handcuffs on you and put you in the back of a
police car, behind a cage, when you know you haven't done anything wrong, what happens next is perhaps even more disturbing.
The whole time that Appleberry was handcuffed and being placed in the police cruiser, there were several people video recording with their cell phones. (BOTH VIDEOS ARE LINKED BELOW)
One of these persons, was Scean Gordon, who lives across the street from Appleberry.
The video below. (PART 2) which was originally posted to Facebook by Appleberry as soon as he was set fee, captures yet another disturbing and violent example of Rochester, NY Police officers violating citizens' first amendment right to record.
Something which the Rochester, NY Police Department is notorious for doing.
After Rochester, NY cops place Appleberry in the cruiser and begin to pull off, the officer driving the cruiser abruptly stops the vehicle, gets out, and does a bee line straight to Scean Gordon, who is standing on private property, and tackle him. 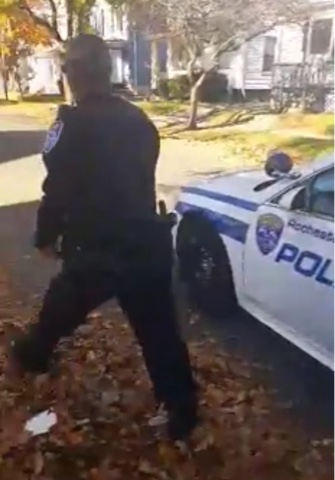 Rochester, NY coo charges at man who was video recording
"He wasn't dong anything wrong," Gordon's wife, who didn't want to be identified, out of fear of retaliation by the RPD, told me.
"He was simply video recording what was happening to his friend because the police had the wrong person."
"My husband suffers from post traumatic stress disorder from being beaten by police in New York City years ago, but he didn't do anything wrong."
Rochester Police officers tasered Gordon, and assaulted  him, even slamming him on the driveway of the home.
Gordon was charged with resisting arrest and "O.G.A", or obstruction of governmental administration.
Both bullshit charges which police use when they have to come up with something to try and justify their illegal, unconstitutional actions.
Gordon was taken to Rochester General Hospital for his injuries.
NOTE: AS YOU WATCH THE VIDEOS, PAY CLOSE ATTENTION TO THE UNPROFESSIONALISM ON BEHALF OF THE ROCHESTER, NY POLICE OFFICERS.
WHICH IS EXACTLY WHAT I'VE BEEN SHOWING FOR YEARS.
I will be updating this piece soon.
CLICK LINK BELOW TO PLAY PART 1 OF VIDEO
http://youtu.be/J5pxAfFOGlY
CLICK LINK BELOW TO PLAY PART 2 OF VIDEO
http://youtu.be/QDlh-ejs4DA
Rochester, NY Police kidnap Darryl Appleberry 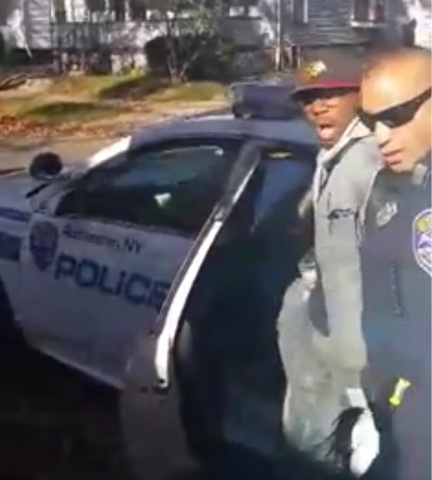 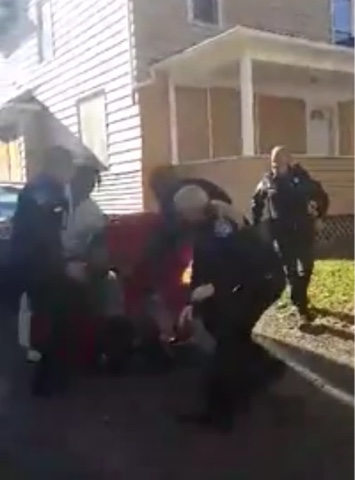 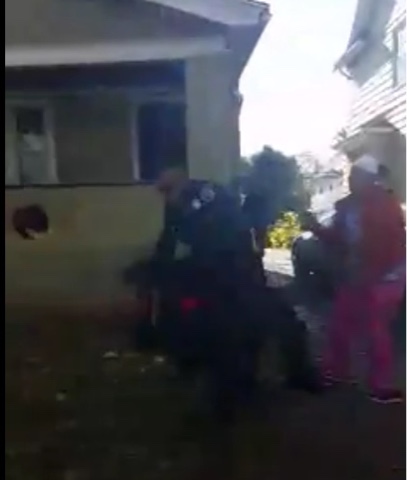 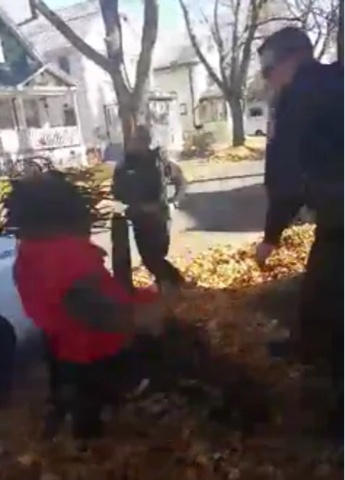 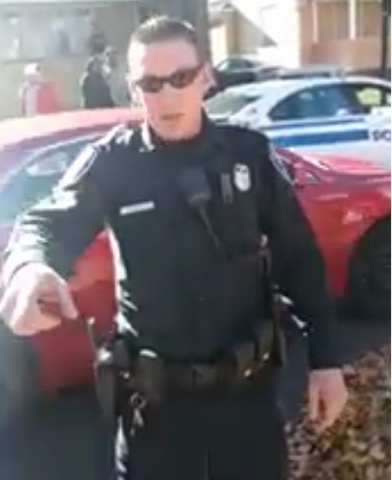 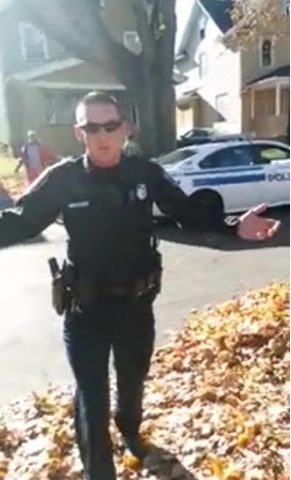