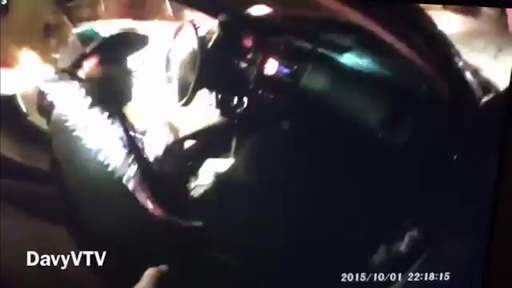 Rochester, NY Police officer Jason Lathrop Tasers Black Man
By Davy V.
A young black man is tased by a white Rochester, NY cop and the entire incident is captured on video.
The officer's bodycam video.
Turns out the Rochester, NY Police Department has been using body cams since at least 2015.
But how is that possible, when according to Rochester, NY Mayor Lovely Warren, and Rochester, NY Police Chief Michael Ciminelli, the RPD hasn't even begun using bodycams yet?
Or have they been wearing body cams all along and keeping it from taxpayers?
It's October 2015, and Jermel Board is driving his black Honda Civic on Rochester, NY's west side.
Next to him in the passenger seat, his cousin Paul Morgan.
Jermel decides to take a shortcut home by driving through a Rite-Aid pharmacy parking lot.
But unbeknownst to Jermel, Rochester, NY Police officer Jason Lathrop sees him cut through the parking lot and begins to follow him.
A few minutes later, RPD officer Lathrop pulls Jermel's Honda over on the corner of Victoria and Hertel Streets.
And that's when officer Jason Lathrop's bodycam video begins.
The video starts with officer Lathrop asking both Jermel and his cousin Paul for ID.
There's some conversation back and forth where officer Lathrop asks Jermel Board if his license is suspended, to which Board replies it is not.
Then the conversation turns towards the passenger, Paul Morgan.
Officer Lathrop asks Morgan for ID.
Morgan asks Lathrop why and explains that he lives nearby.
Officer Lathrop then asks Jermel Board to step out of the car, where is handcuffed and arrested for not having ID.
Then, as Rochester Police officer Jason Lathrop escorts Jermel Board to the back of his police cruiser, s second RPD officer can be heard talking to Paul Morgan who is still sitting in the passenger seat of the Honda Civic.
That officer, Jason Mueller.
The video then shows an agitated officer Lathrop quickly walking over to the passenger side of the vehicle, as he can be heard talking to himself, where he quickly repeats the word "alright", three times.
Officer Lathrop then escalates what up to now has been a calm traffic stop with both Jermel Board and his cousin Paul Morgan having been very respectful.
It's also important to note here that New York State is not a stop and ID state.
According to the New York Civil Liberties Union (NYCLU) website, "Police may stop and briefly detain you only if there is reasonable suspicion that you committed, are committing or are about to commit a crime. You should ask if you are under arrest or free to leave. In New York, you are not required to carry ID, and you don't have to show ID to a police officer."
Officer Jason Lathrop didn't have either of those.
There was no reasonable suspicion that either Jermel Board, or Paul Morgan committed, were committing, or were about to commit a crime.
But frankly as I watch the video, I'm not the least bit surprised at officer Jason Lathrop violating citizens' constitutional rights.
Sadly, it's something the Rochester, NY Police Department does on a daily basis.
At this point an irate Officer Lathrop becomes even more agitated and physically grabs Paul Morgan's right arm, and begins yelling at him to get out of the car.
Now, I've been doing this a very long time, and if there's one thing you can count on cops doing, is when there's video rolling, whether someone is recording, or whether it's officers themselves video recording with their bodycams, you can bet that cops will do and say certain things in an effort to justify any illegal and unconstitutional behavior on their part.
A classic one which cops love to say whenever video is rolling, is "Stop resisting!"
It's almost guaranteed that a cop will always throw in a few "Stop resisting!" statements in for good measure anytime a camera is rolling, and they're beating your ass, or, as officer Lathrop did in this case, anytime they're shocking someone with their tasers.
And that's exactly what RPD officer Jason Lathrop and Jason Mueller are heard saying as Lathrop tasers Paul Morgan, who is seen in the video falling to the street, writhing in pain. 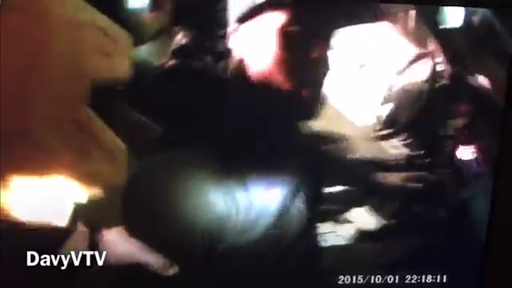 Taser pointed at Paul Morgan
Later in the video, officer Lathrop is heard threatening to tase Morgan again.
The video then goes on to show a hyped officer Lathrop searching the Honda Civic, desperately looking for drugs.
"Smells like weed really bad," officer Lathrop is heard saying.
"There's a little bit of a blunt, there's gotta be more than that though."
The whole time that officer Lathrop is searching the vehicle, which is several minutes, Paul Morgan is lying on the curb in pain.
In the end, Paul Morgan was charged with resisting arrest and possession charges, even though no actual drugs were ever found.
No real amount anyways.
Only residue of a blunt, if that.
As for Jermel Board, he wasn't charged with anything.
In fact, so much for his cutting through the parking lot.
He was never ticketed.
Which is interesting because not only was that the reason that Rochester Police officer Jason Lathrop gave Jermel Board for the initial stop, but Rochester Police edited that part of the video out. 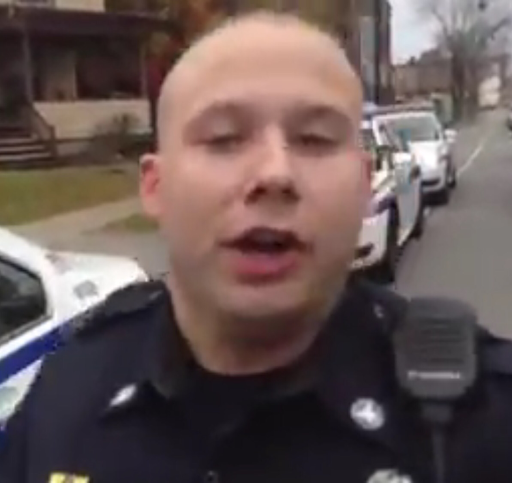 Rochester, NY Police officer Jason Lathrop
If the name Jason Lathrop sounds familiar to the regular readers of this blog, that's because I've featured Rochester Police officer Jason Lathrop before on my YouTube channel DavyVTV.
Last year I recorded officer Lathrop after he and other RPD officers questioned and tried to illegally search a black man's SUV as he was getting gas, simply because the man fit a description of someone Rochester Police claimed they were looking for.
I will be updating this piece.
CLICK LINK BELOW TO WATCH VIDEO
https://youtu.be/UbRhmOWdM3s
Follow me on twitter
https://twitter.com/davyvara
"Like" and Follow me on Facebook
https://www.facebook.com/davyvara
Posted by Davy V. at 5:37 PM