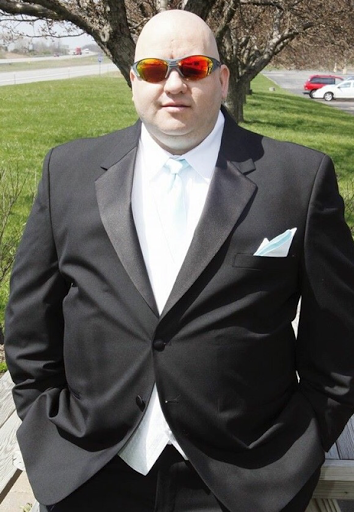 Paramedic David Stratton
By Davy V.
Here we go again.
Just a few weeks after I exposed several City of Rochester, NY 911 operators asleep at their desks, headsets still on, here's another disturbing story, this time  involving a Rochester, NY area first responder.
On March 29, 2014, Juliette Richard, a first year student at the University of Rochester, who was an EMT, died in her dorm of a heroin overdose.
Last week, Rochester, NY's Democrat and Chronicle newspaper ran a story about how the University of Rochester is implementing changes, as a result of Juliette's death.
Some of those changes include more resources, such as counseling which will be available to students. 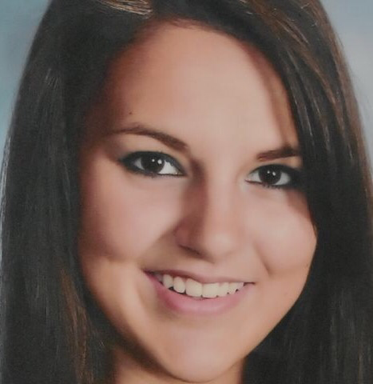 Juliette Richard Died of Heroin Overdose in 2014
On Tuesday I was contacted by someone who works in the EMS field, and follows my blog.
That person alerted me to some disturbing Facebook posts by a paramedic named David Stratton, who according to my source, works for Rural Metro Ambulance, Brockport, NY Ambulance, and the Brockport, NY Fire Department. 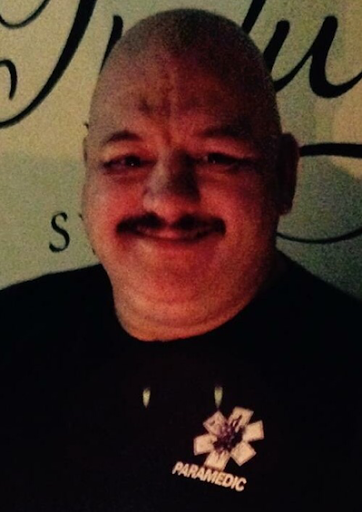 Paramedic David Stratton
In one particular comment, paramedic David Stratton writes that Juliette Richard deserved to die.
"I have no sympathy for someone that makes poor choices. You make the choice to use drugs, then you deserve the consequences that are involved with it, up to and including death!", Stratton's Facebook comment reads. 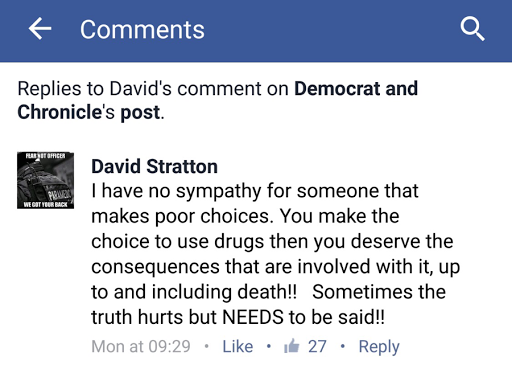 Paramedic David Stratton's Facebook Comment
As you can see in the screenshots below, several people on Facebook wasted no time in blasting the paramedic for his insensitive comment.
"You sound like a class A douchebag", posted one Facebook user.
"She was a college student-and people, like you, do stupid things when they're young. This young girl unfortunately died as a result. She doesn't deserve to be slandered after her death, when she isn't here to defend herself.", wrote another.
One man who replied to David Stratton's comment wrote:
"David so you lived a perfect life and never tried something that was bad?"
And a woman wrote the following comment:
"Oh that's f_cking great! And you are an EMT! Look out Brockport College Students, this guy will probably withhold the Narcan, or not put pressure on your wound because he's a judgemental POS!" 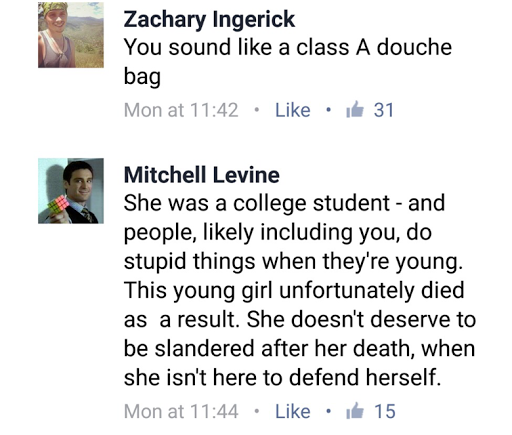 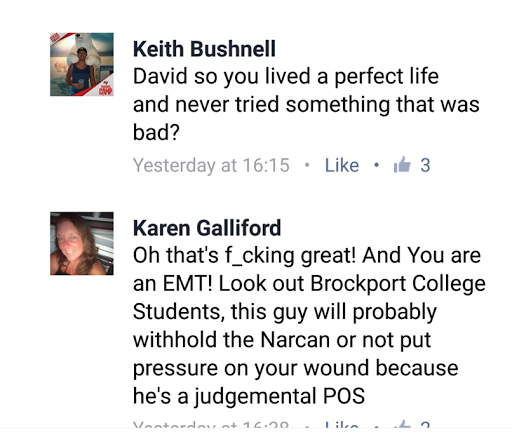 But perhaps the best comment was the one below, where a man named David Keller asks why the citizens of Brockport, NY aren't calling for David Stratton's firing.
"Why aren't the people of Brovkport calling for this Emt's dismissal. If that is his attitude toward people he is serving he has no business serving." 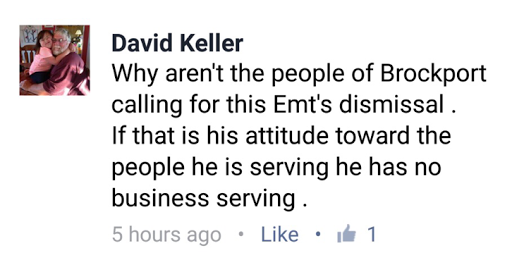 Personally, I find Stratton's comments insensitive and unprofessional.
Especially coming from a first responder, whose job is first and foremost to assist people when every second counts, and to do everything within their power and professional medical training, to save lives, and to do so free of any prejudices or biases.
In fact, the Code of Ethics for EMS personnel reads in part:
"To provide services based on human needs and respect for human dignity... To use social media in a responsible and professional manner that does not discredit, dishonor, or embarrass an EMS organization, co-workers, other healthcare practitioners, patients, individuals, or the community at large."
It's pretty clear by David Stratton's disgusting comments that he could care less about the code of ethics which his own profession subscribes to.
It's also quite clear that David Stratton should not be employed in a position in which he is entrusted with the care of human lives.
And if David Stratton's disgusting comments about a young woman who died of a drug overdose, weren't disturbing enough, consider this.
In an October 18, 2015 Facebook post, David Stratton called for President Obama's assassination, in essence saying President Obama should be killed like President Kennedy.
In a post David Stratton shared on his Facebook page of an animated President Obama video, he writes:
"That piece of shit in the current White House doesn't understand this. The best outcome for this country would be to JFK his ass." 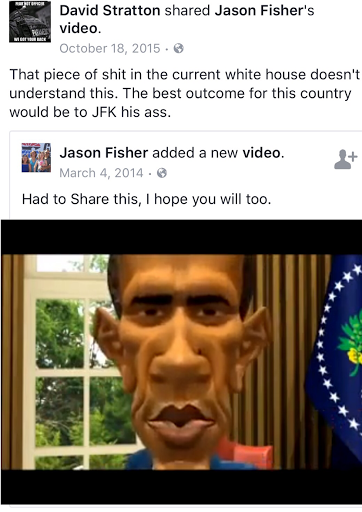 Paramedic David Stratton Referring to President Obama: "The best outcome for this country would be to JFK his ass."
Sounds to me like not only should David Stratton be fired from his employers, but the U.S. Secret Service should also look into this disturbed individual.
I will be updating this story.
Follow me on twitter
https://twitter.com/davyvara
"Like" and Follow me on Facebook
https://www.facebook.com/davyvara
Posted by Davy V. at 7:59 PM