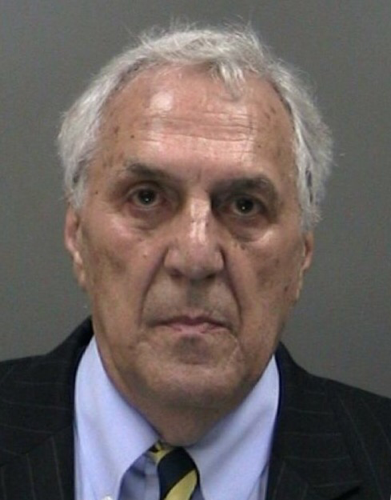 Attorney John Parrinello's Mugshot after Being Arrested for Soliciting a Prostitute
By DAVY V.
Rochester, NY attorney John Parrinello and his son Matt Parrinello are known for representing some of the worst lowlife scum.
In 2012, Matthew Parrinello unsuccessfully defended Dawn Nguyen, the Greece, NY woman who purchased assault rifles for William Spengler, an ex-con and parolee who served time for bludgeoning his grandmother to death with a hammer, then throwing her in the basement of her Webster, NY home. 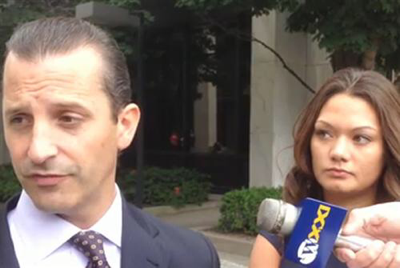 Matt Parrinello with Dawn Nguyen
On Christmas Eve 2012, Spengler set fire to his home, then ran across the street, where he laid down in a bluff on the shore of Lake Ontario, and waited for firefighters from the West Webster, NY Fire Department to arrive.
Armed with a 38. Caliber handgun, a 12-gauge shotgun, and a Bushmaster semi-automatic rifle, Spengler then opened fire and ambushed the first responders, killing 43-year old Michael Chiapperini, a Webster, NY Police Sgt, and firefighter, as well as 19-year old Tomasz Kaczowka, who worked as a firefighter and 911 dispatcher.
Two more firefighters, Joseph Hoffstetter, and Theodore Scardino were both critically injured but survived.
Dawn Nguyen was later convicted and is currently serving a concurrent state and federal prison sentence.
John Parrinello once defended members of the Rochester, NY Police Department's HIT Squad, a street level team (gang) of undercover cops (thugs) known for beating, terrorizing, and torturing suspected
drug dealers, in some cases using pliers on suspects' teeth and genitals, and also using electrical wires to shock suspects.
Yep.
John Parrinello has defended the worst scum.
So it's no surprise that John Parrinello's latest payday is none other than Jocelyn Evans, the Blue Cross Blue Shield Vice President of Enrollment who left her two dogs to die without water or shade in 90-plus degree heat. 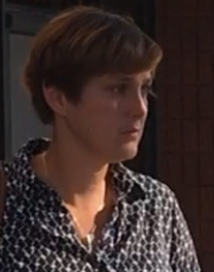 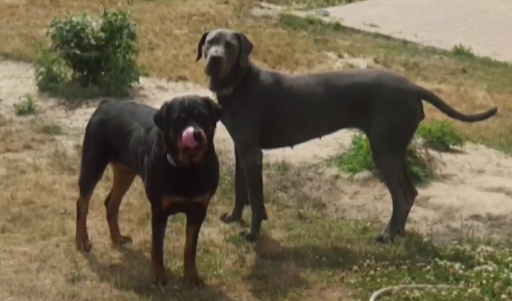 (Left to Right) Roxy and Blue, left to die in 90-plus degree heat
It's no surprise really, that John Parrinello would defend scum, considering that just last year, Parrinello was arrested by Gates, NY Police for soliciting a prostitute.
In 2010, John Parrinello was arrested and charged with trespass for refusing to leave a basketball game after he was ejected for yelling offensive and vulgar language in front of families with young children.
John Parrinello, who is known for his "Poppycock" outbursts in court, also has a history of yelling at judges, throwing chairs and papers during trials, and becoming irate, at times even storming out of trials, slamming courtroom doors.
John Parrinello and his son have also defended a career criminal and ex-con named Theodore "Teddy" Loria, who threatened to kidnap, murder, and decapitate my 5-year old daughter.
Despite the threat having been captured on a store's surveillance video, neither the Rochester, NY Police Department, nor the Monroe County, NY District Attorney's office charged Loria.
Simply put, attorney John Parrinello is a vulgar old man who for years, legal professionals have said is going senile.
And he and his son get a kick out of representing and defending the worst of society, including individuals who threaten to kill innocent children.
Therefore I can't really say I was surprised that John Parrinello tried to violate my first amendment right by trying to have me removed from outside of Henrietta, NY Town Court, where I, along with some members of Rochester's mainstream news media were waiting for his client Jocelyn Evans to exit from her arraignment. 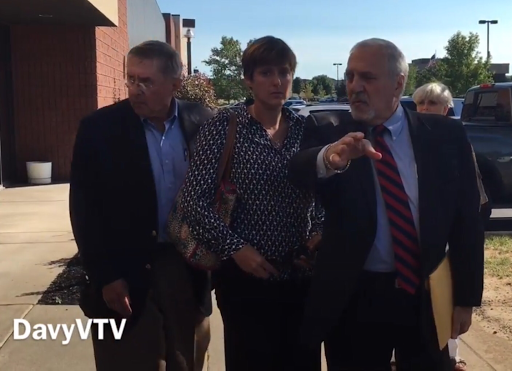 Attorney John Parrinello asks Court Security Guard to Remove Me from Outside Henrietta, NY Town Court
Watch my video below and see how John Parrinello asks a court security officer to "remove" me, after I asked his client for a comment.
Also pay close attention to members of Rochester's news media, including Democrat and Chronicle newspaper reporter Will Cleveland (he's the big guy with glasses) and some news cameraman for Rochester's ABC affiliate, 13WHAM/FOX News, who looks like Quagmire from Family Guy, who loses it and interrupts me.
Now mainstream news media strongly disliking me can best be explained like this.
Never have they seen someone more hungry than them.
More passionate than them.
More motivated than them.
Someone who isn't afraid to ask the questions they should be asking.
Someone with more cojones than them.
The Davy V. Blog started out with a small piece I wrote on what to do when stopped by police.
And it's grown into a blog with which is followed by people in places throughout the world.
Including some places I'll probably never visit, let alone learn to pronounce.
I've broken some of the biggest stories on this blog.
There's a saying, "Real recognizes real."
And I strongly believe that's why this blog has had the success it has.
And why it continues to remain an important and relevant news source.
It's also why it has the following it does, and why it continues to grow.
But these mainstream news media reporters don't understand that.
They don't understand how I get the tips I do.
They don't understand why or how a citizen journalist with no college or professional training like they have, and without the student loan debts that they have, can do what I do.
Whether it's inside sources such as current or former law enforcement officials contacting me about a racist veteran cop posting racist comments about blacks and Latinos online.
Or whether it's a source sending me photos of 911 operators asleep on the job.
Or whether it's someone alerting me to some young punk who just got off by posting a video of him hitting an elderly woman in the face with a snowball in the latest "Smack Cam" fad video.
They just don't understand how I do it.
Mainstream news media just doesn't get it.
And they never will.
Some things you just can't learn in school.
But they don't get that.
And they get frustrated.
And they feel uncomfortable when I'm around.
So they do the only thing they know how to do.
Hate.
But that's ok.
The best is yet to come.
Stay tuned.
CLICK LINK BELOW TO WATCH VIDEO
https://youtu.be/3pWzPAkT-oI
Follow me on twitter
https://twitter.com/davyvara
"Like" and Follow me on Facebook
https://www.facebook.com/davyvara
Posted by Davy V. at 4:52 PM