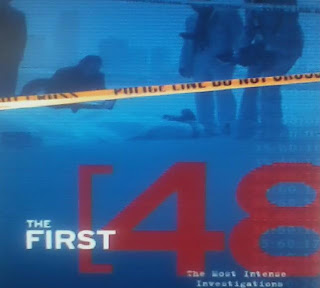 News of A&E's hit TV show "First 48" filming in my hometown of Rochester, NY spread like wildfire on local television and radio.

In fact, while switching through stations in my car the other day, a local radio dj boasted: "The reality show The First 48 is in Rochester filming murders, that is so cool!"

Murders are not "cool."

Nothing about a person losing their life in a violent manner, is "cool."

Nothing about the pain the deceased person's family is left with, is "cool."

I'd rarely miss an episode.

Now, I'm having mixed feelings about the show which follows police officers and homicide detectives on homicide cases from the time 911 receives a call, through the first 48 hours of the investigation.

Maybe it's because they're in my city.

Maybe it's because now I'm seeing the spin, sensationalism and exploitation.

I guess I just never realized how the show truly doesn't care about the victims or their families.

I never looked at like this, but the show's producers are literally waiting for people to be killed.

And I find it disturbing, that right now, in my my hometown, the show's producers are eagerly awaiting another murder.

It can be said they are in the 'murder for ratings' business.

Furthermore it can be said, that in a way the TV show is exploiting innocent families' tragedies and pain.

And I have a problem with that.

As it turns out, the hit show is not without controversy.

In 2008, the Memphis, Tennessee Police department suspended filming with the "The First 48" for reasons which they refused to comment on.

Even the producers of the show weren't informed why they were asked to stop filming.

The show's executive producer, Laura Fleury said "All the feedback about the show has been really positive."

However, Memphis City Councilwoman Wanda Halbert didn't pull any punches, "The show has been on for years. They could have at least put money in a victim's fund," Halbert said.

Despite the show, which thrives on murders of inner city minorities, mostly African-Americans, and Latinos, being the highest rated non-fiction justice series on American television, and pulling in millions of dollars in advertisement revenue, they contribute nothing to the victims families which they feature on each and every single episode.

Which is why I say, they don't care about the victims or the families.

Only ratings and revenues.

And when the next homicide call will come in.

Ingalls is no stranger to Rochester.

In 2008 he was part of a team which filmed in Rochester for "Crime 360", another show covering homicides in cities throughout the U.S.

Of course, Ingalls and Rochester, NY Police homicide investigator Gary Galetta, who along with other RPD investigators, will be featured on the episodes, would disagree with me.

“Seeing the work that these investigators do. Seeing the hours they put in. Seeing how dedicated they are to their jobs is important to bring to people,” said Ingalls.

Galetta, who has also had more than his 15 seconds of fame, when he appeared on the Crime 360 Rochester episodes, added “A lot of people particularly the families of victims don't get to see the effort, the day to day grind that goes into a murder investigation.”

As far as I'm concerned Ignalls and Galetta are biased.

One is the show's producer, the other is one of the "stars."

I don't expect either of them to say anything different.

I'm sorry, but to see people get excited about a show that covers violent deaths, and especially to hear a radio host sounding like some giddy high school girl with a Justin Bieber crush, basically say that murders are "cool", then to see it's all about the ratings, is disgusting.

Another controversial point in the show came on May 16, 2010, when a 7 year old Detroit, Michigan girl named Aiyana Jones was shot and killed during a SWAT raid that was filmed by The First 48 cameras.

Detroit SWAT raided a duplex while searching for a homicide suspect.

Allison Jones, an A&E Television Network camera operator who was filming that night, was charged with perjury and obstructing justice after lying under oath.

The First 48 has been criticized for putting witnesses in danger by revealing their faces and their voices to a national television audience and for not being sensitive to possibilities of retaliation against those witnesses.

Some have also called the show racist saying the show intentionally focuses on covering cities such as Detroit, Memphis, Louisville, Birmingham, Kansas City, Dallas, Cincinnati, Philadelphia, Atlanta, and other surrounding cities in the southernmost region of the United States.

Areas with a high population of African-Americans.

A&E's The First 48 travels to cities throughout the U.S., and profits off mostly black on black crime, exploiting deaths and innocent families at their most vulnerable point.

The show makes millions selling advertisement spots, then without even contributing to any sort of victims fund, or anti-violence programs in the very same communities they exploited, they leave town, and do it all over again in another city.