How many cups can a Rochester, NY Police officer stack on his head?

I promise you it's not a trick question.

In fact, as you can see on the photo to the right, that's exactly what a Rochester, NY Police officer did at the Roc City Rib Fest, at Charlotte beach on Saturday afternoon.

Rochester, NY Police Chief James Sheppard told Rochester's corporate-run, mainstream news media outlets that after several fights which broke out blocks away from Rochester's Lilac Festival last week, the RPD would be out in force at the Roc City Ribfest.

What Sheppard didn't mention was that in addition to 'protecting and serving',, Rochester Police officers would also be providing entertainment at the Roc Ribfest, like the officer in the photo, seen balancing a stack of cups on his head. 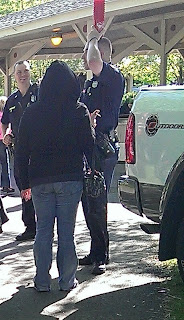 This is how the person who sent me the photo described the RPD officer's 'Cup balancing act!"

"I couldnt hear the whole convo, from what I observed, the group of young adults who were all drinking (nothing wrong with that) approached the officers saying 'ooh, here's cops, here's cops, ask them!' and they had a stack of red plastic beer cups (what the cop is attempting to balance on his head). The other officer attempted it first, but I didn't catch that one, I was busy pulling my phone out to photograph it as soon as I saw what he was doing and the officers, flirting and giggling, stated 'ok, but no pictures girls.' Glad to see they beefed up security and police at these events, they are obviously hard at work."

Yep, that pretty much says it all.

Nice to know that Chief Sheppard has things under control, and that if a gang of gun toting, knife wielding 'gang members' decide to crash the Roc City Rib Fest, Rochester Police officers would save the day, and protect citizens.

As soon as they take the beer cups off their heads that is.

And there you have it Rochester, NY.