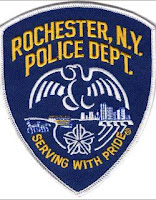 The trigger-happy Rochester, NY Police department has shot and killed another dog.

This latest shooting marks the second time in less than two months that a Rochester Police officer has discharged their firearm near innocent bystanders, on a residential street.

According to Rochester Police, a woman was bitten by a dog, on DeJonge Street, on Rochester's northeast side.

The woman is said to have suffered a 5-inch laceration to her torso.

Rochester Police say that when an ambulance arrived, they could not reach the woman because the dog was still lose and behaving in a threatening manner.

They refused to elaborate any further.

RPD says that's when they were called.

A Rochester Police officer who arrived on the scene, immediately shot and killed the dog.

That incident was the second time in just the past 6 months, that Rochester Police officer Chris Burgstrom has shot and killed family pet.

On January 8, 2013, Burgstrom shot and killed "Codi", a lost family dog, as his owner was looking for him.

RPD officer Burgstrom, responding to a call for a loose dog near Rochester's Charlotte Park, spotted Codi, struck the scared dog with his cruiser, then chased him down to a pier, where he removed his department-issued Remington 870 shotgun from his cruiser, and shot Codi in the back of the head, executing the innocent family pet.

If you believe in my work, exposing police misconduct and corruption, and covering issues mainstream, corporate-America run news media chooses to ignore,  please support my work by clicking on the "Donate" button at the top right of my blog and making a donation.