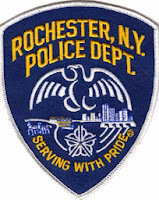 According to Rochester, NY Police Lieutenant Francis DPrimo, he has no problem with one of his Sergeants, David Joseph, running personal errands, on duty, on taxpayer time.

In fact, Lieutenant DiPrimo told Sgt. Joseph he could.

Saturday morning, Rochester, NY Police Sgt. David Joseph, who was on-duty, and in full uniform, got a ride from an unidentified RPD officer, who drove Joseph from the Rochester Police department's west division, located at 1099 Jay Street, in a marked RPD cruiser, to an auto repair shop almost 6 miles away, on the other side of the city, where Joseph picked up his personal vehicle, which had been serviced at the garage.

Rochester, NY Police Sergeant then jumped in his Nissan Xterra, sped down East Avenue, sped down Culver Road, and jumped on interstate 490 West.

Sgt. Joseph then made several illegal land changes by failing to signal, and accelerated to high speeds which well exceeded the listed 55 miles per hour limit, as well as a well known 40 miles per hour speed zone, on his way back to the Rochester Police west division headquarters.

And once again, it was an alert citizen who saw Rochester Police Sgt. David Joseph and decided to document it.

The woman, who asked that I not publish her name for fear of retaliation by the Rochester Police department spoke with me a phone interview.

"I tried to keep up with him when he got on the expressway, but he floored it," said the concerned taxpayer who took the photos n the right.

"I don't think it's right that these officers are wasting our tax dollars on things like this, and then to speed on the expressway and put innocent lives at risk makes no sense at all," she said.

Rochester, NY Police Sgt. David Joseph's reckless driving putting innocent, law-abiding motorists' lives at risk, motorists who unlike Sgt. Joseph, were obeying the posted speed signs, is not the first time that a Rochester Police officer with the last name of Joseph, showed a blatant disregard for human life by driving recklessly.

In 2008 Sgt. David Joseph's brother, former Rochester, NY Police officer and Greece Police Sgt. Nick Joseph was off duty, drinking and doing cocaine at Spenders bar on Lyell Ave. in Rochester, NY when he got behind the wheel of his brother David Joseph's Ford Fusion and while racing on interstate 390 North, doing in excess of 80 miles per hour, rear ended a stalled vehicle which was parked on the shoulder.

In that vehicle was Alexis Sharpe, a young pregnant mother.

The impact ruptured Sharpe's placenta and she had to undergo emergency surgery, forcing her to deliver her daughter, Azaria, 14 weeks prematurely.

Joseph fled under the cover of darkness immediately after crashing into Sharpe's vehicle.

Key evidence in Joseph's trial included surveillance video from the bar which showed Joseph downing drink after drink, as well as cocaine residue on the airbag of the Ford Fusion.

So what did Rochester, NY Police Sgt. David Joseph's supervisor, Lieutenant Francis DiPrimo have to say about Sgt. Joseph running personal errands on duty, and on taxpayer time?

In fact, again, it was DiPrimo who gave Joseph permission.

And it was DiPrimo who also allowed a second officer, one which he refused to identify to drive Sgt. Joseph all tne way cross town to luck up his personal vehicle at that garage.

You can hear my phone conversation with RPD Lt. DiPrimo below.

Listen as Lt. DiPrimo immediately assumes that it was me who witnessed Sgt. David Joseph speeding.

What Lt. DiPrimo either fails to realize, or doesn't want to realize is that every day, throughout the country, more and more citizens are recording and documenting law enforcement officers misusing their tax dollars.

As you listen to my conversation with Lt. DiPrimo use words such as "it doesn't matter", in justifying Sgt. Joseph's reckless actions, keep in mind that this is exactly what I have worked so hard over the past nearly 20 years to expose.

The 'brotherhood' and 'thin blue line' culture which exists among law enforcement officers.

A disturbing culture where superiors refuse not only to take accountability for their officers' inappropriate, unethical actions and behavior, but actually encourage it.

An above the law, disturbing mentality of see no evil, hear no evil, speak no evil.

Ironically, it was this very well known law enforcement practice which allowed Rochester Police Sgt. David Joseph's brother, Nick Joseph to be one of the dirtiest cops in Monroe County history.