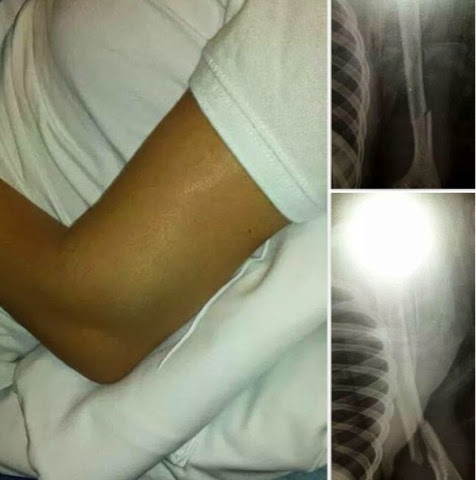 Less than a year after one of its police officers was arrested and charged with having unprotected sex with several women, knowing that he was HIV positive, the Greenacres, Florida Police Department is back in the spotlight.

In an exclusive story which I am breaking here on my blog, a young girl's father vows to seek justice for his daughter, after a Greenacres Police officer broke her arm.

The incident took place on Tuesday October 21, 2014 inside John I. Leonard High School.

That's where 15-year old Daniella Galindo was talking on her cell phone with her mom when Green Acres Police officer Jared Nash walked up to the teen, and asked her who she was talking to.

When Daniella replied that she was speaking with her mom, officer Nash demanded that she give him her phone.

When the teen refused, officer Nash grabbed the 4' 11", 90 pound young girl, slammed her against the wall, and twisted her arm, breaking it in two places.

Then, to add insult to injury, in the literal sense, as the young girl cried in pain with her arm broken, officer Nash pulled Daniella's arms back behind her back and  handcuffed her.

Galindo says that it was then that a school sentry named Perez told officer Nash to remove tne handcuffs.

"I want him fired," Jeremy Galindo, Daniella's father told me in a phone interview Sunday night.

"They (police) are saying that the officer's excessive force was justified because they say my daughter pulled away from him," Galindo said, adding, "So one of your officers breaks a minor's arm and you don't investigate?"

According to Jeremy Galindo, his daughter's assault by officer Jared Nash was caught on the school's video surveillance system, but school officials are refusing to release the video.

"They (school) have already admitted that there is a video, so they can't go back now and say that there isn't."

Galindo also told me that John I. Leonard High School officials never even told him what hospital his daughter had been taken to.

A police officer assaulting a child inside a school, a place that's supposed to represent a safe zone and a safe haven for children, is disturbing enough, but it's what Daniella's father told me during our phone interview which makes officer Jared Nash's rogue behavior and assault of an innocent child even more disgusting.

According to Jeremy Galindo, just a few days before officer Nash broke his daighter's arm, his daughter Daniella was chased by several girls after school, who wanted to jump her.

Galindo told me that as his daughter was running, she fainted, and a passerby came to her aid.

It was that same passerby who prevented her from being assaulted by the group of girls.

Galindo says he called Greenacres Police and filed a police report to document the incident, and that according to a Green Acres Police Sergeant, officer Nash went to the school because police believed that Daniella had a video on her phone of a fight that had occurred at the school days earlier.

But Galindo says it's ironic that officer Nash assaulted his daughter, and as a result, revictimzed the young girl, who just days earlier was bullied.

"My daughter was a victim," Galindo said.

"We initiated a police report, and they (police) ended up causing more harm than anyone."
Please Support My Film 'A Promise to My Dad'
'A Promise To My Dad' is a documentary film about a promise I made to my father at his wake, after he committed suicide.
The short film will explore my dad  Mario Vara's life as he leaves Cuba with my mom and my brother in 1968, in search of freedom and a better life for his family.
After moving to Rochester, NY, my dad realized that despite the promises of freedom and liberty that a life in America held, the harsh reality is that there are also many injustices as well.
In fact, my Dad will soon face very similar 'police state' tactics, as the ones he escaped his homeland for in the first place.
'A Promise to My Dad' highlights an incident in the 1980's, when Rochester, NY Police officers Mark Mariano and Randall Benjamin kicked down our home's front door, and illegally entered out home, terrorizing our family at gunpoint, even threatening to shoot our dog.
As a result of this incident. my father Mario Vara became outspoken against police abuse and misconduct.
Unlike many Americans who take their rights for granted, my Dad took a stand to denounce law enforcement violating U.S. citizen's civil rights.
Having lived a communist dictatorship, my father knew all too well what it was like to live in a totalitarian police state, where simply expressing one's dislike for Castro and his government could land you in prison.
My Dad was passionate in his denouncement of rogue cops abusing and violating citizen's civil rights in the U.S.
As a teen. I would tag along with my Dad and accompany him to community meetings, rallies, and marches where my Dad demanded accountability from those whose job is to serve and protect, as well as the elected officials whose job it is to keep them in check.
'A Promise To My Dad' features me telling my Dad's story, including talking about my father's depression and how it led to my father committing suicide in 1993.
'A Promise to My Dad' follows me as I struggle to keep the promise I made to my father to continue his work against police misconduct and corruption, while at the same time trying to find my own identity as a young man, then as a father myself.
Throughout the film I will confront my own struggles with depression, my father's suicide, and the effects that my work has brought to me and my family, including my children having received death threats.
One example of this came in August of 2014, when an ex-con who is known to work with the Rochester Police Department, as a paid confidential informant (C.I.) was captured on a store's surveillance video threatening to murder, and decapitate my 5-year old daughter.
Despite the video clearly showing the individual threatening to kill and decapitate an innocent child, Rochester Police and the Monroe County, NY District Attorney's office refused to charge the individual.
Please support my film "A Promise to My Dad" by making a donation.
It's easy to do.
Click on the 'Donate' icon located at the top right of this page and follow the easy steps.
All donations are secure through PayPal.
Any donation over $35.00 receives a free 'A Promise to My Dad' t-shirt.
Just be sure to include your address when making your donation.
Thank you.
Like me on Facebook