Hammond, Indiana Cop Smashes Car Window, Tasers Passenger Over Seatbelt Violation; "You're going to come out of the car one way or another, you want your kids to see you come out through the window?" 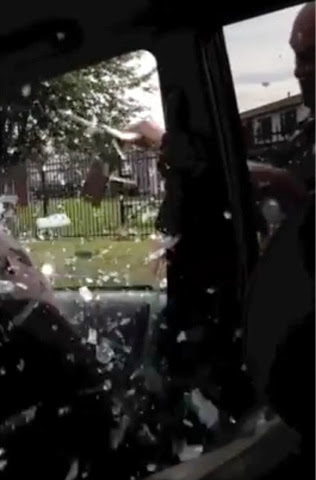 By Davy V.
Lisa Mahone was driving to Chicago with her boyfriend, Jamal Jones, and her two children, to see her dying mother,  when Hammond, Indiana Police officers pulled her vehicle over.
"The whole situation was just crazy, I said 'Oh my God, he's pulling me over like I robbed a bank'", Mahone said.
According to Hammond Police, officers pulled Mahone over on September 25th, because she wasn't wearing her seatbelt.
But what happened in the minutes following the traffic stop, is what has tne Hammond Police Department and the cops who pulled Mahone over, under an international spotlight.
And it was all caught on video, thanks to Mahone's 14-year old son,who was riding in the backseat, and recorded the entire incident.
The video begins with the Hammond cops asking Jamal Jones for his ID.
Jones tried to explain to the officers that due to a recent traffic ticket, he didn't have his ID on him, then Jones reached into the backseat to get the ticket to show the officers.
It was then that the police officers reached for their guns.
Afraid for his life as well as his girlfriend's and her children, Jones refused to open the vehicle's door.
"That's why I have my windows up," Jones tells the officers.
"I'm not no harm to you right now. I got my kids in the car and you're drawing your weapon."
Then, in a classic example showing just how rogue some cops are, when Jones asks for a supervisor, one of the officers tells him, "Look at my shoulder dumbass, I got bars!"
The cop then tells Jones, "You're going to come out of the car one way or another. You want your kids to see you come out through the window?"
Lisa Mahone can be heard talking on the phone with a 911 dispatcher.
"I am scared, and the man, pulled a gun out," she tells the dispatcher.
"A gun."
"Why do my kids have to see that."
A few seconds later, one of the Hammond cops can be seen putting some sunglasses on and stepping back.
The cop then smashes the passenger side window, sending glass flying on the children in the backseat, before tasering Jones.
The children are heard crying and screaming in fear.
"They had no probable cause, one, to even ask Jamal to get out of the car, or two, to engage in excessive force in tasering and arresting him." The family's attorney, Dana Kurtz said in a statement.
Had it not been for a smart young man who recorded this incident, there would be no proof of this very disturbing incident.
Surely the police would deny it ever happened.
At the very least they would lie and spin it to justify their illegal, thug-like actions and behavior.
Which is why i always say... COPS LIE. RECORD EVERYTHING.
I will be updating this piece.
Click the link below to watch the video.
http://youtu.be/XsW-QCxXkQA
Note: if you believe in what I do, exposing police misconduct and corruption, if you enjoy reading this blog, or even if it's your first time stopping through, please consider supporting my activism and my film 'A Promise to My Dad', by making a donation.
To make a donation, look for the 'Donate' button on the top right of the page.
All transactions are secure and go through Paypal.
Thank you.
Follow me on twitter https://twitter.com/davyvara