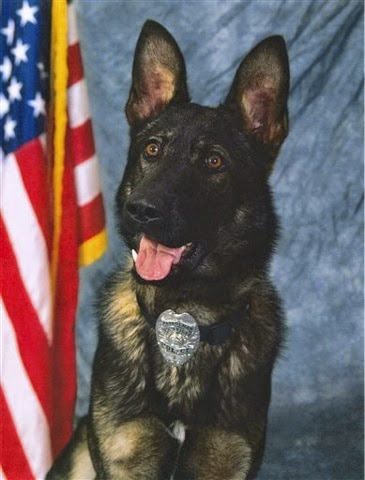 That old saying is so true.

Your dog doesn't care if you're dead broke, or filthy rich.

Your dog doesn't care if you  smell like roses or if you haven't showered in days.

And unlike some people, who are only interested in what you can do for them, your dog could care less about self-interest, or materialistic things.

In fact, from the moment you leave your house, although you may not realize it, your best friend will spend the whole day waiting for you to return.

That's why they are ecstatic to see you when you return home.

From the moment they hear your car door close and your house keys jingle, they're on the other side of that door, tail wagging, waiting to jump on you!

Let's be honest, your own family members are not even that excited to see you.

They won't betray you.

They will protect you.

This is especially true for police K-9 dogs.

Although many people don't realize it, a K-9 is a police officer.

A K-9 is his or her fellow officer's partner.

And just as a human police officer, K-9's encounter and face dangerous situations on a regular basis.

In fact, more often than not, a police K-9 is the first to encounter dangerous situations and their lives are put on the line, when their human counterparts send them in to locate armed suspects, or detect for explosive devices.

And it's those dangers which many times lead to K-9's losing their lives, protecting their partners, in the line of duty.

And they won't hesitate to lay down their lives.

Which is why it's disturbing when police officers neglect, physically abuse, and in some  cases kill their K-9's.

Take, for example, Montville, Ohio Police Sgt. Brett Harrison, who left his K-9 partner Beny, a 2-year old German Shepherd in his police cruiser, with the windows rolled up, and the car off for four hours, killing the K-9.

The K-9 died from heatstroke.

The incident took place on September 28th, when Sgt. Harrison left his partner in his cruiser, in the  police station parking lot from approximately 11 a.m. to 3 p.m.

According to the Montville Police Department, an internal investigation found that Sgt. Harrison violated departmental "policy and procedures."

According to Montville Police Chief Terry Grice, his department concluded that the K-9's death was an accident, and that video surveillance footage from a security camera showed a nervous Sgt. Harrison when he realized what he had done.

In a statement by Sgt. Harrison, he said expressed his "deepest apology" to the Montville Township, and to his "partner, friend and loving family member Beny."

How could a police officer forget his partner, who would lay his life down for him?

How can he leave his K-9 behind to die in a hot car with all the windows up?
Note: if you believe in what I do, exposing police misconduct and corruption, if you enjoy reading this blog, or even if it's your first time stopping through, please consider supporting my activism and my film 'A Promise to My Dad', by making a donation.
To make a donation, look for the 'Donate' button on the top right of the page.
All transactions are secure and go through Paypal.
Thank you.