With Monroe County, NY Judge Tom Moran, a Former Cop and Prosecutor Who Will Preside Over Trial of a Black Man Accused of Killing a Cop, Many Are Saying It Will be a Modern Day Lynching UPDATED: Thin Blue Line Ribbons Tied Around Trees Outside Courthouse 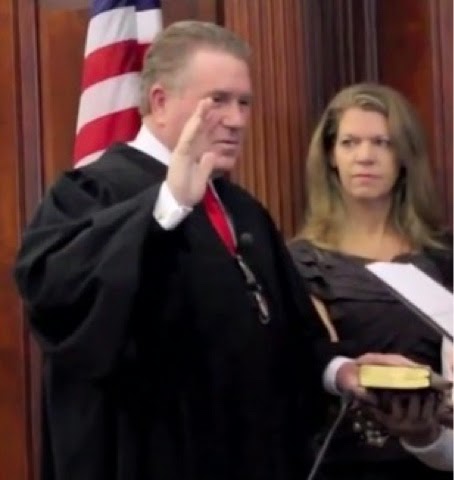 Judge Tom Moran with wife Kim Moran at swearing in ceremony
By Davy V.
UPDATE: THIN BLUE LINE RIBBONS TIED AROUND TREES OUTSIDE COURTHOUSE
Despite James Hinman, the attorney for Thomas Johnson III, the black man accused of killing Rochester, NY Police officer Daryl Pierson, asking Judge Thomas Moran Tuesday morning to make sure Rochester Police Thin Blue Line Ribbons which Rochester Police have tied to trees lining the Hall of Justice courthouse in downtown Rochester, are removed, those thin blue line ribbons still adorn several trees, some right across from the courthouse where Thomas Johnson III will be tried.
I guess in what many are calling a public lynching of a black man accused of killing a cop, a black man who is being tried by a judge who is himself a former cop, and prosecutor married to an ex-cop, they'll try anything and everything to influence the jury.
These ribbons are all over the place, where jurors can see them, and be influenced.
Check out the photos below: 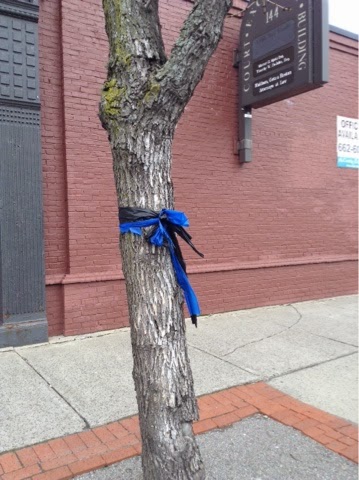 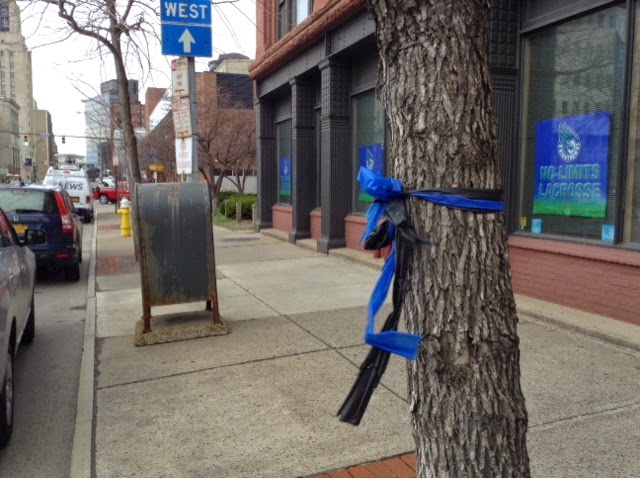 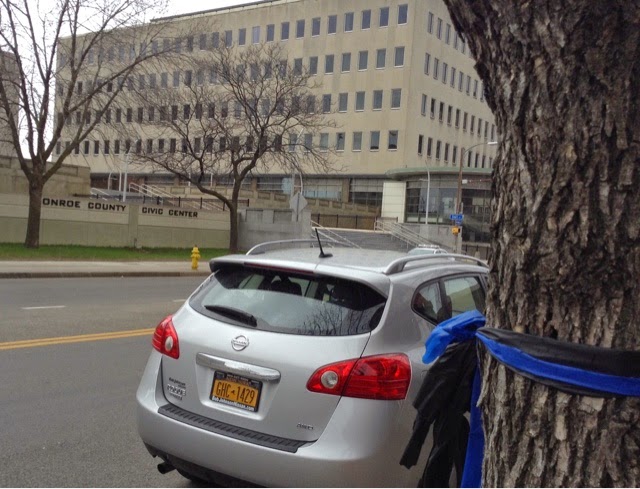 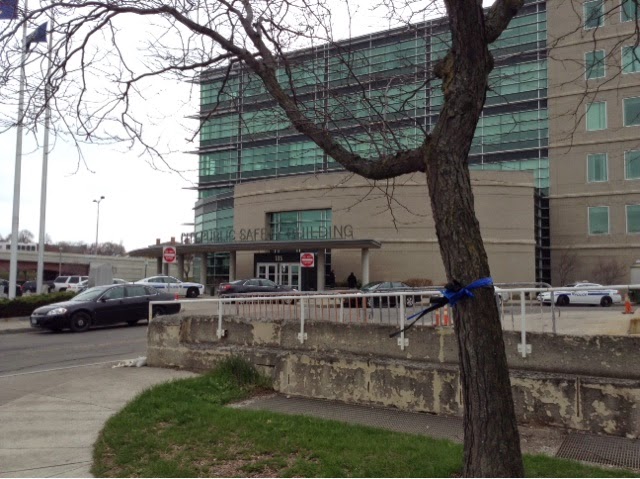 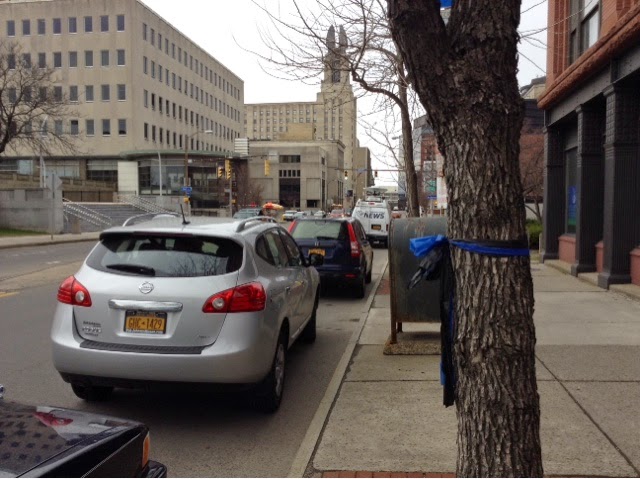 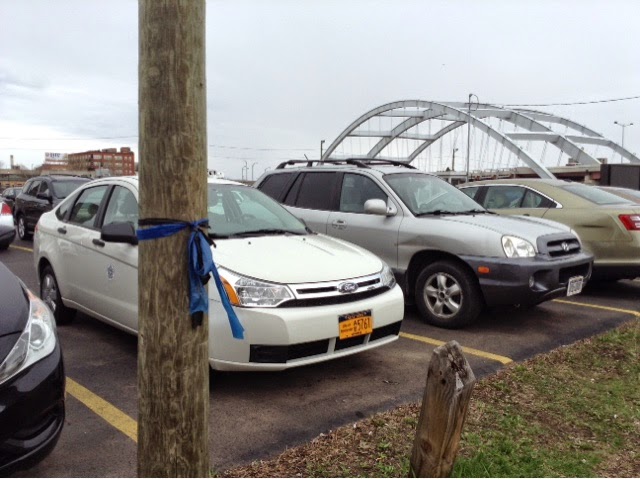 Thin Blue Line Ribbn in front of City of Rochester Police parking lot.
Photo by Davy V.
Read my original piece below.
By Davy V.
On April 21, Thomas Johnson III will go on trial, accused of shooting and killing
Rochester, NY Police officer Daryl Pierson during a September 3, 2014 unconstitutional
traffic stop on Rochester's northeast side.
He doesn't stand a chance.
Although Johnson's trial doesn't begin until April 21st, he's already been tried,
convicted and sentenced in a different court.
The court of public opinion.
You see, almost immediately after the September 3rd shooting, Rochester, NY's
mainstream news media did what they do best.
First they made a cop an instant "hero".
Not knowing ANYTHING about the cop, they made him a martyr.
But that's not all they did.
They plastered a black suspect's face all over the television and newspaper,
and they flooded the public with a one sided "story" of what happened during
that traffic stop.
The Rochester, NY Police Department's side.
But they didn't just flood and bombard the public with that one sided "story",
they actually helped seal the fate of Thomas Johnson III.
You see, that public that was bombarded and flooded with news report after
news report after news report of a black man shooting and killing a white cop,
was the same public who will meet in a large jury pool room on April 21, 2015.
But Rochester's mainstream news media wasn't done.
No.
They would make sure that they would exploit, sensationalize and milk the story
of a white cop shot by a black man, as much as they could.
And that's exactly what they have done.
For the last 6 months, it's been the most covered, and most talked about story
in Rochester, NY.
Never mind that Rochester, NY is ranked the third poorest city in the U.S. and our
city schools are in crisis.
And never mind that Rochester, NY Police officer Daryl Pierson was no hero.
In fact, Pierson beat a black woman outside a hospital emergency room.
(SEE LINK BELOW)
But Rochester's mainstream news media never reported that.
And they never will.
You see, the Rochester, NY Police Department, especially Mike Mazzeo, the Locust Club
Police union president will make sure that story stays quiet.
And Rochester, NY's mainstream news media doesn't care.
Rochester, NY's mainstream news media knew they had gold on their hands the
second they heard that call over their police scanner with the two words they love
to hear.
"Officer down."
You see, those two words to mainstream news media are priceless.
It's what they live for.
To exploit.
And to sensationalize.
It's what drives ratings.
And that's exactly what they have done.
Non stop for the last 6 months.
Exploit and sensationalize a cop's death.
And boost ratings.
And as a result of all that exploiting and sensationalizing, they have already
helped seal the fate of a black man.
Thomas Johnson III.
A black man who under our justice system is supposed to be innocent until proven guilty.
But Thomas Johnson III has already been tried.
And convicted.
And sentence.
In that other court.
The court of public opinion.
The same public from which 12 jurors, probably most of who will be white, will
decide a black man's fate.
A fate, which again, is already sealed.
Take, for example, New York State Corrections officer David Washburn.
Thomas Johnson's trial hasn't even started yet, but David Washburn has already
decided his fate.
Saturday morning, Washburn took to facebook with the following comment.
"I know Johnson from his last stint in state prison.  He was far form a model inmate.
He killed a cop to avoid going back to prison for violating parole.  Legal lynching or Not,
he should receive the maximum penalty."
"Legal lynching or not"?
NYS Corrections officer David Washburn's comment is indicative of the exact same
thing I mentioned earlier.
Thomas Johnson III has already been tried.
And convicted.
And sentenced.
Or what about Kristin Hart Daly's posts on Twitter?
Daly, a stay at home mom and blogger, whose Twitter name is @EyeHartKristin,
and who just happens to be married to a Monroe County, NY Sheriff's Deputy posted
the following tweet, which she directed at me.

But perhaps more disturbing than David Washburn or Kristin Hary Daly's comments
if there can actually be anything more disturbing than a prejudiced corrections officer
and a cop's wife who have already convicted a black man, is who will preside
over the trial of Thomas Johnson III.
A former cop turned prosecutor, who is married to an ex-cop.
New York State Supreme Court Justice Tom Moran.
Let me give you a little history about Tom Moran.
Tom Moran was hired in 1978 as Brighton, NY cop.
In 1986 Moran began a career as a defense attorney.
In 1992 Moran was elected as Livonia, NY Town Justice, until he became a prosecutor
for Livingston County, NY, where he remained until being elected as New York State
Suprene Court Justice in November of 2011.
And Judge Tom Moran's wife Kim, is a former Livingston County, NY Sheriff's investigator.
So let's see, a judge who is a former cop, and prosecutor, who is married to a former cop, will
preside over a trial of a black man who is accused of killing a cop?
A black man who has already been tried, convicted, and sentenced by the public?
Yep.
Thomas Johnson III doesn't stand a chance. 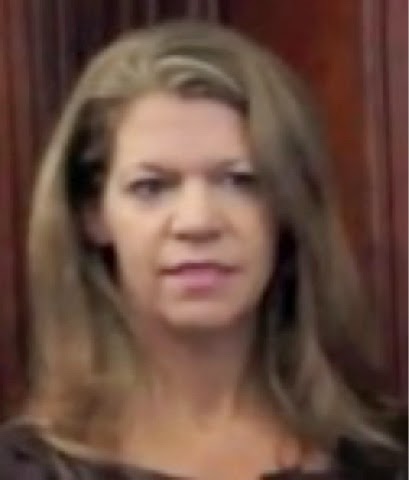 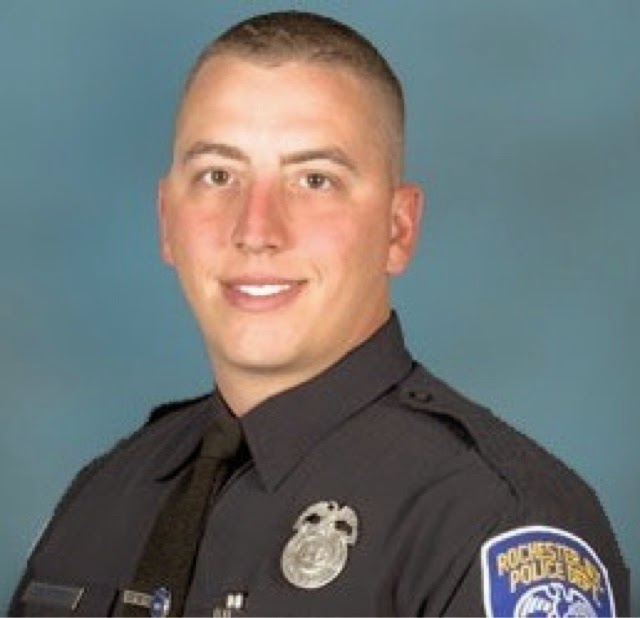