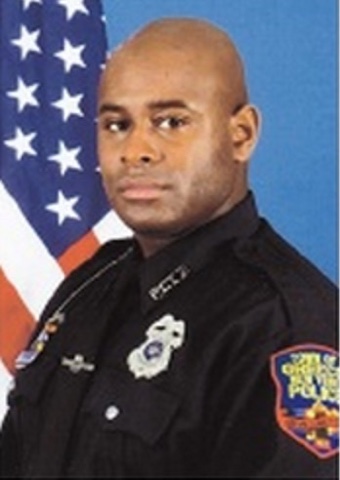 Greece, NY Police officer Eric Hughes
Updated Tuesday June 2, 2015 5:57 p.m.
Despite the fact that in the photo below, Greece, NY Police officer Eric Hughes, the cop who shot and killed a suicidal young man Monday afternoon in a mall parking lot, is wearing a body camera, Greece, NY Police Chief Patrick Phelan said that officer Hughes was not wearing a body cam on Monday.
Chief Phelan said that as of this point, body cams are "experimental" and if they are worn by officers, it is solely on a "voluntary basis."
How convenient for the Greece, NY Police Department.
One of their cops shoots and kills a suicidal young man and he doesn't have a body cam that day.
Like he has on in the photo below.
WTF? ... MAN SAYS GREECE, NY POLICE OFFICER ERIC HIUGHES IS A GOOD COP BECAUSE HE BUYS LEMONDADE FROM HIS SON'S STAND.
For years I have talked about the relationship between mainstream news media and law enforcement.
A relationship where mainstream news media is co-dependent on law enforcement, depending on them to give them tips, leads, updates, and overall keep them "in the loop" when it comes to major news stories.
Mainstream news media is very careful to preserve this relationship, so much so that they are always careful not to "bite the hand that feeds them."
In return, mainstream news media often helps law enforcement when law enforcement is under the spotlight of public scrutiny.
Such as the Greece, NY Police Department is in this case, with many questioning the shooting and killing of a young man who was suicdal amd needed help, not two billets in his chest.
In order to spin this story in favor of the Greece, NY Police Department, and justify Greece, NY Police officer Eric Hughes executing a suicidal young man, Rochester, NY's NBC affiliate, News 10NBC interviewed a Greece, NY man who has absolutely nothing to do with the incident, and they ran a story about the man supporting officer Hughes' actions because, as the man said, officer Hughes buys lemonade from his son.
Yes lemonade.
Tyler does his lemonade stand and officer Hughes comes and buys lemonade from him, talks to him and sees how he's doing," Justin Pappas said.
According to Pappas, Hughes is the school resource officer at his son Tyler's school.
If you ask me, after shooting and killing a young man who needed help, I don't think officer Eric Hughes should be allowed in any school where he is around young people.
Read my original piece below.
By Davy V.
Imagine calling police for help in locating a loved one who is suicidal, only to have police shoot and kill them.
That's what happened Monday afternoon in Greece, NY, a suburb of Rochester.
According to Greece, NY Police Chief Patrick Phelan, his officers had been looking for a despondent suicdal man.
That young man has been identified as 23-year old Joseph Ladd.
Greece, NY Police officer Eric Hughes found Ladd in a gray Toyota Camry in the parking lot of The Mall at Greece Ridge Center, one of the biggest shopping malls in the greater Rochester, NY area.
Ladd was with his girlfriend, and even though he was suicidal, before he had a chance to hurt himself, Greece, NY Police officer Eric Hughes shot him dead.
Chief Phelan said that as his officer approached Ladd, the Toyota Camry drove off.
Phelan said that Ladd's girlfriend was behind the wheel.
Phelan claims that officer Hughes was partially inside the vehicle and that that's when he shot the young man twice on the chest, killing him.
Phelan said that Ladd had a loaded handgun but would not say if Ladd ever threatened officer Hughes with it.
The events began when Ladd's family called 911 to report that he had just taken a large amount of Xanax and that he suicidal.
"Family members called us early in the day that they were concerned for his safety," Chief Phelan told reporters outside the mall Monday afternoon.
"Possibly some statements he made before he left so we had been looking for him to check on his mental health."
Phelan added, "Something occurred, and the suspect was shot dead by one of our officers."
That officer has been identified as Eric Hughes, a 15-year veteran of the Greece Police Department.
Hughes is also a school resource officer.
Joseph Ladd was shot and killed in the parking lot of The Mall at Greece Ridge Center, one of Rochester, NY's biggest shopping malls, near a Sears and Target store.
They Mpoiy is the man's friend.
Mpoiy is questioning the Greece Police Department's story.
"We don't know the whole story of what happened, so we can't talk on it, said Mpoiy.
Mpoiy makes an interesting point when it comes to police body cameras.
"And regardless, police are supposed to be wearing body cameras in Greece, so of the cop's wearing a body camera, like he's supposed to be doing, we can see what happened. But he probably wasn't so we probably won't see what happened."
And speaking of body cameras, while I was updating this piece, I found an interesting photo online of Greece, NY Police officer Eric Hughes.
Wearing a body camera. (See photo below)
So where's the video?
Let's see it.
As for the man's friend, Theo Mpoiy, he lives close to the mall and actually saw all the police cars rushing to the scene.
Little did he know his friend had just been shot and killed by the very same people who were supposed to find him and make sure he didn't harm himself. 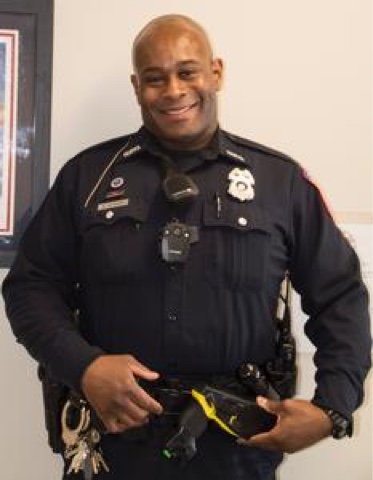