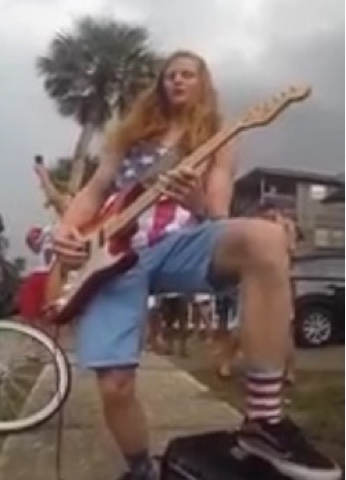 Lane Pittman plays "The Star Spangled Banner", moments before he's arrested
By Davy V.
Lane Pittman has always respected police officers.
But that's changed.
And with good reason.
That's because Pittman was arrested by Neptune Beach, Florida Police.
His crime?
Well, according to cops, breaching the peace.
By playing the national anthem on his electric guitar.
On a public sidewalk.
On the Fourth of July.
Yes.
The Fourth of July.
Here's the story.
Pittman, a high school lacrosse coach who plays in his church band was playing "The Star Spangled Banner" around 3 p.m. on the fourth at Neptune Beach, near 1st Street and Margaret Street when a Neptune Beach Police Sgt. rolled up.
According to Pittman, the Sgt. told him to move away from the street, or go to jail.
Pittman says that's when he asked the Sgt. if he could play on the sidewalk.
The Sgt. said he could.
So Pittman, dressed in an American flag jersey, matching socks, jean shorts, and sneakers, began cranking out "The Star Spangled Banner." (See video below)
Pittman's playing  soon drew a crowd of about 200 people, who began cheering him on and chanting "U.S.A.!"
And that's when the boys in blue rolled up.
Again.
And arrested Pittman.
For playing "The Star Spangled Banner."
So what does Neptune Beach Police Chief David Sembach have to say about this very unpatriotic act by his officers?
"Out of respect for the national anthem, they let him finish the national anthem," Chief Sembach said.
"He was told he was going to have to stop playing. He went to the sidewalk and continued playing, and it was only after that that the crowd was getting hostile, so the only way to stop it, since he wasn't going to stop playing, was to take him out of the location."
Oh.
I see.
Hmm...
But "breaching the peace"?
I don't get it.
Is playing an electric guitar louder or any more disruptive than huge thunderous and ground shaking fireworks explosions that are put on by cities and towns throughout the country on the 4th?
So there you have it.
An American.
Arrested.
On INDEPENDENCE DAY.
For playing America's theme song.
On The Fourth of July.
Also known as The Good Ol' U.S. of A's Birthday. 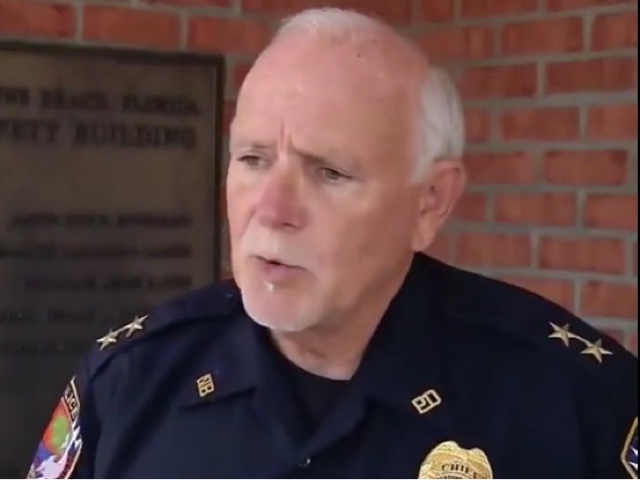 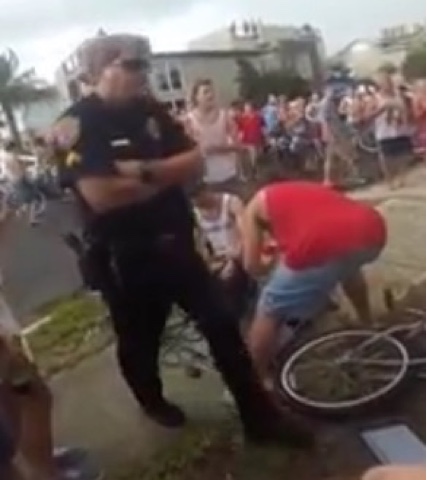