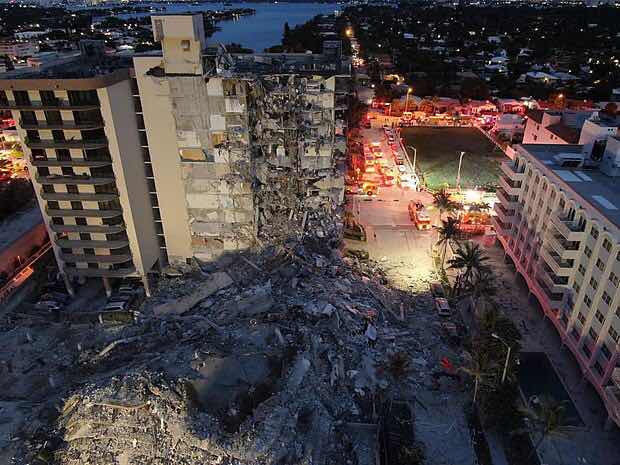 Champlain Tower South in Surf Side, Florida after collapse.

Numb and surreal are perhaps two of the best words I can use to describe the Surf Side condominium collapse.

The Champlain Tower South condominium located on Collins Avenue in Surf Side, Florida about 20 minutes north of Miami Beach collapsed in the early morning hours of June 24, 2021.

In many ways it brings back memories of 9/11.

However, unlike 9/11 which was pretty clear from the first plane that struck the twin towers that it was an intentional terrorist attack, the cause of the condo collapse in Surf Side is not yet known and probably won’t be for a long time.

As of the time I am writing this a total of 32 people who died in the Champlain South condominium collapse have been pulled from the concrete rubble and another 113 remain missing.

Throughout all the pain of this tragedy the one thing which has been so good to see has been the outpouring of support from people in South Florida as well as throughout the country and the world.

A father and his son brought pizzas for family members who had gathered at a community center to wait for news of their loved ones who were missing after the collapse.

Others immediately pulled up to drop off more donations, their vehicles packed with items including bottled water, clothing and diapers for displaced tenants.

Within just a few days of the collapse, money donations had reached 2 million dollars.

Seeing this amount of caring and support from complete strangers has been so refreshing, and truly is a beautiful thing.

People from all over the world have offered their help.

These search and rescue teams joined Miami-Dade Fire and Rescue who have been on the site of the condominium collapse from the moment the first 911 calls went out.

Together, all these brave men and women are true heroes, working tirelessly to save lives as well as to recover those who died and also help their family members begin to find much needed closure.

Seeing President Biden travel to Surf Side and meet with family members of the victims of the collapse was also a beautiful thing.

It’s something we all needed.

To once again have a real leader.

Someone who understands pain and loss.

Not someone whose idea of showing empathy and support for victims of tragedies is throwing rolls of paper towels at them.

Please keep everyone in your prayers.