'Counterpunch', Powerful and Touching, Much more than just another Boxing Movie 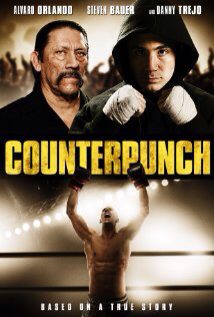 Counterpunch is a powerful film about a young boxer named Emilio, played by Alvaro Orlando, on a quest to win the Golden Gloves boxing championship.

Emilio's most important fight however, takes place outside of the ring, as he confronts some personal issues including being bi-polar, and seeing his mom involved in an abusive relationship.

Shot in just 15 days, the film is based on a true story and was written by Alvaro Orlando, and co-written by award-winning director Kenneth Castillo, who does an excellent job directing the  film.

The audience also sees the bond that Emilio has with his best friend, his pit bull 'Mr. T.'

Throughout the film, Alvaro Orlando's acting is so powerful and convincing, that there were times when I forgot that I was watching a film, and I felt more like Emilio was someone I knew in real life.

Emilio is likable, yet withdrawn.

Interestingly enough, this well balanced mix makes for an even stronger connection with the audience.

Danny Trejo's character 'Manny' seamlessly connects with Emilio as the counselor and mentor who treats Emilio like a real person and not just a patient.

'Manny' forms a bond with Emilio and helps him believe in himself.

Torre shines as 'Uncle Frank', an ex-boxer and trainer who not only helps prepare Emilio for the film's climatic fight finale, but most importantly, helps his nephew by being a loving uncle and a stable support system for Emilio, something that's been missing in his life.

Talia wants to become a boxing promoter like her father, and looks to Emilio as her first fighter.

Like the rest of the performances in this film, Banus's character comes alive, as she genuinely grows to care about Emilio.

Counterpunch is a great film that grabs you from the beginning.

As someone who has had mental illness touch my family personally, I applaud Alvaro Orlando and Kenneth Castillo for shedding light on a subject often overlooked and shunned in today's society--mental illness.

Counterpunch is a must see film.

Counterpunch, on Lionsgate Films is available on Video on Demand as well as major retailers.