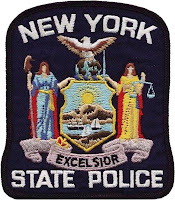 For New York State Trooper Martin T. McClellan, who has made countless DWI arrests in his career, it's 'Do as I say, not as I do', when it comes to driving while intoxicated.

That's because on February 28, 2012, the 30-year old McClellan, of Rochester, NY, made a decision to put innocent lives at risk by getting behind the wheel of his vehicle, drunk.

McClellan crashed his vehicle on Interstate 490 in the town of Gates, NY.

The off-duty McClellan suffered a broken leg in the one-car crash.

McClellan's blood alcohol content was .18, more than three times the legal limit, and in fact reached the level of Aggravated Driving While Intoxicated.

As a result of the injuries he suffered in the crash, McClellan is on extended sick leave.

He was issued tickets and has been charged with Aggravated DWI.