Rochester, NY Police Cruiser Crashes into Driver's Vehicle after Officer Forgets to Put it in Park During Traffic Stop 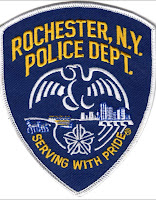 Rochester, NY custom clothing designer Richard Greyfaces, of Greyfaces Clothing, had just pulled the Cadillac Escalade into the Sunoco gas station at the corner of W. Main and Reynolds Streets, when he noticed Rochester, NY Police officer Bryan Brown IBM# 2116 behind him with flashing lights.

Not sure if Brown was pulling him, or another vehicle over, Greyfaces did what most people would do in the same situation, he turned the vehicle off and remained seated.

"I didn't know who he was pulling over, he got behind me and walked up to the truck really fast, then I heard boom!", said Greyfaces, before adding, "The whole truck rocked, then the officer ran to his car and I got out to see what was going on, as I was scared and thought maybe another car had hit his car, then I saw the officer backing his car up and I asked him did somebody hit his car and he said 'No, I forgot to put my car in park.'

Several Rochester, NY Police officers soon arrived, followed by the Sgt. who looked at the damage to the Escalade's rear.

Unbeknownst to Greyfaces, a white man, driving a beautiful Cadillac truck in the hood, Rochester Police officer Brown, had profiled him, a common practice, especially when it comes to the Rochester, NY Police department.

But perhaps, the most interesting thing here is it shows just how thirsty these Rochester, NY Police officers are, profiling motorists, and so anxious to run up on innocent people, that they forget to put their cruisers in park.

Literally, Laughing My Ass Off!