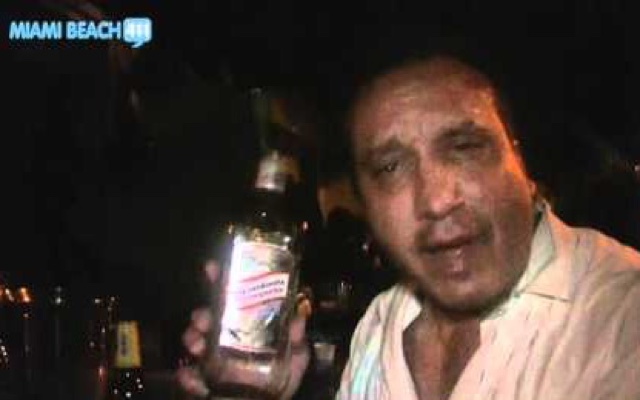 A drunk Carlos Miller at a Miami bar before going out to confront law enforcement officers.
By Davy V.

If there's one thing I love just as much as I love exposing dirty, rogue cops, it's exposing fake, hypocritical, wannabe 'activists' who clearly have ulterior motives and agendas.

Take, for instance, Taylor Hardy, a Miami, Florida photographer, who claims to be a 'protector' of citizen's first amendment rights.

On August 19th, I wrote about an incident involving Hardy and an over zealous Miami, Florida Police Sgt. who threatened to beat the photographer for doing nothing more than taking photos.

Hardy, who owns Miami Impulse Photography, was taking photos of an ESPN commercial starring Miami Heat basketball star LeBron James, in Miami's Allapattah neighborhood, when a film production crew member told Hardy that he could not take photos and ordered him to move.

When Hardy refused, the crew member called over a Miami-Dade Police Sgt. who was working security for the event.

The Sgt. ordered Hardy to move.

Hardy explained to the Miami Police Sgt., that he had a right to be there, just as the other people who were there.

It was then that the Miami Police Sgt. grabbed Hardy's camera, trying to take it from him.

Hardy told the cop he had as much right to be there as the other people, which prompted the cop to grab his camera by the flash in an attempt to take it from him.

Hardy told the Sgt. to let go of his camera, to which the Sgt. told Hardy that if he did not let go of the camera, he was going to jail.

The MDPD Sgt. then told Hardy “‘If you say one more fucking word, I’m going to throw your head on the ground and beat the fuck out of you!", and arrested Hardy.

This is not the first time that Hardy has stood up for his right to record, a right guaranteed to all citizens, under the first amendment.

In fact, on Thursday March 21, 2013, Hardy was video recording a Miami-Dade Fire Rescue helicopter landing in a field, when MDFR Capt. Greg Smart became irate that Hardy had recorded the copter.

Before that incident, Hardy also held his ground when Miami-Dade Police told him he could not stand on a public sidewalk, where he was taking photos.

In that video, which I have also posted below, Hardy educates the officer on his right to take photos, and after a few minutes, the officer, realizing Hardy knows his rights, simply gives up.

So you see, when it comes to his right to take photos and record video, Taylor Hardy will stop at nothing to protect HIS right.

That right that he, as well as you, and as well as I have to take photos, and videos.

Well, not so fast.

It seems as though Taylor Hardy is a fake, and a hypocrite.

Many of you may know Carlos Miller, of the website Photography is Not a Crime, or "PINAC", which features incidents where law enforcement officials threaten, intimidate, and in some cases physically assault, or even arrest people for doing nothing more than excercising their first amendment rights to photograph and video record them.

While I have always respected Miller's work, and considered him a friend, my opinion of him as a friend, and as a person quickly changed last week.

I reached out to Miller several times, via phone calls and texts, as I needed his help with my 86-year old aunt who was housebound.

Since my aunt lives on the same street Miller does, less than 5 blocks away, Miller had always offered to check up on my aunt, or help out in any way.

Well, not this time.

Carlos Miller ignored each text and each voicemail, where I pleaded for his help as a friend.

Miller later publicly admitted that he intentionally ignored my pleas asking for his help with my aunt.

Well, a few weeks prior, I publicly questioned some 'activists' who Miller is friends with.

I questioned their true motives, as some of these 'self proclaimed' activists clearly have other agendas.

Although my criticism of these individuals had nothing to do with Miller, and in fact I sent him several messages clearly telling him that, Miller decided that for some reason, I didn't have the right to express my opinion of certain individuals whose conduct is at best, suspect.

And Carlos Miller decided that the way he would retaliate against me, for criticizing certain individuals who he is connected with, was by ignoring a friend reaching out to him, to help a beautiful 86-year old woman, who is like my mother.

I don't know about you, but anyone who intentionally refuses to help an elderly person in a time of need, like Carlos Miller did, is not worthy of the title 'friend'.

In fact, anyone who refuses to help out an elderly person period, is a piece of trash.

After all, most people misuse the word 'friend', when they really should be using the word  'acquaintenance'.

A 'friend' would have never done what Miller did.

The incident set off a fire storm, with Miller, and his supporters boasting on social media nasty, offensive comments, approving of Miller's refusal to help my aunt.

Although I'm the type of person to usually cut someone off and be done with them, I just couldn't believe what a nasty individual Carlos Miller really is.

Knowing that most people, especially his supporters have not seen the real Carlos Miller is, I decided to expose him for what he is.

Carlos Miller is an alcoholic.

I only bring that up because Miller's alcoholism, not only makes him a very nasty person, but it also has created, and escalated many of the confrontations he has had with law enforcement officers, which he then posts on his site "PINAC".

Take for instance, the video below, of Carlos Miller at a Miami Metrorail station.

Miller is drunk, and although in the video, 50 State Security guards act like over zealous cops, the video shows much more than that.

If looked at from a truly objective and unbiased point of view, the video shows a drunk Carlos Miller making an already bad situation, worse, because that's what he does best.

Get drunk and create confrontations with police.

But that's something which most people don't realize because they don't know Carlos Miller personally.

And Miller has found a way to fool his followers into believing he's something he's truly not.

And, since most people don't question things, what happens is they think Miller is some sort of "First Amendment Rights Crusader", when there's really a lot more they don't know.

A drunk Carlos Miller at a Miami bar before going out to confront law enforcement officers.
For example, when it comes to the video below, of Carlos Miller at the Miami Metrorail station, Miller was actually not supposed to be there.

Miller, who already had a lawsuit pending against 50 State Security, over yet another incident which he contributed to, had been ordered not to trespass on the station's property pending the lawsuit.

Of course Miller will deny that, but the fact is even Miller's own attorney advised him to stay away from the station.

But Miller, who at this point is lawsuit happy (he has other lawsuits pending including one against the Miami-Dade Police department) went out drinking, got drunk, then decided to go to the Miami Metrorail station, and provoke the incident.

The video you see below, of a drunk Miller escalating, and as a result, creating what ends up turning into a physical altercation, "a la Carlos Miller!"

(Pay attention to the 11:00 minute mark of the second video below, where a Hialeah, Florida Police officer asks Carlos Miller why is he shaking, a side effect of alcohol withdrawal.)

Ironically, when I was outspoken and questioned some of Miller's associates, on their true motives and agendas, this was exactly the kind of thing I was referring to.

"So-called activists" who are going around doing a disservice to the real work of activism as it pertains to exposing police misconduct, corruption, and holding police accountable.

Individuals such as Carlos Miller, with his drunk adventures, actually hurt the greater cause for those in the fight for police accountability.

So, what does Miami photographer Taylor Hardy have to do with this?

Well, after Carlos Miller posted several social media comments saying he doesn't drink, and if he does, he never gets drunk, I decided to post proof which shows he was lying.

The second video below shows a drunk Miller.

The video was taken while I was visiting Miami with my family.

Taylor Hardy is also in the video.

And this is where the hypocrisy sets in.

Birds of a feather, stick together.

Check out what Taylor Hardy, who by the way had nothing to do with my disagreement with Carlos Miller, tweeted me yesterday!

Hardy then tweets this one.

He will protect HIS Right to Record.

What's disgusting is that what Taylor Hardy says to me in his tweet, is exactly the same thing many law enforcement officers say and do to intimidate innocent citizens when they exercise their Right to Record, which shows what a hypocrite Hardy is.


If people can't see, what hypocrite, fake, wannabe 'activists' individuals like Taylor Hardy and Carlos Miller are, then frankly, they deserve to be duped by these cons, a drunk, and a hypocrite.

Click Play below to watch the video of a drunk Carlos Miller escalate a 'confrontation' with Miami Metrorail security officers, then provoke his own arrest.

Pay close attention to the 11:00 minute mark of the video where a Hialeah Police officer asks Carlos Miller why is he shaking, a side effect of alcohol withdrawal.

Click Play to watch my video, the video Taylor Hardy threatened to arrest, and sue me over!