In June of 1986, Rochester, NY Police officers Randall "Rambo" Benjamin and Mark Mariano kicked in the front door to my family's home at 184 Child Street, terrorized me, my brother, my mother, and my father at gunpoint, threatened to shoot our family dog, and illegally searched our home without a warrant, overturning mattress, dresser drawers, and destroying our personal belongings, including my baseball trophies.

I was crying when the officers threatened to shoot our family dog, before officer Mariano grabbed me by my shirt, slamming up against the hallway wall, lifting me off the floor, yelling at me to shut up.

Benjamin and Mariano were acting on a false report made by an alcoholic next door neighbor of ours whom they knew very well from countless prior arrests.

This neighbor was upset that my father refused to give him money to buy alcohol, so he called Rochester Police, drunk, and lied to them, telling them that my Dad had a gun in the house.

No gun was ever found.

I remember officer Benjamin laughing in my brother's face, and asking him "Who are you, Perry Mason?", when my brother told both officers that they had no right to do what they did to our family, and that what they did was against the law.

As someone who was always taught to respect law enforcement, the incident forever changed my life and the way I looked at police, and is what led me to become an activist and advocate against police misconduct and corruption.

There's a reason for the "Rambo" nickname that Benjamin earned working out of the Rochester Police department's Maple Section on the city's west side.

Throughout the years I continued to hear about incidents where Rochester, NY Police officer Randall "Rambo" Benjamin abused innocent people, like he did to me and my family.

Benjamin was later promoted to the Rochester Police department's Major Crimes Section as a homicide investigator.

In 2010, Randall "Rambo" Benjamin became the focus of an investigation by the FBI.

Benjamin was tied to several federal cases where criminal defendants were considered for reduced prison sentences, as a result of false and misleading information which he provided to judges in those cases.

In essence, Rochester, NY Police investigator Randall "Rambo" Benjamin was illegally, and unethically working out deals with criminals where he would help these criminals obtain lighter sentences, based on false and misleading information which he, and other RPD investigators gave to judges.

Many say that in exchange for helping these criminals receive lighter sentences, Benjamin received money, and other favors.

Unfortunately, but not surprising, the FBI investigation against Rochester Police investigator disappeared overnight, being swept under the rug, never to be heard of again, with Rochester's Corporate-America mainstream news media never reporting, or printing another word about it.

Which is why, given Rochester Police investigator Randall "Rambo" Benjamin's long history of misconduct and corruption, I found it both interesting as well as disturbing that he is the lead investigator in the homicide of Matthew Straton, the 31-year old man who went missing in October. 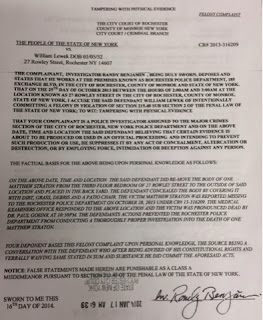 On Thursday, almost three months since Straton's disappearance, his body was found buried in the backyard of 27 Rowley St.

The home's owner, 62-year old Dr. William Lewek, was arrested and charged with tampering with evidence, as well as an intent to sell crack cocaine charge.

As you can see in the photo to the right, in the sworn affidavit, Rochester, NY Police investigator Randall "Rambo" Benjamin accuses William Lewek of removing Matthew Straton's body from the third floor of his home, then burying it in his backyard.

I wonder if Rochester, NY Police homicide investigator will try to get this suspect a deal.


Please support the work I do by making a donation.