Eric Smith's girlfriend called 911 after her boyfriend passed out on the floor of their East Rochester, NY apartment, and became unresponsive.

Getting an early start on St. Patrick's Day festivities, Smith, a Warped music band tour manager who had not drank alcohol for some time, became sick after drinking for several hours.

Within minutes of his girlfriend's call to 911, four female EMS technicians arrived.

According to Smith's girlfriend, by that time, Eric Smith was coherent and told the EMS technicians that he did not want to go to the hospital.

Then, as I've pointed out for years, at that point, the East Rochester Police officers and Monroe County Sheriff's deputies did something law enforcement officers seem to be very good at.

Several of the E.R. cops and MCSO deputies grabbed Eric Smith and told him that he had to go to the hospital.

The officers ignored her.

She then asked the officers to leave their apartment.

The officers became irate and at least one officer grabbed Eric Smith's girlfriend, and handcuffed her.

It was then that several of the officers jumped on Smith, and at least one officer tasered him several times.

A taser deploys a powerful 50,000 volt electrical current shock which completely overrides the person's central nervous system and paralyzes them, preventing them from having any control over their muscles.

But it's important to remember that the 911 call was not for a domestic dispute, which any police officer will tell you, is the most dangerous call for service that they respond to, as the officer(s) is coming into what many times can be a volatile situation where emotions run high.

"I specifically told 911 that I was concerned for his health," Smith's girlfriend told me when I visited the couple Sunday afternoon.

"They (police) did not have to what they did, there was no need for it."

In addition to tasering Smith, officers also used the taser on him several times as what is called a 'Drive Stun'.

As you can see in the photos to the right, officers used both wire prongs and drive stun options on Smith several times.

And that's one of the things that Smith's girlfriend finds very disturbing.

" I feel that the reason for a police officer to use taser on someone is if they have to defend theselves," she said.

"But Eric wasn't doing anything wrong."

And look at him, all the times they tasered him and stunned him with the taser were on his back, how is someone a threat of their back is to you?"

"There was absolutely no need for them to do what they did to Eric," she said.

But it gets worse.

At one point, one of the officers, who was wearing leather gloves, grabbed Eric Smith and punched him several times in his face.

"He was on his knees, handcuffed, and they were punching him in his face," said Smith's girlfriend.

The officers then dragged the handcuffed Smith down a steep flight of stairs.

"They didn't even put any clothes on him, they dragged him out in his boxers," Smith's girlfriend told me.

Smith was transported by ambulance to Rochester General Hospital where he was treated multiple injuries including an "orbital wall fracture" to his left eye socket.

Neither Eric Smith or his girlfriend were charged with any crimes.

And, as you can see in the photos, he loves ink.

Add to that the fact that Eric's girlfriend is Caucasian.

I strongly feel that both the East Rochester cops as well as the Zone A Monroe County Sheriff's deputies entered that apartment without a warrant, inserted themselves in a situation where they were NOT needed, refused to leave when they were asked, then profiled Eric for two reasons.

Those police officers did exactly what I have criticized law enforcement officers for doing for years.

They created, then escalated a completely unnecessary situation.

But most important, and disturbing, they allowed their prejudiced, pre-conceived perceptions of a 'certain look', prevent them from abiding by the oath they swore to uphold.

And as a result, they beat an innocent man.

As this story is going viral, East Rochester, NY Police officers have returned to Eric Smith's apartment in a show of intimidation.

Below is a photo Eric sent me of an East Rochester, NY Police cruiser parked right outside his apartment building. 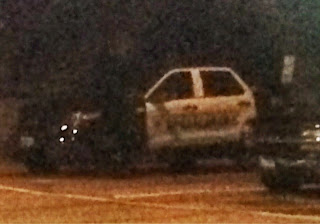 
Note: My upcoming book will focus on citizen's first amendment right to record law enforcement officers, both by photographing, and video recording them.

ALWAYS be ready to document ANY interaction with law enforcement...