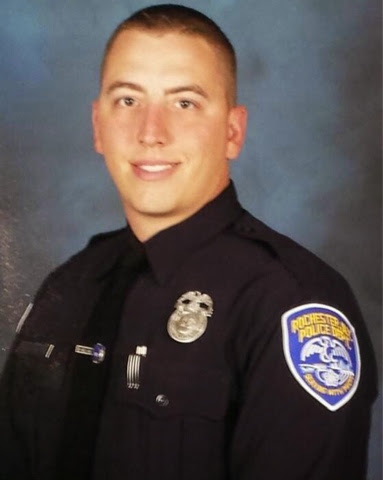 Black and Latino men DO NOT trust the police.

And I have reason not to.

As a Latino child,I was taught at an early age that the police were there to help you.

That they were your friend.

And that if you were in trouble, you would call the police and they would help you.

Although I'm too young to remember the TV show Adam-12, basically I was taught that police officers were nice people who would help get your cat out of a tree.

AN ILLUSION SHATTERED. POLICE OFFICERS ARE NOT YOUR FRIENDS.

Armed thugs with uniforms and badges.

In June of 1986, after an alcoholic next door neighbor called the police on my dad to get back at my dad after my father refused to give him money to buy beer, Rochester, NY Police officers Randall "Rambo" Benjamin and Mark Mariano kicked in the front door to my family's home at 184 Child Street, terrorized me, my brother, my mother, and my father at gunpoint, threatened to shoot our family dog, and illegally searched our home without a warrant, overturning mattress, dresser drawers, and destroying our personal belongings, including my baseball trophies.

I was crying when the officers threatened to shoot our family dog, before officer Mariano grabbed me by my shirt, slamming up against the hallway wall, lifting me off the floor, yelling at me to shut up.

Benjamin and Mariano were acting on a false report made by an alcoholic next door neighbor of ours whom they knew very well from countless prior arrests.

This neighbor was upset that my father refused to give him money to buy alcohol, so he called Rochester Police, drunk, and lied to them, telling them that my Dad had a gun in the house.

No gun was ever found.

I remember officer Benjamin laughing in my brother's face, and asking him "Who are you, Perry Mason?", when my brother told both officers that they had no right to do what they did to our family, and that what they did was against the law.

As someone who was always taught to respect law enforcement, the incident forever changed my life and the way I looked at police, and is what led me to become an activist and advocate against police misconduct and corruption.

In 1997, Rochester, NY Police officer Nick Joseph illegally broke into my home with his partner RPD officer Lamar Cousins, with guns drawn, and pointed at me, assaulted me, handcuffed me, then pushed me face first against his cruisers open door.

Nick Joseph had come to my home to retaliate against me, for my having videotaped his brother, David Joseph, now a Sgt. with the RPD's west side division, abusing a Jamaican motorist during a traffic stop in front of my home weeks earlier.

A Federal Jury later found that RPD officer Nick Joseph violated my civil rights by beating me and falsely arresting me.

After my lawsuit against the City of Rochester and the Rochester Police department, Nick Joseph resigned and was later hired by former Greece, NY Police Chief Merritt Rahn.

Joseph went to work for the GPD, becoming a Sergeant, until in 2008, when he got behind the wheel of his brother's car, high on cocaine and alcohol and driving on interstate 390 North, in excess of 80 miles per hour, crashed into the back of a stalked Venice on the side of the interstate, rupturing a pregnant woman's placenta, forcing her to undergo emergency surgery, delivering her daughter 14 weeks premature.

Nick Joseph was convicted of aggravated vehicular assault, two counts of second-degree assault, leaving the scene of a personal injury accident, and first-degree perjury; as well as two misdemeanors: driving while ability impaired and seventh-degree criminal possession of a controlled substance.

Joseph was sentenced 3 to 7 years in New York State prison.

The investigation into Joseph's incident led to former Greece Police Chief Merritt Rahn also being charged with several felonies in connection with Joseph's hit and run, including guilty of tampering with public records, hindering a prosecution, falsifying business records, falsely reporting an incident, and two counts of official misconduct in an attempt to cover up the Joseph incident.

Merritt Rahn was found guilty of offering a false instrument for filing.

In Rahn's 2009 trial, cell phone records showed several calls made between Joseph and Rahn after Joseph's hit and run.

It is believed that Rahn tried to cover-up for Joseph, including telling Joseph not to immediately go to the hospital for a cut on his forehead which he suffered in the accident, so as to avoid blood tests which would have shown alcohol and cocaine.

Merritt Rahn was convicted and sentenced 1 2/3 to 5 years in New York State prison.

ROCHESTER, NY POLICE DEPARTMENT TACTICAL UNIT. THE MOST CORRUPT DIVISION OF THE RPD.

The Tactical Section, also commonly referred to as the Tactical Unit, or Division, has a long reputation of abusing and beating citizens.

The RPD's Tactical Unit is also known for shaking down drug dealers, often taking cash and drugs from suspects, and keeping the drugs and the money, which officers will then split among themselves,
In fact, many times, Rochester Police Tactical Unit officers will regularly shake down and extort known drug dealers, threatening to arrest and charge dealers if they don't pay officers 'rent'.
The message to drug dealers is clear--if you deal drugs on Rochester streets, you better pay your rent to select RPD cops, especially cops from the Tactical Unit, or be arrested.

On Wednesday night, Pierson was shot after he and his partner Michael DiPaola attempted to stop Thomas Johnson III, who according to Rochester Police was wanted for a parole violation.

Officer Pierson was pronounced dead at Rochester General Hospital an hour after being shot.

Because he wore a uniform?

Because he wore a badge?

The problem is as a society, we are conditioned, and trained by mainstream news media to believe anything they say.

And, when you have a bunch of mainstream news reporters, the majority of which are female, and many of which are in bed with law enforcement officers, and these individuals get on TV, and begin spinning and sensationalizing a story about a cop getting shot on a job which he voluntarily chose, and these reporters instantly label this cop a hero, people believe it.

They instantly buy into the myth that this cop was a hero.

What made him a hero?

"He laid his life down," some will say.

"He died protecting the community," others will say.

"It's such a dangerous job," many will say.

But is it really?

But again, people tend to believe whatever mainstream news media tells them, so they never even question what they hear, and simply believe it.

The truth is that being a police officer is not as dangerous as they want you to believe.

In fact, there are many jobs way more dangerous.

What job can be more dangerous than being a police officer you may ask.

And the most dangerous job?

Wait for it... Fishermen.

Yet you wouldn't call fisherman out on Cape Cod who drowns, while trying to feed his wife and kids a hero would you?

And you wouldn't call a truck driver who loses his life on the road while away from his or her family sometimes for weeks at a time, a hero would you?

But you would call a cop a hero?

First of all we've all seen cops.

Most of them are fit right out of the police academy, then completely let themselves go, racking on the pounds, slamming down donuts, while pounding down cups of coffee.

In fact most cops out on patrol can't even run 20 yards without being out of breath.

And we all know that cops are the biggest gang.

With instant backup, at the touch of a radio click, a fellow gang member, oops, I mean officer is always nearby.

Doesn't sound dangerous to me.

But let's not forget the most important, disturbing fact.

Most police officers DO NOT care about the people in the communities they patrol.

In fact in Rochester, NY, when Brenda Hardaway, a pregnant African-American woman was rammed stomach first into a wooden porch deck railing by a white cop, Rochester Police officer Lucas Krull, who then punched her in the side of her head before throwing her to the ground, do you know what his fellow brothers in blue did the very next day?

Rochester Police officers hung a monkey effigy from their cruiser's mirror and rode around, while RPD supporters posted comments on social media calling Hardaway and her family "porch monkeys."

Not this whole 'hero' thing that the RPD and Rochester's mainstream, or as I like to call them LAMESTREAM news media wants people to believe.

The truth is that the Rochester, NY Police department is one of the most racist and corrupt law enforcement agencies in the country.

The Rochester Police department and U.S. law enforcement profession as a whole has hit an all time record low.

The atrocities committed by cops, many of which are caught on video, are disgusting.

From abusing, beating, and executing innocent people, including the disabled, and mentally ill, or breaking down doors and entering people's homes without warrants and executing their innocent family pets, then laughing about it.

Law enforcement in the U.S. is out of control.

And it will only get worse.

The sad truth is police officers are more interested in profiling, harassing, abusing and killing the very same citizens whom they swore to protect in the oaths they took when they became officers.

Then some cop is shot and killed, and he immediately becomes a hero?

What about all tne countless innocent lives which trigger-happy police officers have taken?

What about the families of those innocent people?

What about their pain, not only of knowing some dirty cop will get away with executing their loved one, but also the pain of seeing mainstream, cop loving news media vilify their loved ones,in order to justify some cop's itchy trigger finger?

What about all the injustices that law enforcement officers committ ever day, and get away with?

But when some cop is killed it's "Stop the presses! A hero has been killed!" ?

And now had will get a presidential-like executive funeral paid for by who else but Rochester, NY and Monroe County, NY taxpayers.

This cop will get a state funeral.

Like somehow a cop's life is worth more than a regular citizen's.

No the fuck it isn't.

FEELING OF ENTITLEMENT EVEN AFTER DEATH.

We all know cops go around feeling a sense of entitlement.

It's that above the law mentality that cops have both on and off the job.

You know, the whole 'Do as I say, not as I do' code that law enforcement ofgicers subscribe to.

It goes with a feeling of superiority.

Cops basically go around not only thinking, but actually believing that they truly are above the law.

Immune from being held accountable to the very same folks who pay their salaries, THE TAXPAYERS.

And this extends even after death.

Take for example the around the clock, 24-hour guard standing watch over Rochester Police officer Daryl Pierson at a Greece, NY funeral home.

Who do you think is paying for that?

The same folks who will pay for his funeral. 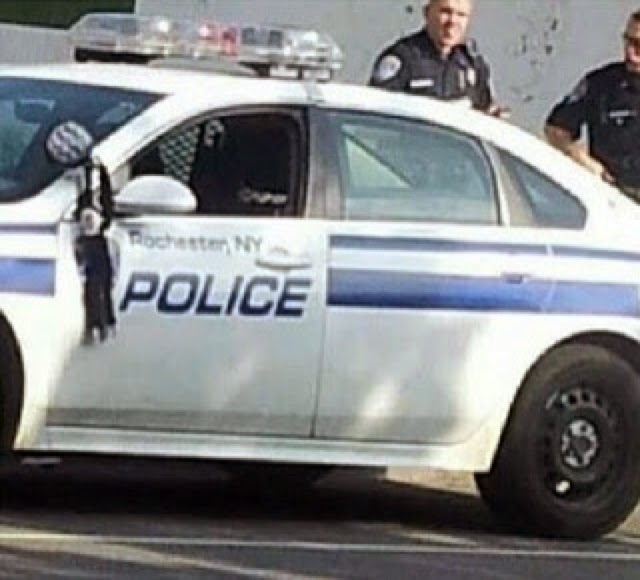 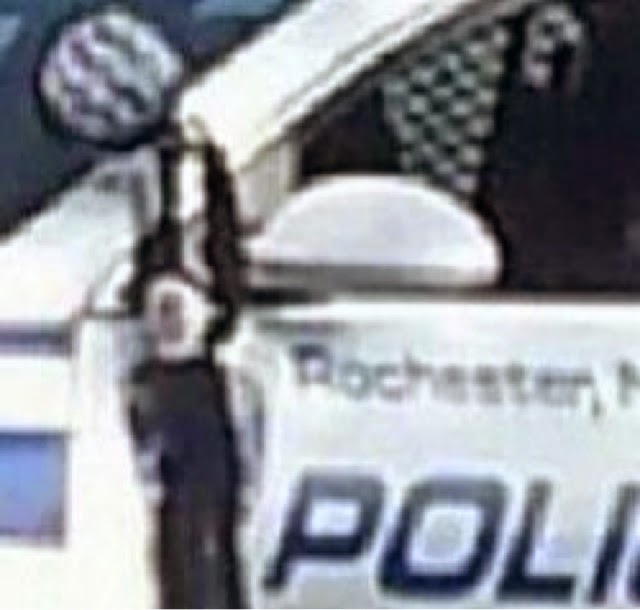 Rochester, NY Police officers drove around with this monkey hanging from their cruiser's mirror.
As Rochester, NY Cops Mourn Loss of One of Their Own, Let's Remember Those Killed by Trigger-Happy RPD Cops.
http://davyv.blogspot.com/2014/09/as-rochester-ny-police-department.html