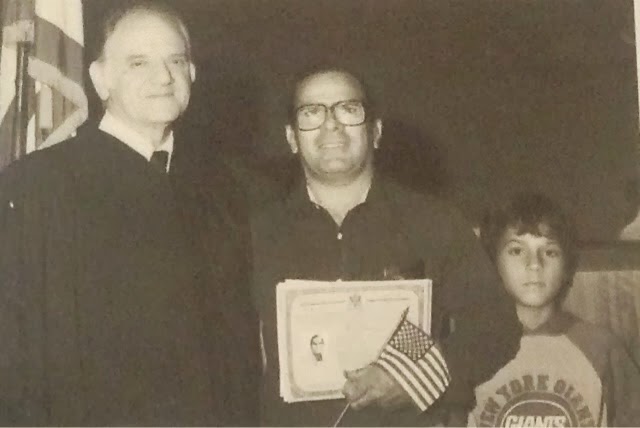 My Dad Mario Vara, (center), myself, and Judge Provenzano
when my Dad became a U.S. citizen.

Not bad for a little blog which began as a simple short article I wrote on knowing your rights when stopped by police.

Twenty one years ago this past July,  I made a promise to my Dad, Mario Vara, as
he lay in his casket.

I promised my Dad that I would continue his work in the fight against police misconduct and corruption, especially when it comes to the Rochester, NY Police department.

And those who know me know that I don't break promises.

My Dad, Mario Vara was a longtime community activist here in Rochester in the fight against police misconduct and corruption.

Having left Cuba in 1968, my Dad knew all too well what it was like to live in a police state where the police could do what they wanted to you, whenever they wanted.

In the early 1980's, my Dad got involved in the community, speaking out on issues such as police brutality.

As a result of my Dad's work, the Rochester, NY Police department made his life miserable.

They would harass and intimidate him every day.

In fact, it got so bad that my Dad fell into a very bad depression, slowly getting worse until he stopped being the energetic and passionate person he was.

On a Friday evening in 1993 my Dad came downstairs and told me he needed to talk to me.

I told him I would be right up.

Within a few minutes I heard a loud bang,

I ran up the stairs to see my Dad laying in a pool of blood.

My Dad had killed himself, committing suicide by shooting himself in the chest with a shotgun.

Over the years I have been falsely arrested and beaten by members of the Rochester Police department.

Like the time in 1997, when former Rochester, NY Police officer Nick Joseph illegally broke into my home with his partner Lamar Cousins, with guns drawn, and pointed at me, assaulted me, handcuffed me, then pushed me face first against his cruiser's open door.

Turns out Nick Joseph had come to my home to retaliate against me, for my having videotaped his brother, David Joseph, now a Sgt. with the RPD's west side division, abusing a Jamaican motorist during a traffic stop.

A Federal Jury later found that RPD officer Nick Joseph violated my civil rights by beating me and falsely arresting me.

Joseph was later hired former Greece, NY Police Chief Merritt Rahn, and went to work for the GPD, when, on 2008, off duty Greece Police Sgt. Nick Joseph got behind the wheel of his brother's car, high on cocaine and alcohol and driving on interstate 390 North, in excess of 80 miles per hour, crashed into the back of a stalked Venice on the side of the interstate, rupturing a pregnant woman's placenta, forcing her to undergo emergency surgery, delivering her daughter 14 weeks premature.

Nick Joseph was convicted of aggravated vehicular assault, two counts of second-degree assault, leaving the scene of a personal injury accident, and first-degree perjury; as well as two misdemeanors: driving while ability impaired and seventh-degree criminal possession of a controlled substance.

Joseph was sentenced 3 to 7 years in New York State prison.

What the Rochester, NY Police department did to my Dad, I will never forget.

I hold a lot of pain inside.

When my Dad's body was being brought out in a body bag, several Rochester, NY Police officers including RPD investigator Lou Aletto laughed, as they smoked cigarettes.

I will never forget that.

I will also never forget how the first five peolle to attend my Dad's wake were RPD members.

They were good friends of my Dad's.

I will never forget seeing the tears in Rochester, NY Police officer Ron Fontaine's eyes well up, as he hugged me, my brother and my mom, and told us "Mario was a good man."

I will never forget that.

My work has reached a level I never really imagined.

In the last year, this blog has reached an international audience.

Australia, Europe or Asia, people in countries I may never visit in my life are reading this blog.

If just one of those readers is inspired and motivated to get involved, to denounce police misconduct, in his or her own city or town, and to video record ANY and ALL interactions with police, then my passion and activism has not been in vain.

I'm far from being done.

In fact, despite my 20-year activisim against police misconduct and corruption, I feel as passionate as the day I started.

And there's alot more to come.

Including my film, 'A Promise to My Dad' which will chronicle my Dad's life and work including his passion and love for this country, as well as my continuation of that work, through the promise I made to him.

I want to take a moment here to thank everyone who has supported me and my work.

I can't express in words alone just how much it means to have people send me emails and messages expressing their support.

I can't express in words alone how much it means when people stop me in public simply to say thank you for what I do.

I'd like to thank my good friend Steve Maile who has always been there for me.

I also want to thank my friend Alex Salazar, a former L.A.P.D. officer who realized that he could no longer be part of the  'Thin Blue Line' and 'Code of Silence' which police officers subscribe to, so he decided to instead dedicate his life to exposing police misconduct.

I'd be lying if I said this is easy.

In fact it's very lonely road.

Let's just say that over the last several years I have realized who is a friend and who never was.

A lot of people I thought truly cared about me have alienated themselves from me as a result of my activism.

I'd be lying if I said it doesn't hurt.

Some days are very dark.

But those are the days when I remember my Dad's passion to fight injustices such as police misconduct and corruption.

I miss my Dad everyday.

Even as an adult, it's amazing just how much I have needed my Dad in my life over these last 21 years.

I'd give anything to be able to see him and tell him I love him so much.

I'd give anything to be able to see him and tell him how much he meant to me and how proud I was of him.

I love you pops.

Here I am, keeping my promise to you.

And we're just getting started.

Please Support My Film 'A Promise to My Dad'
'A Promise To My Dad' is a documentary film about a promise I made to my father at his wake, after he committed suicide.
The short film will explore my dad  Mario Vara's life as he leaves Cuba with my mom and my brother in 1968, in search of freedom and a better life for his family.
After moving to Rochester, NY, my dad realized that despite the promises of freedom and liberty that a life in America held, the harsh reality is that there are also many injustices as well.
In fact, my Dad will soon face very similar 'police state' tactics, as the ones he escaped his homeland for in the first place.
'A Promise to My Dad' highlights an incident in the 1980's, when Rochester, NY Police officers Mark Mariano and Randall Benjamin kicked down our home's front door, and illegally entered out home, terrorizing our family at gunpoint, even threatening to shoot our dog.
As a result of this incident. my father Mario Vara became outspoken against police abuse and misconduct.
Unlike many Americans who take their rights for granted, my Dad took a stand to denounce law enforcement violating U.S. citizen's civil rights.
Having lived a communist dictatorship, my father knew all too well what it was like to live in a totalitarian police state, where simply expressing one's dislike for Castro and his government could land you in prison.
My Dad was passionate in his denouncement of rogue cops abusing and violating citizen's civil rights in the U.S.
As a teen. I would tag along with my Dad and accompany him to community meetings, rallies, and marches where my Dad demanded accountability from those whose job is to serve and protect, as well as the elected officials whose job it is to keep them in check.
'A Promise To My Dad' features me telling my Dad's story, including talking about my father's depression and how it led to my father committing suicide in 1993.
'A Promise to My Dad' follows me as I struggle to keep the promise I made to my father to continue his work against police misconduct and corruption, while at the same time trying to find my own identity as a young man, then as a father myself.
Throughout the film I will confront my own struggles with depression, my father's suicide, and the effects that my work has brought to me and my family, including my children having received death threats.
One example of this came in August of 2014, when an ex-con who is known to work with the Rochester Police Department, as a paid confidential informant (C.I.) was captured on a store's surveillance video threatening to murder, and decapitate my 5-year old daughter.
Despite the video clearly showing the individual threatening to kill and decapitate an innocent child, Rochester Police and the Monroe County, NY District Attorney's office refused to charge the individual.
Please support my film "A Promise to My Dad" by making a donation.
It's easy to do.
Click on the 'Donate' icon located at the top right of this page and follow the easy steps.
All donations are secure through PayPal.
Any donation over $35.00 receives a free 'A Promise to My Dad' t-shirt.
Just be sure to include your address when making your donation.
Thank you.