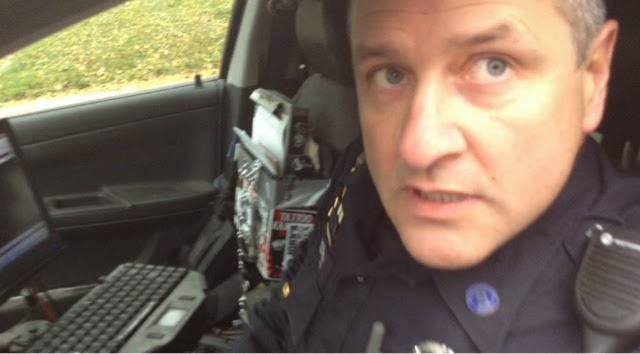 Rochester, NY Police K-9 officer Cuyler Mooney, badge # 871, would have had no problem fitting right in Adolf Hiler's Nazi Germany with his 'Nothing to see here, keep it moving' Gestapo-like behavior.

The first occurred around 3:45 p.m., when I came across several Rochester, NY Police officers harassing an innocent African-American motorist who was getting gasoline on the corner of Bufalo Rd. and Glide Street.

As you can see in the video below (Part 1), Rochester cops surrounded the man at the gas pump, questioning the man.

Like I always tell people to do, I immediately began video recording and documenting the incident.

When the RPD cops were done harassing the motorist,  I asked Rochester, NY Police officer Matthew Klinkman, badge # 326, why he and his fellow officers questioned the man.

As you can see at the end of the video, officer Klinkman refused to answer, and drove off on me, but not before giving me his badge number, and name, after it asked him for them.

Afterwards, I interviewed the motorist, Trevor, in a short video, (Part 2 below).

The man was very appreciative that I had video recorded the incident.

Not even 10 minutes after I left that location, I came across a second traffic stop, in the 100 block of Chili Avenue, which is less than a mile from the first location.

This time a total of 5 Rochester Police cruisers had pulled over another African-American motorist.

"I'm doing my job, get out of my way!", officer Mooney yells at me, over the loud barks of his K-9 partner "Bandit", after I ask him for his badge number.

By officer Mooney's response, becoming irate when I asked him for his badge number, it is clear that  like most Rochester Police officers, officer Mooney doesn't believe that as a public servant it is not only his duty, but his obligation, to be accountable, again, to the very same individuals who pay his salary--THE TAXPAYERS.

Also be sure to check out Rochester Police Sgt. Bello's refusal to answer my questions.

Check out officer Glynn, as he is unable to control his nervous laughter, towards the end of the Part 3 video.

And to think, these are the individuals entrusted to 'Serve and Protect'?