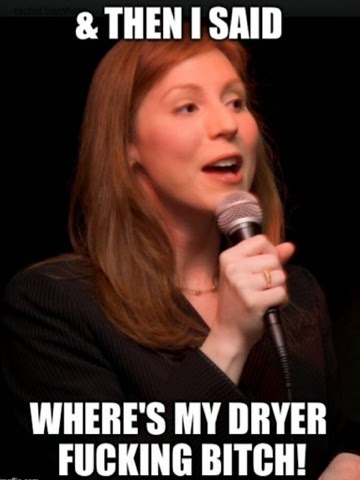 Rochester, NY WROC News 8 Reporter Rachel Barnhart
in one of the best memes I've ever seen!
Meme Credit: Twitter user @JezbeltheNun
By Davy V.
Almost exactly a year to the date (a year and 15 days to be exact) after Rochester, NY television news reporter Rachel Barnhart went on a social media rant about coffee, after a local Rochester coffee shop owner opened his shop a little late because of a snow storm, Barnhart is at it again.
Except this time her rant is not about coffee.
It's about a dryer.
Yes.
A dryer.
Apparently Barnhart purchased a dryer from Best Buy.
And when she didn't receive the dryer, she went on an angry rant.
Now even though Rachel Barnhart's tweets, which you  can see in the screen shots below, aren't really bad, it's what a Best Buy employee said Barnhart said to her, which is not only disturbing, but disgusting.
According to the Best Buy employee who works at Best Buy's customer relations center, and who asked me not to publish her name, Rachel Barnhart "was acting like a crazy woman."
"She was yelling and screaming at me and she was acting like a crazy woman and wouldn't let me get in a word," said the young woman.
But it's what the employee says happened next, that she says she still can't believe.
"I told her I was going to put her on hold because I was trying to see if there was any way that the dryer was in stock, but I didn't actually put her on hold, I just wasn't talking and that's when she yelled 'fucking bitch!", the employee said.
"I then told her that her behavior was uncalled for, I mean I have had all kinds of calls but no one has ever called me the b word."
The employee went on to tell me that Rachel Barnhart called the customer service center several times .
"She called several times over and over again and was extremely rude each time," adding, "She was out of control.
Rachel Barnhart's Twitter rant. 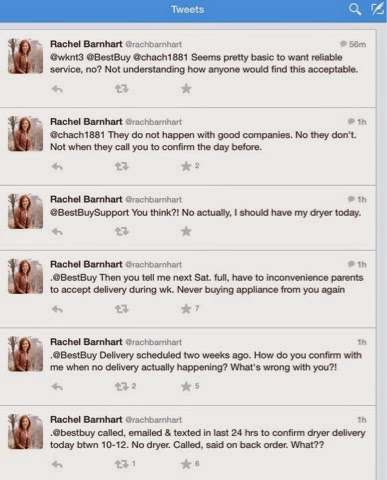 I have seen a lot of memes, but I have to admit, this one created by
Twitter user @JesbelltheNun takes the prize!

Click link below to read my piece on Rachel Barnhart's Twiiter rant about
coffee last March.
http://www.davyv.blogspot.com/2014/03/rochester-ny-news-8-television-reporter.html
Follow me on twitter
https://twitter.com/davyvara
Posted by Davy V. at 10:18 AM