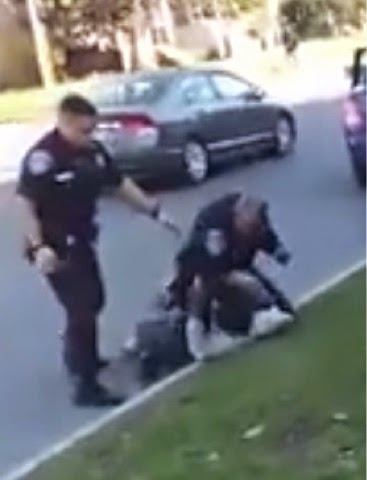 Black Rochester, NY Police beats black man.
Updated Tuesday May 12, 2015
By Davy V.
Rochester, NY Police Chief Michael Ciminelli says he sees nothing wrong with a black suspect being punched  in the face, beaten, and body slammed into a hard concrete curb by a Rochester, NY Police officer on April 26, 2015.
Some of you may remember my original piece on this disturbing incident which was captured on video.
(My original piece is below)
"I can look anybody anybody in the eye and say this was proper within policy within training use of force and we're comfortable with it," Chief Ciminelli said.
According to Ciminelli, a 911 call came in for a report of a group fighting.
Ciminelli said 17-year old Darvan Harring was armed, showed police his gun, then resisted arrest and even tried to bite a police officer.
"He took his hand brought it up to his mouth and he actually bit the officer," RPD Sgt. Henry Favor said.
"The bite, you can't really see it from the video, but it caused bleeding, medical treatment.
Sgt. Favor says the video shows the 17-year old assaulting the officer.
Really?
Hmm...
I don't see that.
What I see is a young black man beating beaten and abused by a black cop.
A black cop who slams the young man's back so hard against the curb that he could have easily paralyzed him.
Sgt. Favor who interestingly enough, just happens to have trained the officer who is seen beating the young man, said that the suspect was trying to escape.
"He does not want to go to jail, he's trying to get away," Sgt. Favor said.
Really?
Hmm...
I don't see that either. 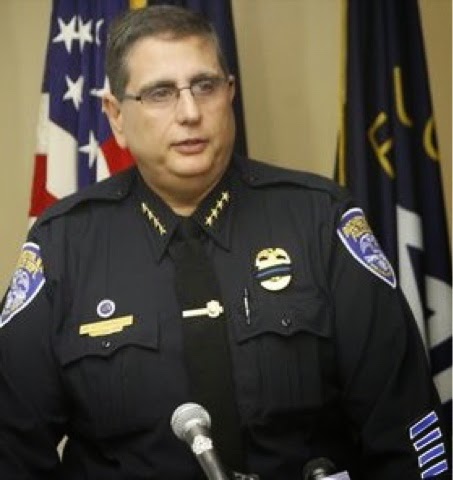 Rochester, NY Police Chief Michael Ciminelli
My original piece:
By Davy V.
A video posted on Facebook shows a Rochester, NY Police officer punching a black man in the face, then seconds later, the same officer slams the man's back against the hard and sharp edge of a cement street curb.
In the video, a woman in the background can be heard saying "That wasn't even fucking necessary " referring to the man being punched by the RPD officer.
The woman then says; "I seen it all, a black cop punched him," referring to a black Rochester Police officer who beats the black man.
Like Ice Cube said on N.W.A.'s hit song, Fuck Tha Police, "Black police showing out for the white cop,"
In the video, someone can also be heard telling the man, "Do not allow them to shoot you!"
The incident happened Saturday on Genesee Street, on Rochester's west side.
There is no more information available at this time as to why police stopped the man, who is seen handcuffed at the end of the video, being walked to a Rochester Police cruiser.
I will be updating this piece of more information becomes available.
Click link below to watch video.
http://youtu.be/CUFFnKBo3PQ
PLEASE SUPPORT MY FILM "A PROMISE TO MY DAD"

That's me on the right with my dad Mario Vara, and Judge Provenzano
when my dad became a U.S. citizen.
For the past 20 years my work has centered around exposing police misconduct and corruption.
Most recently, I exposed an Irondequoit, NY Police Detective, Jim Frascati, for posting disturbing racist posts on social media against African-Americans and Mexicans.
As a result of my exposing Detective Frascati right here on this blog, he was fired, and a 911 Deputy Director was suspended without pay after he also posted racist comments on Detective Frascati's original post.
As an activist, my goal is to put a spotlight on incidents which mainstream news media often ignores.
So why do I do this, you may ask?
Well, my story begins as the son of a Cuban immigrant, who left his homeland in search of a better life for his family.
And it's that story, my Dad's story, which I want to tell through my film, "A Promise to My Dad."
But I can't do it alone.
I need your help.
'A Promise To My Dad' is a documentary film about a promise I made to my father at his wake, after my father committed suicide.
The short film explores the life of my dad, Mario Vara  as he leaves Cuba with my mom and older brother in 1968, in search of freedom and a better life for our family.
After moving the family to Rochester, NY, my father realizes that despite the promises of freedom and liberty that a life in America can bring, the harsh reality is that there are many injustices as well.
In fact, my dad would soon face very similar 'police state' tactics, as the ones he escaped his homeland for in the first place.
"A Promise to My Dad" highlights an incident in the 1980's, when Rochester Police officers Mark Mariano and Randall Benjamin kicked down the family's door, illegally entering our home, terrorizing me and my family at gunpoint.
As a result of that incident, my dad becomes outspoken against police abuse and misconduct.
Unlike many Americans who take their rights for granted, my dad took a stand to denounce law enforcement violating U.S. citizen's civil rights.
Having lived a communist dictatorship, my dad knew all too well what it was like to live in a totalitarian police state, where simply expressing one's dislike for Castro and his government could land you in prison.
My dad was passionate in his denouncement of rogue cops abusing and violating citizen's civil rights in the U.S.
As a teen, I would tag  along with my dad accompanying him to community meetings, rallies, and marches where he, along with other citizens demanded accountability from those whose job is to serve and protect, as well as the elected officials whose job it is to keep them in check.
'A Promise To My Dad' features me telling my dad's story, including talking about my father's depression and how it led to him committing suicide in 1993, after the Rochester, NY Police Department targeted my father through a series of selective harassment and intimidation tactics.
'A Promise to My Dad' follows me as I struggle to keep the promise I made to my dad, to continue his work against police misconduct and corruption, while at the same time trying to find my own identity as a young man, then as a father myself.
Throughout the film I will talk about my own struggles with depression, my father's suicide, and the effects that my work has brought to me and my family, including my children being stalked and receiving death threats.
One example of this came in August of 2014, when an ex-con who is known to work with Rochester Police as a paid confidential informant (C.I.) was captured on a store's surveillance video threatening to murder, and decapitate my 5-year old daughter.
Despite the video clearly showing the individual threatening to kill and decapitate an innocent child, Rochester Police and the Monroe County, NY District Attorney's office, including D.A. Sandra Doorley, refused to charge the individual.
Please support my film "A Promise to My Dad" by making a donation.
Making a donation is easy.
Just click on the link below which will take you to my blog.
Once there, click on the 'Donate' icon located at the top right of the page and follow the easy steps.
All donations are secure through PayPal.
Any donation over $35.00 receives a free 'A Promise to My Dad' t-shirt.
Just be sure to include your address when making your donation.
Click link below:
http://davyv.blogspot.com/2013/09/a-promise-to-my-dad-will-tell-my-dads.html
Follow me on twitter
https://twitter.com/davyvara
Posted by Davy V. at 4:02 AM