African-Americans; This 4th of July, Remember Frederick Douglass's Words; "There is not a nation on earth guilty of practices, more shocking and bloody than are the people of these United States, at this very hour." 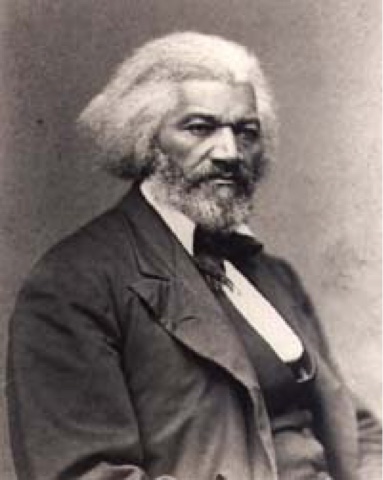 Frederick Douglass
By Davy V.
What Would Frederick Douglass Do?
I often find myself asking that question.
Fredrerick Douglass is one of my heroes.
Born into slavery, Frederick Douglass taught himself how to read and write, and eventually escaped from his white slave master, going on to become the father of the civil rights movement.
The fact that Frederick Douglass founded The North Star anti-slavery newspaper in my hometown of Rochester, NY, and is buried in Rochester's historic Mount Hope Cemetery, makes Douglass, his life and his work that much more special to me.
But there's a crisis happening in my city of Rochester, NY.
When it comes to Rochester's African-American community, there's no unity.
No leaders.
In a city with such a rich history of civil rights struggles and contributions, from Frederick Douglass, to Elizabeth Cady Stanton, to Susan B. Anthony, Rochester's African-American community is complacent.
Complacent and comfortable.
Whether it's the no snitching code which many inner city blacks subscribe to where they wouldn't turn in cold blooded killers who have murdered black youths over a pair of sneakers, or the 'if it doesn't affect me or mines, I don't want to know anything" mindset, black folks just don't care.
Rochester's black communit simply doesn't care when it comes to issues affecting them such as racial profiling, abuse, misconduct and corruption on behalf of the Rochester, NY Police Department, a police force with a long history of abusing and executing blacks in Rochester, including many who have been unarmed.
Rochester's African-American community, especially the youth, are more interested in committing genocide, killing each other, and video recording the next viral video of them fighting each other inside Rochester's new $50 plus million dollar transit station, than they are in coming together and denouncing the injustices and socioeconomic issues which plague the black community in Rochester.
Combine that with the fact that Rochester, NY is ranked the 5th poorest city in the U.S., and that Rochester's child poverty rate is 46 percent, more than double the national average of 20 percent, and the fact that many black men are absent in the raising of their children, and there seems to be little hope for Rochester's black community.
In Rochester, and I suspect throughout the U.S., the majority of African-Americans are distracted.
Distracted from the real issues.
Complacent and comfortable.
So I think it's fitting that on the Fourth of July, when thousands of African-Americans in Rochester,and  millions more throughout the U.S. will gather at family cookouts, and get-togethers, celebrating the 4th, that they should be reminded of what the Fourth of July really means, to black folks.
And who better to remind them, than my heroe, Frederick Douglass.
On July 5th 1852, Frederick Douglass delivered his speech,, "What To The Slave is The Fourth of July?", in Rochester, NY.
While you can read Douglass's lengthy speech for yourself, below I have included an excerpt from that powerful speech.
An excerpt which sums up what the 4th of July represents.
Here it is.
"What to the American slave is your 4th of July? I answer: a day that reveals to him, more than all other days in the year, the gross injustice and cruelty to which he is the constant victims. To him, your celebration is a sham; your boasted liberty, an unholy license; your national greatness, swelling vanity; your sounds of rejoicing are empty and heartless; your denunciations of tyrants, brass fronted impudence; your shouts of liberty and equality, hollow mockery; your prayers and hymns, your sermons and thanksgivings, with all your religious parade, and solemnity, are, to him, mere bombast, fraud, deception, impiety, and hypocrisy--a thin veil to cover up crimes which would disgrace a nation of savages. There is not a nation on earth guilty of practices, more shocking and bloody than are the people of these United States, at this very hour."
So I ask, What Would Frederick Douglass Do?
What would he do about the state of the African-American community in Rochester, NY and through the the U.S.?
What would he do about black youth killing each other?
Committing genocide against their own brothers and sisters?
What would Frederick Douglass do about the complacency within the black community?
What would Frederick Douglass do if he saw how black folks celebrate the 4th of July, having no idea, or simply not caring about what the 4th really means?
Now some, perhaps many, will argue that a lot has changed since Frederick Douglass spoke those words.
Has it really?
CLICK LINK BELOW TO READ FREDERICK DOUGLASS'S ENTIRE "What to The Slave is The Fourth of July?" SPEECH.
http://www.pbs.org/wgbh/aia/part4/4h2927t.html
Follow me on twitter
https://twitter.com/davyvara
Posted by Davy V. at 4:46 PM