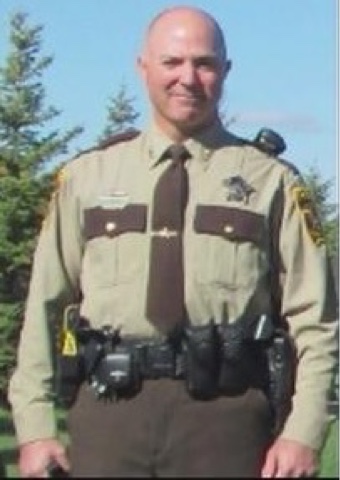 In yet another example of how some law enforcement officers abuse and mistreat their 4-legged partners, a Ramsey County, Minesota Sheriff's Deputy was captured on a casino's video surveillance system abusing his K-9 partner.

Ramsey County, Minnesota Sheriff's Deputy Brett A. Berry, 47 was staying at Black Bear Casino and Resort on June 15th with a group of deputies as part of their K-9 certification, when security asked that he leave the premises after several customers complained that he had made unwanted advances on them.

As Black Bear security followed Deputy Berry on their surveillance cameras around 3 a.m., they observed Deputy Berry returning to his hotel room, then walking on the casino's parking lot with his K-9 partner.

That's when security observed an irate Deputy Berry yelling at his K-9, then picking his partner up and slamming the dog to the pavement.

The terrified K-9 then ran away from Deputy Berry, and into the resort's lobby vestibule, where the dog became stuck between the doors.

According to the criminal complaint against Berry, the Deputy then beats the dog on its ribs and shoulders.

Berry was charged with animal cruelty as well as assaulting a public safety dog.

The K-9, who according to Ramsey County Sheriff's officials was taken from Deputy Berry, was treated at a local veterinarian.

"We hold our staff to the highest standards, amd the Ramsey County Sheriff's Office is troubled by these allegations."

This isn't the first time that Deputy Ramsey has been in trouble.

In 2007, Deputy Berry received a "poor public relations" complaint in his file.

And this incident involving Deputy Berry marks the third time this month where a Ramsey County Sheriff's Deputy is investigated for wrongdoing and official misconduct.