Pinellas County, Florida official Harasses Black Man BBQ'ing in His Own Yard; "I Can Smell it Again Right Now... I Saw Smoke... Leaving Your Property." 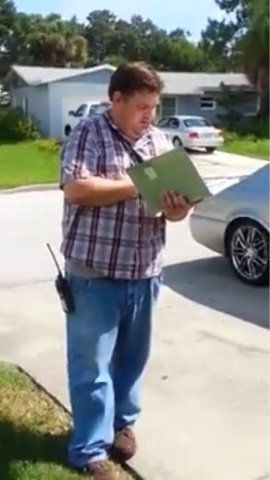 PLEASE CHECK OUT AND SUPPORT MY FILM, "A PROMISE TO MY DAD" BY CLICKING LINK BELOW

Before barbecuing in Pinellas County, Florida, you may want to make a list:

If you're BBQ'ing in Pinellas County, Florida, you really will need #6.

He's the Pinellas County man whose video showing an "environmental specialist" harassing him over BBQ'ing in his own yard, has racked up more than 2 Million views on YouTube.

Scotty Jordan was throwing down on his grill when Pinellas County Florida official Joe Graham walks on his property, with a walkie talkie hanging off his jean's pocket, and what appears to be some sort of notebook in his hand.

The video begins with Graham reading off what appears to be some sort of county code.

Something about smoke and odors emitted from neighborhood residents' barbecue grills, crossing over property lines.

This is in Pinellas County, Florida.

"I can smell it again right now," the Pinellas County official is seen in the video telling Jordan.

"I saw smoke... leaving your property... You're allowed to have it smell on your property, so that doesn't count, but when I'm on the street, that's when it counts."

Jordan and another the camera man's reaction to the gestapoish Pinellas County official is priceless.

"So we're supposed to control the smoke and the wind and where it's blowing?"

Apparently so, of you live in Pinellas County, Florida.

Or if YOU ARE BLACK and live in Pinellas County, Florida.

And then, as if it couldn't get any worse, the BBQ Cop tells the men that they should align their BBQ in accordance with wind patterns.

Check out the video for yourself.

The only tip I have for the cameraman is next time, DO NOT record while holding your phone vertically.

That's one of my biggest pet peeves.

By recording holding your hone vertically, you're cheating yourself, and the viewers out of two thirds of the picture.

ALWAYS record holding your cell phone in a horizontal position.

PLEASE SUPPORT MY FILM, A PROMISE TO MY DAD BY CLICKING LINK BELOW