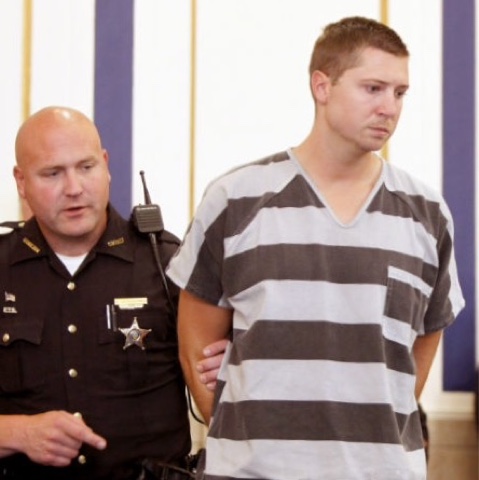 Ray Tessing at his arraignment
By Davy V.
A video posted to YouTube shows Ray Tensing, the Cincinatti University Police officer charged with murder after shooting an unarmed black man to death, conducting an illegal traffic stop of two men, and violating their civil rights.
The 2014 incident is especially disturbing and eerie to watch, given what we know now about how Tensing executed Sam Duboise. in what Cincinatti prosecuting attorney Joseph T. Deters called a "senseless, asinine shooting."
Tensing stopped Duboise on July 19th for allegedly not having a front plate on his Honda Accord.
Ray Tensing then tries to open Duboise's driver's door.
A few seconds later Tensing shoots the 43-year old Duboise in the head at point blank range.
Then, in an attempt to justify his executing an innocent, unarmed black man, Tensing lied, claiming
that he was dragged by Duboise' car.
But Tensing's own body can video tells a different story.
Condeming Tensing's actions, Deters said the video is crucial evidence, as it shows that Sam Duboise was not aggressive in any way, and never posed a threat to Tensing.
"It was a senseless, asinine shooting," Deters said, adding "This doesn't happen in the United States, ok?"
"This might happen in Afghanistan, people don't get shot for a traffic stop."
In the 2014 video, Ray Tensing, in an eerily similar fashion, orders the men out of their vehicle, for no reason.
Check out the video below.
As far as Cincinatti prosecuting attorney Joseph T. Deters, while I applaud his denouncing Sam Duboise's execution by yet another trigger-happy cop, he's wrong.
Yes Mr. Deters.
This is the United States.
And people do get shot, AND KILLED for a traffic stop.
Especially when they're black.
Click link below to watch video of Ray Tensing's 2014 video.
http://youtu.be/Zt3sYSoV23g
Click link below to watch video of Sam Duboise shooting.
WARNING: GRAPHIC
http://youtu.be/hxeURRTriYo

PLEASE SUPPORT MY FILM, A PROMISE TO MY DAD BY CLICKING LINK BELOW