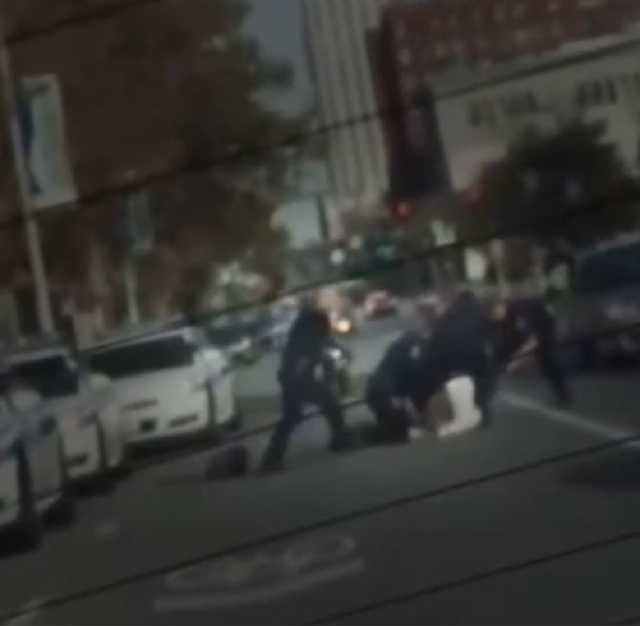 Rochester, NY Cops Beat Mentally ill Homeless Man
By Davy V.
A disturbing video, filmed through a car's rear window, and reminiscent of the 1991 Rodney King beating by LAPD cops, shows 5 Rochester, NY Police officers beating a black mentally ill homeless man in the middle of the street.
Perhaps even more disturbing is the fact that the beating took place directly in front of a homeless shelter, after staff called the police on the man saying he dent want to leave.
According to Rochester Police, who acknowledged that the man was mentally ill, officers responded to The Open Door Mission homeless shelter, located at 210 West Main Street, in downtown Rochester, around 3:00 pm Tuesday afternoon.
It was then that RPD officials say officers found the homeless man in the street, blocking traffic, and as they said, behaving in a manner where he could have hurt himself.
So what did they do?
Well, they did what jacked-up, steroid shooting thugs with badges do.
They beat the man.
After tasering him several times, according to RPD Chief Michael Ciminelli.
Never mind that the man was mentally ill.
And never mind that he may have hurt himself.
These Rochester cops did it for him.
The Rochester, NY Police Department has a long history of mistreating and abusing the mentally ill.
One case that stands out which I covered is that of LaShedica Mason.
On July 10, 2005, 13-year old LaShedica Mason was suicidal, when she locked herself up in the bathroom of her home on St. Jacob Street on Rochester's eastside.
Her relatives called 911 for assistance.

Minutes later, Rochester Police officer Mark Simmons entered the home and as soon as he saw Mason holding a knife, he shot the 13 year old girl three times, including once in her abdomen.
LaShedica almost died.
Her gall bladder, as well as several feet of her intestines had to be removed during surgery.

Ironically, just days before the shooting, former Rochester, NY Police Chief Cedric Alexander had announced the creation of the Rochester Police Department's Emotionally Disturbed Persons Response Team (EDPRT) a team specially trained to deal with despondent, suicidal, and emotionally unstable individuals.
Which is why I'm disgusted every time I see Cedric Alexander on CNN, talking about black lives matter.
Cedric Alexander is a hypocrite.
He never denounced the shooting, amd stood by his cop's actions.
LaShedica was black.
Didn't her life matter when a trigger-happy cop shot her several times?
That's why I'm not surprised that these 5 Rochester, NY cops beat a black mentally ill homeless man in broad daylight in downtown Rochester in the middle of a busy street.
How sad that this took place in a city with so much civil rights history.
A city where Frederick Douglass, known as "The Founding Father of America's Civil Rights Movement" started The North Star anti-slavery newspaper, and is actually buried less than 2 miles from where this beating took place.
Also sad is just how silent Rochester's black community and so-called "leaders" have remained following the beating.
Not a peep.
CLICK ON LINK BELOW TO PLAY VIDEO
http://youtu.be/y6XPAPKYy0E
Follow me on twitter
https://twitter.com/davyvara
"Like" and Follow me on Facebook
https://www.facebook.com/davyvara
Posted by Davy V. at 6:52 PM