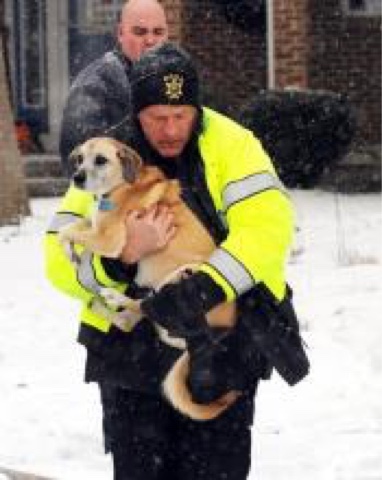 Ontario County, NY Sheriff Deputy Bob Holland held rescue dog from fire
By Davy V.
Contrary to the popular stereotype that men don't like to admit when they're lost and hate asking for directions, I'm different.
I'm not too proud to admit I'm lost, or ask for directions.
But I will admit, that on my short list of asking someone for directions, "police officer" wouldn't normally make the cut.
Also contrary to the popular belief that I hate cops, I don't.
But what Rochester, NY Police officers Randall "Rambo" Benjamin and Mark Mariano did to me and my family when I was 16 years old, kicking in our front door, illegally entering and searching our home without a warrant, overturning mattresses and drawers,, smashing my baseball and football trophies, and terrorizing us at gunpoint, while jacking me up against a wall, and threatening to shoot our dog, kind of ruined the whole "Police are your friends, and you should look for a police officer if you're ever lost or need help" propaganda that I was taught at an early age when "Officer Friendly" visited my 3rd grade class.
So, normally I wouldn't approach, let alone seek out a police officer if I'm lost.
Enter Ontario County, NY Sheriff's Deputy Bob Holland.
(I know, but there was no one around, and I was really lost.)
After about 15 minutes of traveling more than 10 miles off course, somewhere past Victor, NY in Ontario County, I had two choices.
One, ask a cop sitting in his car.
Or, two, continue to be lost.
I asked the cop sitting in his car.
Deputy Bob Holland exited his cruiser as I pulled up along side of him.
Very professional and mild mannered he greeted me with a "How can I help you?"
After giving me directions on how to get back on track to my destination, and then repeating them a second time, Deputy Holland recognized me.
I thanked him for his professionalism, and his overall service with a smile, and I told him that I'm not used to having positive interactions with law enforcement.
I briefly told him about my dad, and what he went through with the Rochester, NY Police Department, and their selective targetted intimidation and retaliation tactics against my father, as a result of his activism work.
I explained to Deputy Holland that what the Rochester, NY Police Department did to my dad, ultimately  led to him committing suicide.
And Deputy Holland apologized.
He said "I'm sorry."
"I'm sorry."
Something the Rochester, NY Police Department has never said to me or my family.
Two simple, yet very powerful words when combined.
Two simple, yet very powerful words coming from a cop who I've never met.
A cop who aside from recognizing me and knowing who I am, has never hurt me or my family.
And yet he apologized,
I thanked Deputy Holland again, and was off on my way.
But the story doesn't stop there.
It gets better.
A short time later, as I sat down to write something special about Deputy Holland, I decided to do a quick Google search with his name.
I'm so glad I did.
You see, as it turns out, Ontario County, NY Sheriff Deputy Bob Holland is more than just a nice cop.
He's a true hero.
On January 26, 2015, shortly after 1 pm, Victor and Farmington, NY Fire Departments responded to a call for three family structures on fire on Calm Lake Drive in the town of Farmingtn, NY.
While no one died in the serious fires, two cats lost their lives.
But one beautiful pet dog made it out alive, thanks in part to Ontario County, NY Sheriff's Deputy Bob Holland.
And that right there made my day.
To read that the cop who I asked for directions, is also a hero.
A hero with a soft spot for an innocent animal.
A scared dog, who was trapped in a burning home.
And coming just a few days after my piece on a Florida City cop who executed an innocent dog named "Dutchess", shooting her three times in the head in front of an 8-year old boy, it's a pleasure to write a feel good story about a nice cop who is also a true hero.
Thank you Deputy Holland.
PLEASE CLICK THE LINK BELOW TO SUPPORT MY FILM, A PROMISE TO MY DAD
www.gofundme.com/APromiseToMyDad
Follow me on twitter
https://twitter.com/davyvara
"Like" and Follow me on Facebook
https://www.facebook.com/davyvara
Posted by Davy V. at 9:12 AM