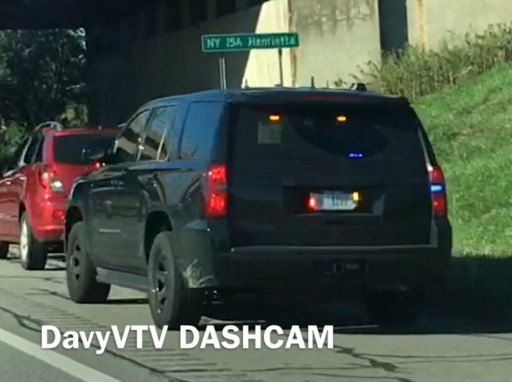 Monday morning I took a drive down to the New York State Troop E Barracks in Rochester, NY.

The NYSP Troop E barracks, located on Scottsville Rd., right behind the Greater Rochester airport, is the same barracks which is using unmarked police vehicles to pull over motorists for traffic violations, such Elaine Capriccio, who was pulled over recently near Rochester, NY, after being followed for several miles.

At first Capriccio didn't know who was following her since the unmarked Chevy Tahoe being used by the NYSP, had no markings identifying it as a police vehicle.

You can read my full story below.

Also, as you can see in the video below, Monday I spoke with New York State Trooper Finney.

I want to say something.

Again, there's been some incidents, of course, but my point is that the New York State Police is usually more professional than other city and town law enforcement  agencies.

In fact, the New York State Police has investigated incidents of misconduct and corruption involving other police agencies.

In the Rochester area, the New York State Police was involved in a high profile corruption scandal involving the Greece, NY Police Department in 2008.

That's when former Greece, NY Police Sgt. Nick Joseph rear ended a stalled vehicle with a pregnant woman inside, nearly killing her, her unborn child, and her boyfriend.

Sgt. Joseph, who was high on cocaine as well as drunk, fled like a coward, but was later arrested, charged, and convicted, thanks in large part to a great investigation by the New York State Police.

Back to Troop E barracks.

In the video below, I ask a very professional and courteous Trooper Feeney about the use of unmarked vehicles. READ MY ORIGINAL STORY BELOW

Elaine Capriccio had no idea who was following her closely behind on Interstate 390 near Rochester, NY last month after getting on the highway when she got out of work around 11:30 p.m
The mother of two young children was so scared that she called her husband.
"I didn't know what to do," Capriccio told me during a recent phone interview.
"I mean all of a sudden I see this big black truck with tinted windows and it just came out of nowhere, and followed me for at least two, maybe three miles."
"My husband told me to hang up and call 911."
And that's exactly what she did.
But what Capriccio didn't know was that she was in for a big surprise.
"I'm on the phone with 911 and I'm looking in my rear view mirror and it was then that I see police lights not on top like a normal police cruiser, but instead like hidden away inside the grill of the truck."
Capriccio proceeded to tell the 911 operator about the lights, and also where she was.
"Ma'm, you're being pulled over by a New York State trooper."
"That's exactly what she told me," Capriccio said.
The 911 operator was right.
All along Capriccio was being followed and eventually pulled over by a New York State trooper.
"The trooper asked me if I had had anything to drink," Capriccio said.
"I told him absolutely not I just got out of work, and that was it, he told me to have a goodnight."
On April 17, 1996, New York State Governor George Pataki issued an executive order ending the practice of law enforcement agencies using undercover, unmarked police vehicles to pull over motorists for traffic violations.
Pataki's executive order was prompted by innocent motorists being targeted by criminals driving private vehicles, impersonating law enforcement officers. 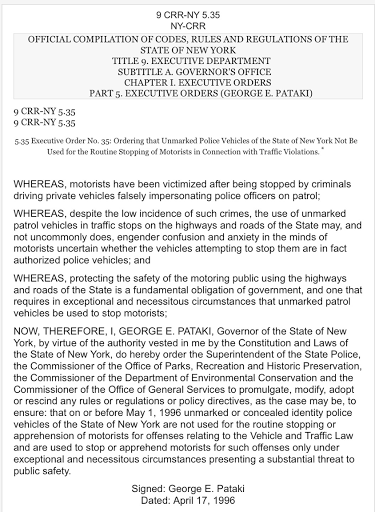 New York Governor George Pataki's Executive Order Banning Law Enforcement Officers From Using Unmarked Vehicles to Pull Motorists Over
But that all changed in 2008 when then New York State Governor David Paterson lifted the ban, once again allowing New York State law enforcement agencies to use unmarked vehicles to pull motorists over.
And as a result, once again putting the lives of innocent citizens at risk of being targeted by criminals.
All in order to generate more revenue for the state.
There you have it, New York State taxpayer dollars at work. 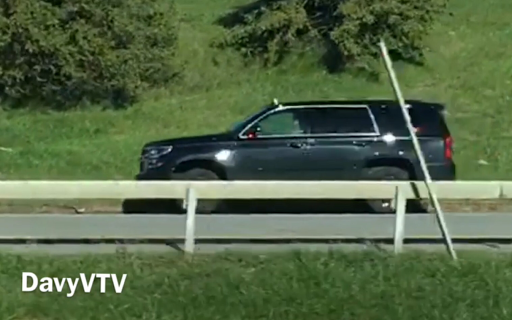 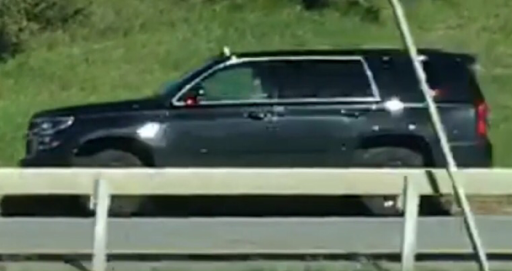